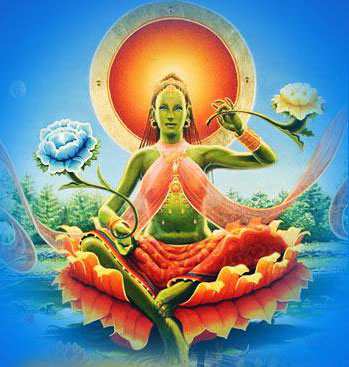 In the group of the Mahavidyas, Maa Tara comes next to Kali. Maa Tara closely resembles Kali in appearance. And just as Maa Kaali, Tara too displays gentle yet fierce aspects. Maa Tara is said to be more approachable to the devotees because of her maternal instincts. Tara meaning star, is seen as a beautiful but perpetually self-combusting goddess.

Following is the most effective mantra one chants to please Maa Taara:

Also known as Neel Saraswati, Maa Tara is quite similar in appearance as Maa Kaali. While Maa Kaali is described as black, Maa Tara is portrait as blue. Both wear a necklace of human skulls. However, Tara wears a tiger-skin skirt.

Chanting Mantra of Maa Tara- the blue goddess guides and protects; and helps to tide over hard turmoil of life. Maa Tara Mantra helps move on to the pathway of Salvation. Tara being the deity of accomplishments is strongly worshipped by entrepreneurs for success. Maa Tara who is described as a benevolent, compassionate, gentle and spirited young woman, eager to help and to protect as per Buddhists, the Mahavidya Tara is a rather fearsome goddess striking terror. She is also moody and harmful. Chanting the rosary with proper sanctity & pure worship also makes Tara-Mahavidya benevolent and compassionate. During the sagar manthan, Lord Shiva drank the poison to save the world from destruction. But Lord Shiva went unconscious because of the strong & powerful effect of the poison. At that point Goddess Durga appeared as Tara and saved lord Shiva. Such is the effect of Maa Tara worship & Mantra chanting, the savior Mantra.

Suffering from a dosha is the biggest trauma for any individual without being responsible for it. One of such Dosha is Pitra Dosha. To get relief from the suffering and agony created during malefic period of Pitra, Maa Tara Mantra must be chanted on daily basis for at least 108 times. It invokes the divine blessings of Maa Tara and helps get rid of the dreadful Pitra dosha which creates unexpected hurdles in life.

Main motive to chant Maa Tara Mantra is to gain sudden wealth & prosperity. Chanting Mantra with the greed of its fruits doesnot help. It needs devotion & concentration. Worshipping Maa Tara by heart & Mantra chants protect a person from the following:

The Tara Mantra protects the TEA Circle (Thoughts, Emotions, Actions) from negativity.People who regularly chant the Tara Mantra feel energized with positivity & gains tolerance bearing capacity. It is one of the most calming & relaxing Mantras.