The Legend of Rahu

The legend of Rahu (the eclipse): 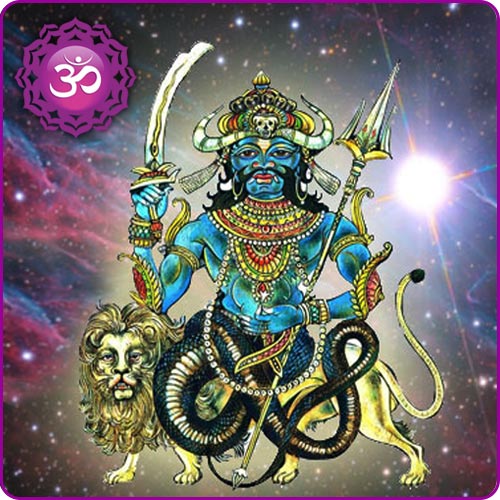 As it appears in the encyclopedia of Vedic history, the Srimad Bhagavata Maha-puranam: Canto VIII, Chapters 5-9 (circa 3,000 BC)... First a brief background of this ancient history.

At the beginning of creation, Lord Vishnu, the eternal Supreme Being, entered His own unmanifested material nature (Prakriti); from His navel was born the first being, Brahma (the four-faced), who is the empowered material creator; from Brahma's third eye, in anger, appeared the great Lord Shiva (destroyer of the cosmos), along with the demigods (devas) and the demons (asuras).

At this time there was a great attempt by the demigods and demons to churn the ocean of milk (primordial soup) to obtain the nectar of immortality. Lord Vishnu incarnated Himself as Kurma-avatar(the tortoise incarnation) to act as support of the churning rod, which was the cosmic Mount Mandara (center of the Universe); and the celestial serpent, Vasuki, was to be the churning rope. The demigods, being humble by nature, took hold of the tail of Vasuki, while the demons, who are always proud, took the fiery head; and thus the churning began.

During the churning process many wonderful things were produced, until finally the "amrita" or immortal nectar appeared. Immediately there was a fierce struggle and the demons forcefully took possession of the nectar. At that time, to help the demigods, Lord Vishnu, expanded Himself into Mohini-murti, the most enchanting of all beautiful goddesses. The demons, who were completely love-struck, allowed the Goddess to have the nectar, which she began to distribute amongst the demigods.

At that time, the great demon, Rahu, disguised as a demigod, entered the line of eager devas, between the Sun and Moon gods. As soon as the nectar was tasted by Rahu, he was exposed by the Sun & Moon gods, and Lord Vishnu, in His Mohini form, immediately severed Rahu's head with His Sudarshan Chakra (discus). Because Rahu had tasted the amrita his head became immortal, while his body fell away dead. Seeing this wonderful event, Lord Vishnu, then awarded Rahu the exalted post of Graha (planetary deity) as the malevolent North Node of the Moon.

Rahu still hates the Sun and Moon gods for the destruction of his body from the neck down, and he attacks the Sun and Moon out of revenge, following a schedule of eclipses, which are predicted and recorded to this day by astronomers and astrologers.

Rahu is by nature a malevolent planetary influence which can cause personal frustration, sacrileges habits, abuse of alcohol and drugs, possession of ghosts and demons, and infectious diseases. However, when located in a powerful spot in one's horoscope, Rahu can elevate one to positions of great wealth and power and confer public influence over the masses. Rahu is associated with serpents, fear, karmic retribution, and un-virtuous characters.

Persons with Rahu exalted are wealthy and fortunate. But those who have a weak or afflicted Rahu in their horoscope have a tendency to suffer from fear of supernatural phenomena and suicidal impulses. ULTRA-VIOLET is the cosmic color transmitted by Rahu through hessonite and other orange gems. Ultra-violet color waves are the coldest of all the cosmic rays and should only be used for ailments caused by extreme over-heating, i.e., high fever, hyper-acidity, indigestion, hyper-sexuality, insomnia, and during child birth. Rahu astral talismans may also help divert disasters, prevent insanity, counteract poisons, and protect one from demoniac influences. Rahu is particularly associated with scientific genius and the ability to deal successfully with people of lower status, such as servants, employees, and underworld characters.