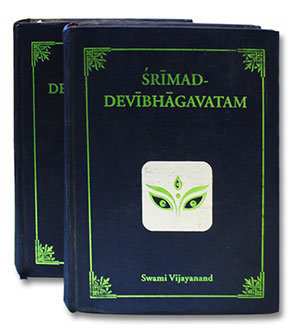 The Srimad Devi Bhagavatam
Translated by Swami Vijnanananda,
Originally published in 1921-1922,
Inscribed to the memory of Rai Bahadur Srisa Chandra Vidayarnava.
Book Eleven, Chapter Three
Â
---------------------
1-21:
---------------------
Sri Narayana said: "O Narada! There are six kinds of Achamana - (1) Suddha, (2) Smarta, (3) Paranik, (4) Vaidik, (5) Tantrik and (6) Srauta. The act of cleaning after evacuating oneself of urine and faeces is known as Suddha Saucha. After cleaning, the Achaman, which is performed according to rules, is named as Smarta and Pauranik. In places where the Brahma Yajna is performed, the Vaidik and Srauta Achamanas are done. And where acts e.g. the knowledge of warfare is being executed, the Tantrik Achaman is done. Then he is to remember the Gayatri Mantra with Pranava (om) and fasten the lock of hair on the crown of his head, thus controlling all the hindrances (Bighna Bandhanam). Sipping again, he is to touch his heart, two arms, and his two shoulders. After sneezing, spitting, touching the lower lip with teeth, accidentally telling a lie, and talking with a very sinful man, he is to touch his right ear (Where the several Devas reside). On the right ear of the Brahmanas reside Fire, Water, the Vedas, the Moon, the Sun and the Vayu (wind). Then one is to go to a river or any other reservoir of water, and there to perform one's morning ablutions and to cleanse his body thoroughly as the body is always unclean and dirty and various dirt are being excreted out of the nine holes (doors) in the body. The morning bath removes all these impurities. Therefore the morning bath is essentially necessary. The sins that arise from going to those are not fit for such purposes, from accepting gifts from impure persons or from the practice of any other secret vices all are removed by the morning ablutions. Without this bath, no acts bear any fruit. Therefore every day, this morning bath is very necessary. Taking the Kusha grass in hand, one is to perform one's bath and Sandhya. If for seven days, the morning ablutions are not taken, and if for three days, the Sandhya are not performed, if for twelve days, the daily Homas be not performed, the Brahmanas become Sudras. The time for making the Homa in the morning is very little; therefore lest ablutions to be done daily which would take a long time and hence the time for the Homa might elapse, the morning bath should be performed quickly. After the bath the Pranayama is to be done. Then the full effects of the bath are attained. There is nothing holier in this world or in the next than reciting the Gayatri. During the time of Pranayama, one must control one's Prana and Apana Vayus i.e. make them equal. The Brahmin, knowing the Vedas and devoted to his Dharma, must practice Pranayama three times with the repetition of Gayatri and Pranava and the three Vyarhitis (Om Bhu, Om Bhuvar, and Om Svah).

While practicing, the muttering of the Gayatri is to be done three times. In Pranayama, the Vaidik manta is to be repeated; never a Laukika Mantra is to be uttered. At the time of the Pranayama, if anybody's mind be not fixed, even for a short while, like a mustard seed on the apex of a cowborn, he cannot save even one hundred and one person's in his father's or in his mother's line. Pranayama is called Sagarbha when performed with the repetition of some mantra; it is called Agarbha when it is done simply with mere meditation, without repeating any mantra. After the bathing, the Tarpanam with its accompaniments is to be done; i.e. the peace offerings are made in reference to the Devas, the Risis, and the Pitris (whereby we invoke the blessings from the subtle planes where the high souled persons dwell). After this, a clean pair of clothes is to be worn and then he should get up and come out of the water. The next things preparatory to practice Japam are to wear the Tilaka marks of ashes and to put on the Rudraksa beads. He who holds thirty-two beads of Rudraksa on his neck, forty on his head, six on each ear (12 on two ears), twenty-four beads on two hands (twelve on each hand), thirty-two beads on two arms (sixteen on each), one bead on each eye and one bead on the hair on the crown, and one hundred and eight beads on the breast (251 in all) becomes himself Maha Deva. One is expected to use them as such. O Muni! You can use the Rudraksas after tying, stringing together with gold or silver always on your Sikha, the tuft of hair on the head or on your ears. On the holy thread, on the hands, on the neck, or on the belly (abdomen) one can keep the Rudraksa after one has repeated sincerely and with devotion the five lettered mantra of Siva, or one has repeated the Pranava (Om). Holding the Rudraksa implies that the man has realized the knowledge of Siva-Tattva. O Brahmin! The Rudraksa bead that is placed on the tuft or on the crown hair represents the Tara tattva i.e., Om Kara; the Rudraksa beads that are held on the two ears are to be thought of as Deva and Devi.
Â
---------------------
22-37:
---------------------

The one hundred and eight Rudraksa beads on the sacrificial thread are considered as the one hundred and eight Vedas (signifying the Full Knowledge, as sixteen digits of the Moon completed; on the arms, are considered as the Dik (quarters); on the neck, are considered as the Devi Sarasvati and Agni (fire). The Rudraksa beads ought to be taken by men of all colors and castes. The Brahmans, Ksattriyas and Vais'yas should hold them after purifying them with Mantras i.e. knowingly; where the Sudras can take them without any such purification by the Mantras i.e. unknowingly. By holding or putting on the Rudraksa beads, persons become the Rudras incarnate in flesh and body. By this all the sins arising from seeing, hearing, remembering, smelling, eating prohibited things, talking incoherently, doing prohibited things, etc. are entirely removed with the Rudraksa beads on the body; whatever acts, eating, drinking, smelling, etc. are done, are as it were, done by Rudra Deva Himself. O Great Muni! He who feels shame in holding Rudraksa beads has defects in his birth (is a bastard). There is no doubt in this. It is by holding on to Rudraksa that Brahma has remained steady in His Brahmahood untainted and the Munis have been true to their resolves. So there is no act better and higher than holding the Rudraksa beads. He who gives clothing and food to a person holding Rudraksa beads with devotion is freed from all sins and goes to the Siva Loka. He, who feasts gladly any holder of such beads at the time of Sradh, goes undoubtedly to the Pitri Loka. He, who washes the feet of a holder of Rudraksa and drinks that water, is freed of all sins and resides with honour in the Siva Loka. If a Brahmana holds with devotion the Rudraksa beads with a necklace and gold, he attains Rudrahood. O Intelligent One! Wherever whoever holds with or without faith and devotion the Rudraksa beads with or without any mantra, is freed of all sins and is entitled to the Tattvajnana. I am unable to describe fully the greatness of the Rudraksa beads. In fact, all should by all means hold the Rudraksa beads on their bodies.

Note: The Number one hundred and eight (108) signifies the One Hundred and Eight Vedas, the Brahman, the Source of all Wisdom and Joy. Here ends the Third Chapter of the Eleventh Book on the glories of the Rudraksa beads in the Maha Puranam Sri Mad Devi Bhagavatam of 18,000 verses by Maharsi Veda Vyasa.