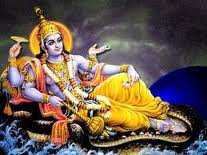 Vaikunta Ekadashi festival is observed with all solemnity in the temples of Lord Vishnu. It was on this day that during the "Samudra Manthan" (churning of the Milk Ocean), 'Amrit' (nectar) emerged out of the ocean and was distributed to the demigods. The Hindus consider this day very auspicious and it is believed that those who die on this day are freed from the rounds of birth and death; they directly reach Vaikunta, the abode of Lord Vishnu.

All the gods headed by Lord Brahma and Lord Shiva assemble on this day in Vaikuntam, the Divine and Holy Abode of Lord Vishnu. Hence this Ekadashi is called as Vaikunta EkadashiÂ or Mukkoti (Mukkoti = 3 crore) Ekadashi.

In this Kali Yuga, even if just one Ekadashi is observed with dispassion, faith and devotion, and if the mind is wholly fixed on Hari, one is freed from the rounds of birth and death. The scriptures give us their assurance on this point.

Devotees have to fast on this day and have to do Hari Japa, Hari nama sankeerthana, Sri Vishnu Sahasranaama paarayana with Sri Laxmi ashtothara. Those who are unable to fast completely can take some light fruits and milk. The saastraas are clearly stating that

No rice should be taken on Ekadashi days. This is very important. The sweat that fell down from the head of Brahma assumed the form of a demon and said to the Lord, "O Lord! Now give me an abode to dwell." Brahma replied, "O demon! go and dwell in the rice particles eaten by men on Ekadashi day and become worms in their stomach." For this reason rice is prohibited on Ekadashi.

If one observes the Ekadashi fast regularly, Lord Hari is propitiated. All sins are destroyed. The mind is purified. Devotion gradually develops. Love for God becomes intense. Orthodox people in South India observe complete fasting and vigil even on ordinary Ekadashi days. For the devotees of Lord Vishnu, every Ekadashi is a very sacred day.

Benefits of Fasting:
Fasting controls passion. It checks the emotions. It controls the senses also. It is a great penance. It purifies the mind and the heart. It destroys a multitude of sins. Fasting controls the tongue in particular which is the deadliest enemy of man. Fasting overhauls the respiratory, circulatory, digestive and urinary systems. It destroys all the impurities of the body and all sorts of poisons. It eliminates uric acid deposits. Just as impure gold is rendered pure by melting it in the crucible again and again, so also this impure mind is rendered purer by repeated fasting.

Young and robust Brahmacharis (celibates) should observe fasting whenever passion troubles them. Only then will they have very good meditation, as the mind will be rendered calm. The chief object of fasting is to render the system calm so that one is able to practice meditation rigorously during that period.

Withdraw the senses and fix the mind on God. Pray to God to guide you and to throw a flood of light on your spiritual path. Say with feeling: "O God, guide me! Protect me, protect me! I am Thine, I am Thine! Forsake me not!" You will be blessed with purity, light and strength. Follow this Sadhana on the days that you fast, Ekadashi days in particular.
Fasting is one of the ten canons of Yoga. However, avoid excessive fasting. It will produce weakness. Use your common sense. If you cannot fast for the full twenty-four hours, at least fast for 10-12 hours and then take some milk and fruit. Gradually increase your fast to 15 hours and then up to 24 hours. Fasting makes a man strong, both spiritually and mentally.

In his code, the Manu Smriti, the great Hindu law giver, Manu, prescribes fasting for the removal of the five capital sins. Diseases that are pronounced incurable by doctors are cured by fasting. Occasionally, a complete fast is greatly desirable for all to keep up good health, to give adequate rest to the internal organs and maintain celibacy. All diseases in this modern world have their origin in overeating and low exercise like follows - Over-weight, Obesity, Angina, Myocardial Infarction (heart attack), Arthritis, Diabetes Mellitus etc. Fasting, control over eating and moderation over the food is the only method to cure this.

Complete fasting helps to control sleep. Taking recourse to tea to control sleep is not desirable. You will not gain any spiritual strength if you depend on an external agent. During fasting avoid all company. Live alone. Utilize your time in Sadhana. When breaking a fast do not take a heavy meal or a heavy food that is hard to digest. Milk or some fruit juice is beneficial.

Moderation in eating and withdrawal of the senses in Yogic meditation is the obverse and the reverse of the same coin. Moderation consists in taking a little food or water just to keep the body in good working order.

In the Gita you will find: "Verily, Yoga is not for him who eats too much, nor who abstains to excess, nor who sleeps too much, nor to the excessively wakeful". The Yogi withdraws his senses from the particular sense objects. The senses are made to turn into or get involved into the mind. When one is fully established in these two practices, supreme control of the senses is achieved.

King Ambarisha was a great devotee of Lord Hari. He practiced the Ekadashi Vrata for a year. Ambarisha obtained Lord Vishnu's Grace. On one occasion he fasted for three consecutive days. He was about to break the fast when Rishi Durvasa appeared as his guest. The king received him with due respect and requested him to take his meals. The Rishi agreed and went to bathe in the river. The king waited patiently for a long time, but the Rishi did not return. Time was running out; if the king did not eat anything before the day ended his Vrata would not bear fruit. And if he ate, he would be showing disregard to the Rishi. As a compromise the king took a little Tulasi water to serve both the conditions.

When Durvasa returned from his bath, he knew exactly what had happened, and was angry. He tore a hair from his tuft, which took a form of a Demon and charged it to kill Ambarisha. The king was unmoved. The Holy Discus of Lord Vishnu, Sudharshana Chakra appeared and destroyed the power/Demon of the hair of Durvasa. It now followed the Rishi wherever he went and tried to destroy him.

Rishi Durvasa went to Brahma and Shiva for help, but to no avail. Lord Shiva and Lord Brahma advised Durvasa to beg forgiveness of Lord Hari. Then, Durvasa went to Lord Hari who said to him, "I am dependent on My devotees. Me, My heart and My weapons are in the possession of My devotees. Go thou, therefore, to Ambarisha; beg his pardon and if he does pardon you, thou shalt be saved."

Sage Durvasa did as advised by Lord Vishnu, fell on the feet of King Ambarisha and begged the forgiveness of the Great Devotee. Ambarisha, thereupon prayed to the Sudharshana Chakra, the Weapon of Lord Hari, to desist from its course, and saved the Rishi. Durvasa thanked him from the bottom of his heart.

Vishnu sahasra naama paarayana will give the best to the Sadhakas and even the graha and jaathaka doshas are also cleared with this paarayana. A combination of Laxmi stotra with Vishnu sahasranaama is highly powerful. Hence, Laxmi ashothara or Sri Kanakadhaara stava can read at the end of the paarayana. Nama Sankeerthana is more powerful and the God will be pleased with the Nama sankeerthana.Even in Gurucharitra also, Sreeguru told that, whoever sing my Nama with full faith and dedication on me, I will take care of them and I will give them what is necessary without any troubles or problems in their families. So doing Hari Nama sankeerthana give the feelings of Hari's presence on this day to every devotee.
Related Testimonials
Rudra Centre Videos