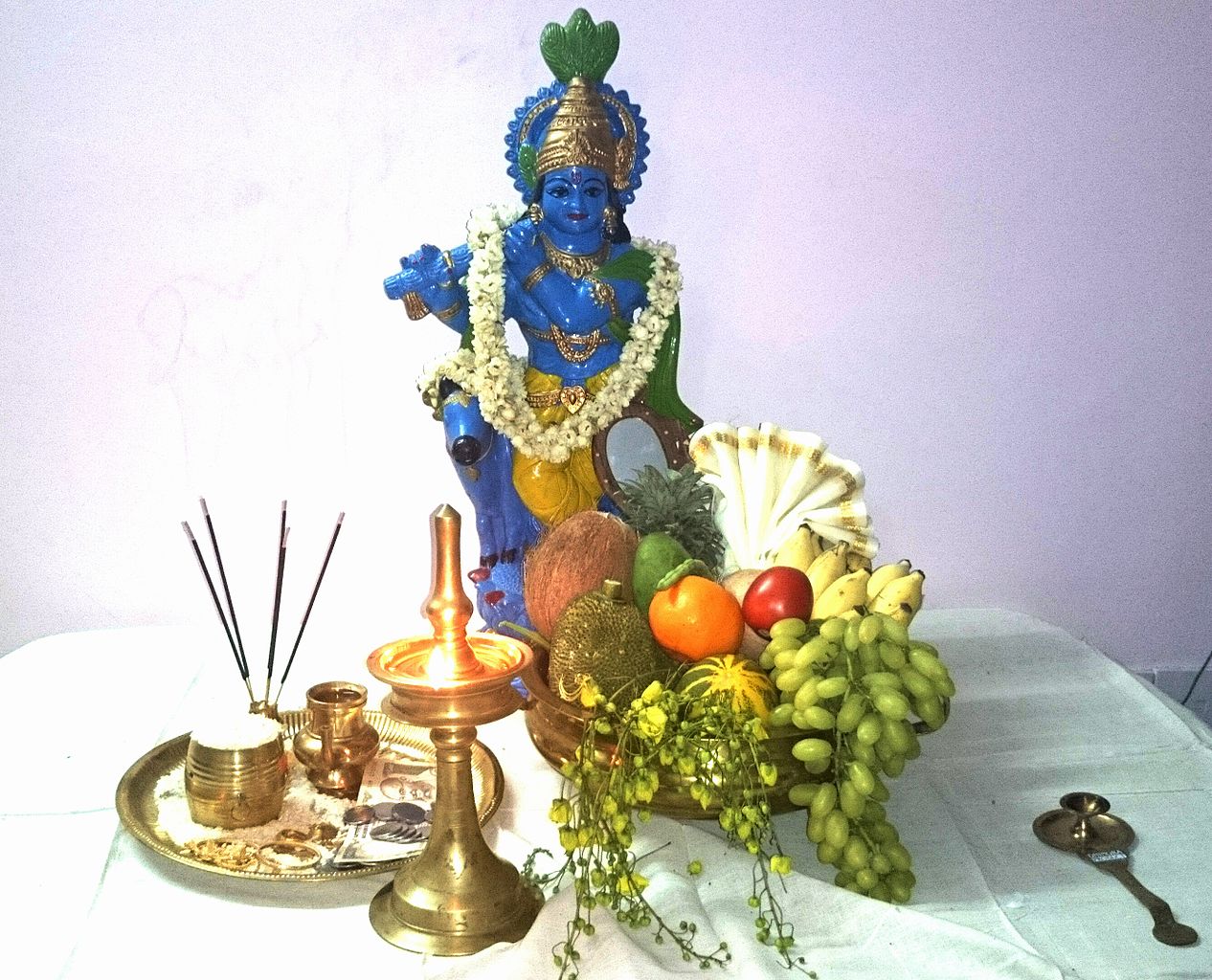 Vishu is a Malayalam New Year which is celebrated with great fervour by the Hindu Malayalis or the Tuluvas and the Keralites in the state of Kerala, Tamil Nadu, Karnataka, Mahe district of Union territory of Pondicherry and also the diaspora communities. It is the festival of harvest which is celebrated by every household in Kerela. The Hindu Malayalis however, observe this day as their New Year as mentioned above. They worship Lord Vishnu and His avatar Shri Krishna on the occasion of Vishu. According to the ancient belief, Lord Vishnu is considered to be the God of Time, hence on the first day called ‘Vishu’of the astronomical year, people offer prayers to Lord Vishnu.

The Vishu Kani festival marks the first day of the ‘Meddam’ which is a Malayalam month, which according to the Gregorian calendar falls in the months of April and May. The word ‘Vishu’ in Sanskrit literally translates to ‘equal’. As mentioned earlier, it is a Malayalam festival that symbolises the Spring season and celebrates the Spring equinox. Vishu is a day that has an equal number of hours in the day as well as at night. It is a festival that celebrated the Spring festival and is known by different names in different parts of the country such as Ugadi in Andhra Pradesh and Karnataka, Bihu in Assam and Baisakhi in Punjab.

This year the festival of Vishu falls on the Saturday, 15 April 2023.

According to Hindu Astrology, on the day of Vishu, the planet Sun transits to the zodiac Aries which is also known as the Mesha Rashi. On this day, the farmers plough their fields and also carry out various agricultural activities.

Bhaskara Ravivarman, an ardent devotee of Lord Vishnu and a ruler who ruled Kerala between AD 962 and 1021, in his incomplete work named ‘Trikodithanam Shasanam’ mentioned about the ‘Chithira Vishu’. Vishu began to be celebrated across Kerala with pure devotion and zeal during the reign of Sthanu Ravi who ruled between 844 and 855 AD. According to many Scriptures, it was on the day of Vishu that Lord Krishna, an incarnation of Lord Vishnu killed the demon named Narkasura. According to other mentions, a long time ago there lived Ravana who was the King of Lanka. He did not allow Surya devata (Lord) to rise from the East. It is mentioned that, on the day of Vishu, when Lord Rama, the seventh incarnation of Lord Vishnu killed Ravana, the sun started rising from the East direction.

The festivities of Vishu have been celebrated with great devotion and vigour by the Malayalis for more than 1,178 years and they are still being practised across the Nation by people belonging to the Malayalam community all over the world in the traditional form.

Vishu festival is an extremely potent and auspicious time period where Lord Vishnu and Lord Krishna are worshipped. Family members come together on this occasion and celebrate the Vishu together. The Vishu celebrations comprise of many aspects namely the Vishu Kani, Vishu Phalam, the Vishu Kaineettam, Vishu Sadya, Vishu Padakkam and Vishu greetings. Let us now understand in detail about each of these rituals. 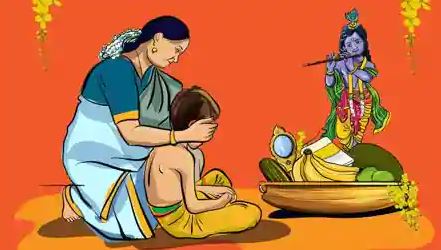 Vishu Kani also written as Vishukkani, is an age-old important ritual performed by Malayali people at the dawn of Vishnu morning. This ritual comprises viewing auspicious objects early in the morning directly after waking up at dawn on a Vishu morning. It is believed that whatever a person sees after opening his/her eyes on the Vishu morning will determine or predict the finances and prosperity the coming year will bring. Hence, a night prior to the Vishu Kani people make arrangements by placing auspicious objects in a bell-shaped metal Urli and by lighting Nilavilakku (traditional lamp lit in Kerala).

The Vishu Kani is a symbolic representation of good luck and prosperity. The word ‘Kani’ in the Malayalam language translates to ‘which is viewed first’. Thus, the term ‘Vishu Kani’ means viewing all auspicious objects first thing after getting up from sleep at the dawn or in the early hours of Vishu morning. It is like opening your eyes to all the auspicious objects in order to experience a great prosperous year ahead. The Vishu Kani is arranged and prepared by the eldest woman of the family. It is a sacred ceremony where all auspicious goods and items like Yellow Kani Konna flowers, Betel leaves, coconut, raw rice grains, food grains, fresh lemons, betel nut, Areca nut, Kanmashi (kajal), jackfruit, metal mirror, golden cucumber, jack fruit, cotton dhoti, a holy book, coins and currency notes. Also, as mentioned above, a metal Nilavilakku is lit and placed next to the Uruli or Vishu Kani in front of the Lord Vishnu idol or Lord Krishna idol. As the sun rises on the day of Vishu, all the family members wake up but do not open their eyes as a part of the age-old traditional belief that they follow. The whole family with closed eyes walk towards the area where the Vishu Kani is arranged and then open their eyes to view all products that are arranged carefully for Vishu. The Vishnu Kani is arranged with a positive thought and a good vibe that God’s grace is upon you, and the coming year will be a blessing. Vishu Kani is also arranged in temples and many people also visit the temples on the morning of Vishu for performing Vishu Kani. Once the Vishu Kani is performed, all the members of the family sit together and one of them recites verses from the Ramayana loudly. This again is one of the most important rituals during Vishu.

After seeing the Vishu Khani, people recite verses from Ramayana, the Holy book of the Hindus, which is considered to be a sacred act. Malayalis believe that the first page of the Ramayana which is opened by the devotee has a significant impact on his/her life in the upcoming year.

As an Astronomical New Year, Vishu is considered highly auspicious and important in the states of Kerala, Andhra Pradesh, Karnataka, diaspora communities and many more. The word Vishu Phalam literally translates to ‘prediction for the upcoming year’. In the olden days, an expert astrologer from within the town went door visiting the ‘Illams’ (Traditional Kerala houses) making predictions about each family member about the next one year. However, nowadays, the Vishu Phalam is published in popular Jyotish magazines.

Vishu Kaineetam is a traditional custom where the elders of the family and friends give gifts to children on the day of the Vishu festival. In earlier days, adults would gift the children money coins, but today, people also gift children with currency notes as Vishu Kaineetam. 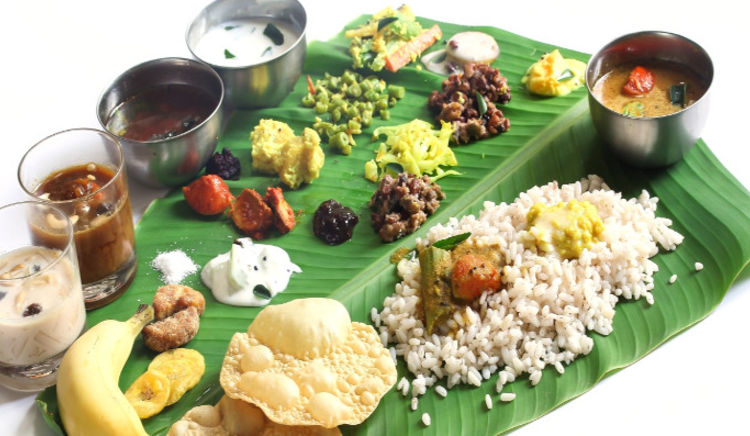 Sadhya refers to a grand feast. On the day of Vishu, a traditional breakfast called the Vishu Kanji is made. Kanji means porridge. Thus, the breakfast is made by boiling, rice in coconut milk and adding a few spices to it. The Vishu Sadya is an ancient festival delicacy prepared in every traditional Malayalam house in Kerala during the occasion of Vishu. After breakfast is done, traditional Malayalam delicacies are cooked for lunch. Thus, Vishu Sadya is performed on Vishu.

The word ‘Padakkam’ in Malayalam refers to firecrackers. After breakfast on Vishu, youngsters step out of their houses to burst firecrackers. Elders too join the fun and accompany the kids as a part of the traditional activity.

People greet friends and family by exchanging greetings of Vishu. They wish each other by saying ‘Vishu Ashamsakal’ which literally translates to ‘Greetings on Vishu’.

Thus, like every Indian festival, Vishu holds great significance in the Southern part of the country and has a rich history associated with it. Let's celebrate Vishu this year in the traditional way and spread happiness across faces.