Why We Offer Arghya to Surya

» Puja Items, Meditation Accessories » Why We Offer Arghya to Surya 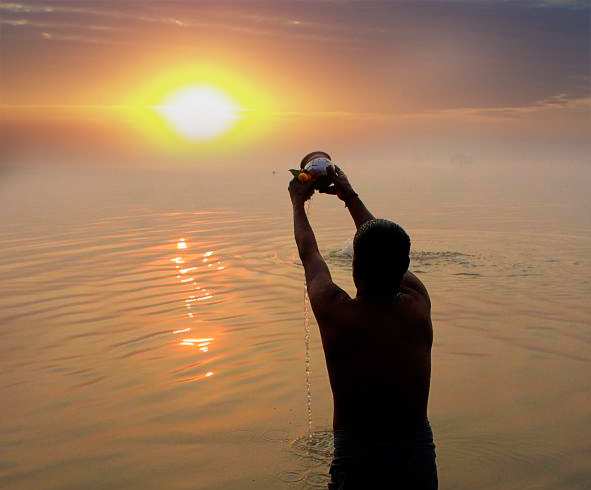 Why We Offer Arghya to Surya

The brightly shining Sun signifies the power of the Universal Consciousness. Our Vedas declare the Surya to be the creator of the material universe. Being the Soul of all, he is the provider of intellectual wisdom, vision, discrimination, self-realisation, light and life to the world. This makes the Sun is the king of the sky, the Light Giver and generator of the Universe. The year is the wheel of the Sun’s chariot and the twelve spokes of the wheel are the twelve months.

In India, the Sun God is believed to be an incarnation of Lord Vishnu. Surya Narayana is worshipped at temples in Andhra Pradesh and at the Konark Sun temple in Odisha. Festivals such as the Makar Sankranti are celebrated to thank the Sun for a good harvest and the first grain is offered to him. Chhath is another important Hindu festival for worshipping Surya Devta. The practice was initiated by Karna, son of Surya, who worshipped the Sun ritually and gained supreme powers, growing resplendent like him.

Yet another festival dedicated to the Sun is the Samba Dasami. It is named after Samba, the son of Lord Krishna, who was cured of leprosy after praying to Surya. The festival of Ratha Saptami is also observed as Surya Jayanti because it celebrates the power of Sun God, an incarnation of Lord Vishnu. On this day, Lord Vishnu is worshipped as Surya. The practice of Sun worship was also followed by Draupadi, a staunch devotee of Surya Dev. Her devotion had earned her the power to cure the deadliest of diseases.

According to the Garuda Purana, thirty crore demons called Mandehas are orbiting the path of the Sun, trying to swallow it at dawn and dusk. Water offered to the sun with folded hands (arghyam) during the Sandhya upasana is transformed into a thunderbolt that destroys these demons, banishing them to the island of Aruna. The Garuda Purana warns that one who does not attend to this sandhya rite, kills the sun.

Mandehas are nothing but the mind and body, which cloud the sun of the Atman within you. In the morning and evening, when your mind, body and senses are out of control, sadhana and prayers are needed to still them and bring illumination within. By offering water, which is your identity residing in the Swathisthana chakra, you purify yourself through the light and wisdom of the Sun. Similarly, Gayatri purifies you with this offering so that the inner light can be perceived. After the arghyam, the devotee should say: “Asavadityo Brahma, Brahmaiva Ahamasmi” (the Sun is verily the Brahman. Brahman is Myself). Thus in the spiritual sense, arghyam is a reminder to us of the Brahman within. This Brahman is honoured with the offering of mantra and water.

Sun worship in the early morning promotes the absorption of Vitamin D and Calcium into the body, which is especially beneficial for women. Moreover, the body and mind of sun worshippers is ideally suited for infusion of cosmic solar energy. In ancient India, rishis were able to live without food since they absorbed energy directly from the sun’s rays.

When you offer water to the Sun, the sunlight splits into seven rays of the rainbow, like a prism fragmenting a ray of light into seven colors. When the person offering water looks through that stream of flowing water, over the edge of the container, this dispersed light enters their body and balances the seven colors within the body.

In Hinduism, water can only be offered to the sun at dawn and dusk. Seeing the sun through the falling water droplets which split the sunlight into seven colours is very beneficial for eyes. Practiced regularly over years, this ritual strengthens the eyesight. People who do this for years have a probability of wearing glasses.

This practice brings discipline in life as it makes you rise before sunrise. In the evening, you will be compelled to finish work in a timely manner for offering water to sun.

Surya Arghyam is spiritually beneficial as it cools the mind due to prayers involved in the ritual.

How to do Surya Arghyam

The best time for this ritual is within one hour of sunrise. Wash your hands, legs, arms and face. Take a copper vessel filled with water. Add red sandal powder or kumkum to it with a red flower. Now go out where you can see the Sun. If it’s cloudy and you can’t see the Sun, look east assuming the Sun is there.

Now lift the vessel towards the Sun and start pouring the water slowly. Look into the rays of Sun through the water streaming from the vessel.

Pour the water slowly so that you can recite the mantra at least eleven times before the water runs out.

Now touch the spilled water with your right hand and bring these fingers to your forehead. Wet them again by touching the water, then touch them to both eyes and lastly to your throat.

When you leave, try not to trample on the (spilled) water which you offered to the sun.

Your body have various energy points. When you offer water to the Sun and recite the mantra, this water gets charged. Touching this water to your body will stimulate those energy points, giving you immense energy and recharging both body and mind.