Who is Goddess Durga and what are Her Powers?

» Yantras and MahaYantras » Yantras » Durga and Devi Yantra for Power » Who is Goddess Durga and what are Her Powers? 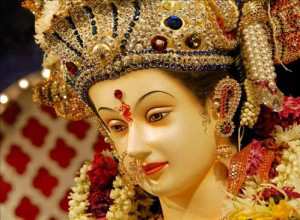 Whenever satanic forces rise to unsettle the workings of Cosmos, the Supreme Creator through His inconceivable energies checks such forces at once. Goddess Durga is one of the female energies of the Supreme Absolute who is known as Devi, Shakti, the unconquerable force. She is considered as the purest root cause of creation, maintenance and destruction.

The origin of this divine female energy (Durga) is mentioned in the Shiva Purana. Before the cosmic creations, Shiva invoked Her from His left Half and created Shivloka with Her help. It further states the demonic son of Rambha named Mahishasura once created havoc on Bhuloka (earth) and defeated all the gods of heaven, endangering their existence. After hearing such events, Lord Vishnu discharged a huge mass of light from His mouth that merged into the similar rays emitted from the mouths of those gods. This powerful light morphed into a powerful female deity called Durga who challenged Mahishasura for a battle.

Mahishasura's entire army packed with evil-minded soldiers such as Chikshur, Chamar, Asiloma, Vidalaksha, Durdhara, Mahahanu and others assaulted Durga at once. Armed with the celestial weapons, Goddess Durga took on all of them with her matchless brutality and beheaded Mahishasura who tried to kill her in various animal forms.

What are the divine weapons of Goddess Durga?

Durga with Her super charged weapons slays all the demons torturing Bhumi (Earth) and liberates the humble minds from the clutches of evil forces. She is the Fire energy of creation and life, and the power of Lord Shiva. Goddess Durga has divine weapons that carry special meanings.

Trishul: The Trident of Lord Shiva is the chief weapon of Duga which no enemy can escape, how much powerful they may be. Her Trident symbolizes the three gunas - Sattva, Rajas and Tamas. It is considered to be one of the most powerful weapons by the Vedas.

Sudarshan Chakra: It signifies the power of Goddess over the entire Universe. It was given to Her by Lord Vishnu.

Conch Shell (Shankha): Gifted to Goddess Durga by the aquatic god Varuna, It is the emblem of the sacred sound of Om being the most embryonic sound of cosmos.

Bow and Arrow: They signify both potential (bow) and kinetic (arrow) energies of Durga. It points to the fact that Maa Durga is in control of all energies of the cosmos.

Thunderbolt: The Thunderbolt is possessed by the King of Heaven Lord Indra who gifted a thunderbolt that had all the powers of the original Thunderbolt. Thunder personifies rage and anger that Durga manifests during her battle with hostile forces.

Sword: The shrill blade of this sword indicates divine knowledge that gleams through all the darkness.

Half-bloomed lotus: It is a sign of humility and triumph. It symbolizes the lotus growing amidst mud and human mind that must develop spiritually amidst the mud of worldly pleasures.

What are the nine forms of Devi Maa?

According to Vedas, Goddess Durga is a divine symbol of power, worshipped in nine different forms. All those nine manifestations of Goddess Durga are worshipped by Her devotees during Navaratri. 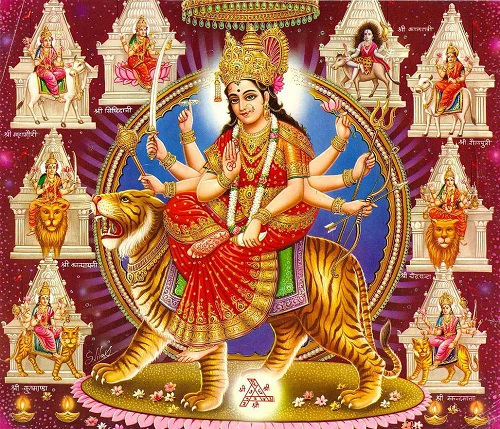 Following are the nine forms of Durga:

Glory of Durga in Durga Chalisa:

Goddess Durga has always been a divine object for meditation, Bhakti, prayers and guidance since ages. She is deeply gloried by in the Durga Chalisa, Forty-hymn treatise that vividly praises Her presence, conquest of enemies, Vedic wisdom and mercy on the conditioned souls living on Earth.

Shiv Yogi Tumhre Guna Gaven | Brahma Vishnu Tumhen Nit Dhyaven says the Durga Chalisa meaning Lord Shiva and all yogis always chant her praise. Even the creator Brahma, the preserver Vishnu and all other gods of heavens ever meditate on her.

She also appears in the form of Goddess Saraswati to grant wisdom to the sages and thus ensure their welfare. She is also Mother Amba who once accompanied, as the female energy, Lord Visnhu in His divine form of Narismha to save Maharaja Prahlaad from the cruel hands of Demon Hiranyakashyap who attained liberation because he was killed by the death personified Vishnu accompanied by Goddess Durga.

Meaning:
" She is the one being most auspicious and blesses the world with divine auspiciousness. Being the purest and the holiest, She protects the surrendered souls and is called the Divine Mother of the three worlds. She is Gauri, daughter of the mountain king. We offer our obeisance to Durga again and again. We worship Her "

Meaning:
" OM! May we be released from all miseries in life and gain riches, wealth and prosperity and tread the righteous path free of doubts "

Meaning:
" Hearing this mantra, may we achieve peace in every difficult phase of life and be forever free from nightmares. We pray to Durga for liberation from every kind of negative, fearful dream & thought "

Meaning:
" May Divine Mother Durga pacify the child suffering from spectral problems and haunted by spirits. May the child be blessed by Durga Devi who is ever compassionate and eliminates negative energy that is haunting him "