The samsara of life and death is cyclical until we attain moksha. In Sanatan Dharma, Mahabali, Ashwatthama, Ved Vyas, Hanuman, Vibhishana, Kripacharya, Parshuram, and Markandeya are the eight immortals known as Astha Chiranjeevis. They have lived from one Satyug to another. They still exists on earth, and will remain alive until the next Satya Yuga. In Sanskrit, Chiranjeevi means a long-lived person. ‘Chiram’ means long and ‘Jivee’ means lived. They have been mentioned in the Ramayan, Mahabharat and the Puranas. 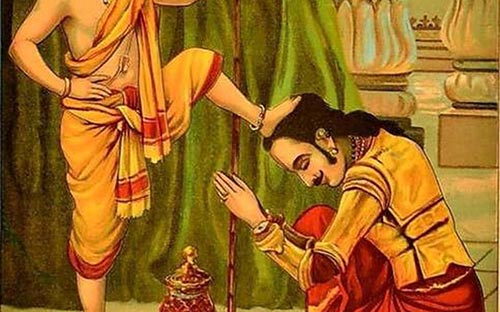 Mahabali is the King of Asuras. He is the grandson of Prahlad and a descendant of sage Kashyap. Bali hadarranged Ashwamedha Yagna, to maintain his dominance over the three worlds. This created tension and insecurityin heaven and amongst the Gods. So, the Devas requested Lord Vishnu to help them. Vishnu manifested in hisVaman avatar and asked Bali, to grant him a piece of land to traverse three steps. As a result, Vaman traversed theearth and heaven in two steps. Bali offered his head and pushed Mahabali to Paatal Lok. Pleasedby Mahabali’s devotion, Vaman blessed Bali with the powers of Indra. Due to Bali’s selfless devotion and dharma, he was granted to pay a visit, to his land once each year. Thus, the Onam festival is celebrated every year in Kerala. 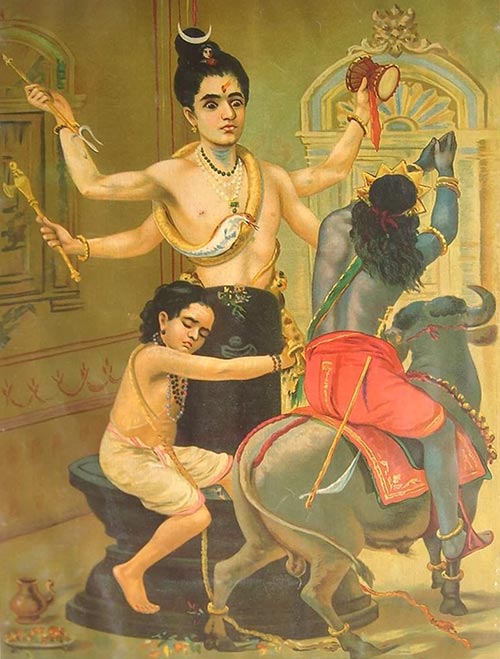 A devotee of both, Shiva and Vishnu, rishi Mrikandu, belonged to the Bhrigu clan. Mrikandu and his wife Marudmati,sought a boon from Shiva, for begetting a son. He was given the choice of either being blessed with a son, with a short life span, or a child of low intelligence with a long life. Mrikandu, chose the former, and was blessed with Markandeya, an exemplary son, who was fated to die at 16 years of age.

Markandeya was a great devotee of Shiva. On the day of his death, he continued to worship theShivalingam. Yama, the ‘God of Death’, did not have the heart to take Markandeya’s life, because of his devotion forShiva. Yamraj, then came in person to take away Markandeya’s life, and sprung his noose around the young sage’sneck. The noose mistakenly landed around the Shivalingam. Shiva emerged in fury and attacked Yama. Later, Shivarevived Yama and blessed him with immortality. Hence, Shiva was known as Kalantaka, the ‘Destoyer of Death.’ 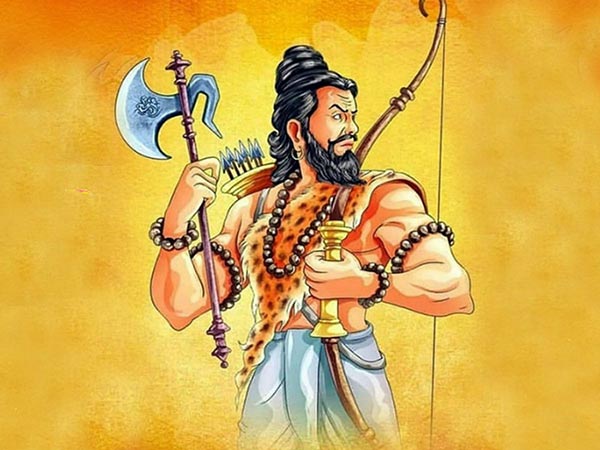 The weapon-wielding temperamental avatar of Vishnu, Parshuram, was a warrior and equally feared and respected by many. He was born in Brahmin family and was quite unlike the other Brahmins. Parshuram carried traits of a Kshatriya. He was aggressive, brave and well-trained in warfare. He is known as ‘Brahma-Kshatriya’, as he had skills from both the clans.

Parshuram is a martial Shraman ascetic and an Avesha avatar. He was born at Renuka Tirth, as the sixth incarnationof Lord Vishnu. His father, Jamadagni, a great Saint Bhargva, was a direct descendant of Lord Brahma. It is said thatKartavirya Arjuna and his army forcibly took away Parshuram’s father’s magical cow named Kamdhenu. Parshuramkilled the entire army and king Kartavirya. To avenge the death of his father, Kartavirya’s son, killed Jamadagni, inParshuram’s absence. Parshuram was furious and killed all the sons of kings. He also conducted the Ashvamedha sacrifice, and gave away his entire holdings to the karmakandis, who conducted the ritual.

In the Mahabharata, Parshuram, was the Guru of the warrior Karna. Parshuram gave the Sudarshan chakra to Krishna. The main motto of Vishnu’s sixth incarnation was to free the earth’s burden, by assassinating the sinful andirreligious kings, who neglected their respective duties. As mentioned in the Kalki Purana, Parshuram still resides onearth. Parshuram is the martial guru of Kalki. He instructed Kalki, to perform a sacrament to appease Shiva, whoblessed Parshuram with celestial weaponry. 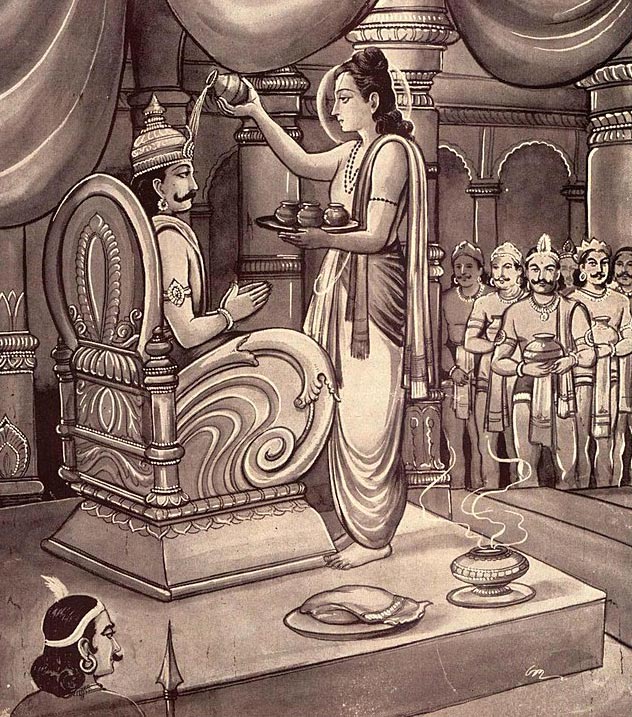 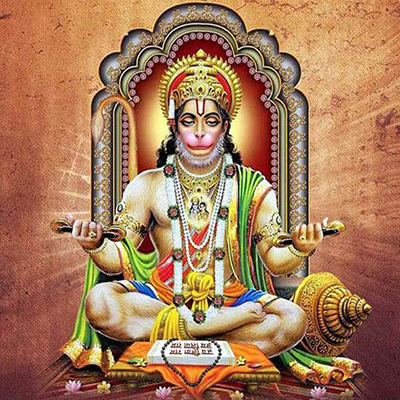 Hanuman was born to Anjana and Kesari. While Hanuman’s mother was worshipping Shiva, king Dashrath ofAyodhya, performed the ritual of Putrakam yagna, since he desired to bear children. Dashrath was offeredkheer, which was shared by his three wives, leading to the birth of Ram, Lakshman, Bharat and Shatrughna. As thestory goes, through divine intervention, a kite snatched and delivered kheer to Anjana. Vayu, the wind God delivered the kheer to Anjana As a result, Hanuman was born. The Sundara Kanda in the Ramayan, focusses on Hanuman, who met Ram, after Ravan had kidnapped Sita. Hanuman helped them to defeat Ravan and rescue Sita. 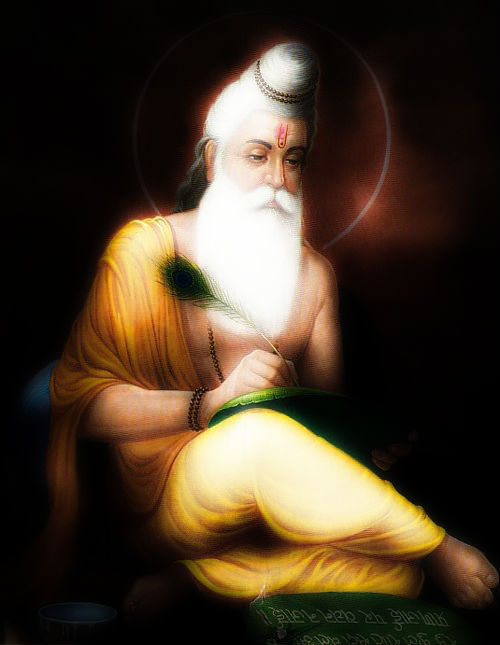 Ved Vyas is also known as Krishna Dvaipayana. Around 5000 years ago, he was born in Damauli of Tanahi district in Nepal. His father was sage Parashar Rishi and his mother was Satyavati. He was the grandfather to Pandavas and Kauravas. He taught the Vedas to his pupils with immense devotion and dedication. It is said that Mahabharata is the 18th Purana that was written by Ved Vyas. It is believed that Ved Vyas requested Lord Ganesha to assist him in compiling the Mahabharata. However, Ganesha agreed on one condition. He stated that he would write the Mahabharata, only if Vyas narrates it without a single pause. To supersede this condition, Vyas put another condition and asked Ganesha to understand the verses, even before he had recited them. This is how the Mahabharata was written. Ved Vyas narrated the Upanishads and the 18 Puranas continuously to Lord Ganesha. He has been fondly mentioned in the Jataka tales too.

He fathered four famous sons, Pandu, Dhritarashtra, Vidur and Sukhdev. He received knowledge from great sages like Vasudev and Sanakadik. He described that the most important goal in one's life is to attain Narayana or the Divine Supreme.

He compiled the Rigveda, Samaveda, Yajurveda and Atharvaveda. He was the first and greatest acharya of Sanatan Dharma. He is considered as a semi-incarnation of Lord Vishnu. It is believed that he reincarnated on earth in the Dwaparyuga to spread knowledge. Before his existence, Vedic knowledge only existed in the form of spoken words. He is referred to as Ved Vyas, because he had split the original version of Vedas into four parts. Ved Vyas literally means 'the splitter of Vedas'. According to Mahabharat, Vyasa's mother, Satyavati, was married to the king of Hastinapur. Shantanu bore two children, Chitrangada and Vichitravirya. After Shantanu's death, she and her sons ruled the kingdom with the help of Bhishma. Although both her sons died childless, she arranged for her eldest son, Vyasa, to father the children of the two widows of Vichitravirya.

Kripacharya, is an important characters in the Mahabharata. He taught warfare to the young princes of Mahabharat. It describes Kripacharya as capable of managing 60,000 warriors single-handedly on the battlefield. He ravaged the foe’s army like a blazing fire. Though, the Kauravas resorted to immoral ways,Kripacharya impartially carried out his duty. Later, Krishna conferred immortality on Kripacharya. He demonstrated great virtues like truth, righteousness and impartiality. Even under extreme situations, Kripacharya would never compromise on his values, and would stand out as the noblest among men. 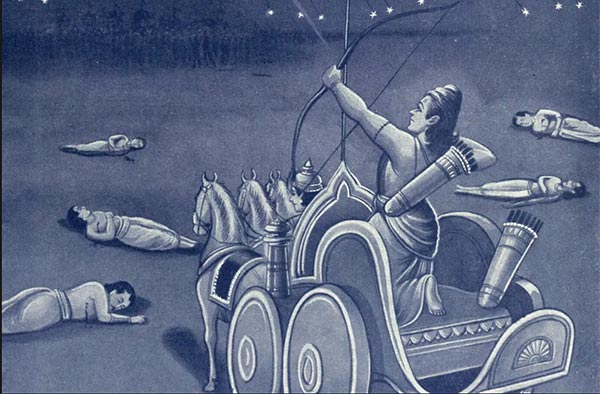 Ashwatthama is considered as an avatar of one of the eleven Rudras. Along with his maternal uncle Kripa,Ashwatthama was a survivor of the Kurukshetra war. He was the son of Dronacharya and Kripi. Drona practicedsevere penance to appease Lord Shiva, since he wanted a son, who possesses the same valiance as Lord Shiva.He was blessed with a gem on his forehead. The night after Duryodhana’s defeat, a very disturbed and restless. Ashwatthama, had planned an attack on the Pandavas. Once he arrived at the Pandava camp, along with his army, they found a Bhairava blocking their entry. Ashwatthama strangled Dhrishtadyumna, the commander of the Pandava army, and the killer of his father Drona.

There are different versions of the story. In one version, Ashwatthama mistakes the sleepingUpapandavas for the Pandavas and kills them. In another version, he is known to have killed the Upapandavas, sincehe could not trace the Pandavas. The Pandavas and Krishna returned the next morning, to search for Ashwathama,who seeks refuge in Vyasa’s ashram. Ashwatthama invoked the deadly Brahmaastra, only to face anotherBrahmaastra from Arjuna. Ashwatthama asked the warriors to revoke the astras. Ashwatthama decided that if he could not kill the Pandavas, he would end their lineage, aiming the weapon at Uttara’s womb. Krishna revived the still born baby.Later, the infant was named ‘Parikshit’, which means the one who has been tested. Krishna asked Aswathhama, to surrender the gem on his forehead. He was cursed that the wound caused by removing the gem, on his forehead would not heal, and his body would suffer from a host of incurable diseases for over 3000 years.

‘Ayush’ is derived from the Sanskrit word ‘Ayu’ which means life. The Ayush Homam is significant to invoke blessings, prosperity, longevity and success in career and relationships. It facilitates good health and keeps diseases at bay. It is usually conducted on birthdays and upon birth of a child, after analysing the birth chart. It nullifies the effects of negative karma from previous births. It is possible to control untimely and sudden death, with the help of Ayush Homam.

Where are the Chiranjeevi’s now in Kalyuga? 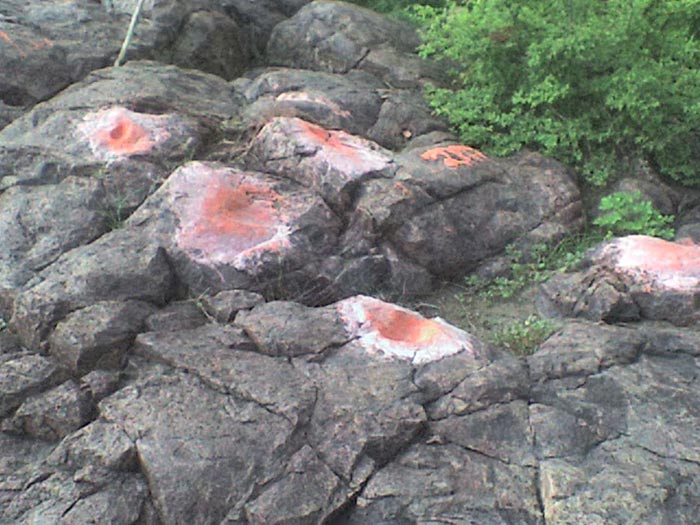 Bali: According to Bhagvatam, Bali is presently in Paatal Lok. It is believed that he would be Indra in next Manvantar.

Parshuram- It is believed that he resides on the Mahendra Parvat near Vaishno Devi temple. He is summoned by Parshuram, in case of any complicated matter of Jivatma karma. He is not visible through the naked eyes.

Ashwatthama – He was spotted in Bihar, Uttar Pradesh and Gujarat. He was spotted by a pujari at Kanpur. He was about 10 feet tall and blood was oozing from his forehead. He visits the temple for Jal Abhishek ,every day around 4.30 a.m.

Ved Vyas: He was born in the last of Tretayug, lived through Dwaparyug, and also had seen the initial phase of Kalyug. He is considered as the avtar of Vishnu. He is present in Haridwar, Vrindavan and Chitrakut.

Vibhishan- He was spotted by Goswami Tulsi Das, around 500 years ago. At present, he is in Lanka. As instructed by Lord Ram, he often visits Lord Jagannath temple at Puri, Odisha , to revere his isht dev, Lord Ram. He was blessed as a Chiranjeevi, to maintain morality and righteousness in Lanka.

Kripacharya - He was the Kul Guru during the Mahabharat war. His status as a Chiranjeevi is disputed due to his impartiality towards his disciples. He is usually spotted in the Himalayas.

Markandeya- Markandeya resides near the Yamunotri shrine in the Uttarkashi district of Uttarakhand. The earliest version of Markandeya Purana was composed by Markandeya near the Narmada river, in Western India .