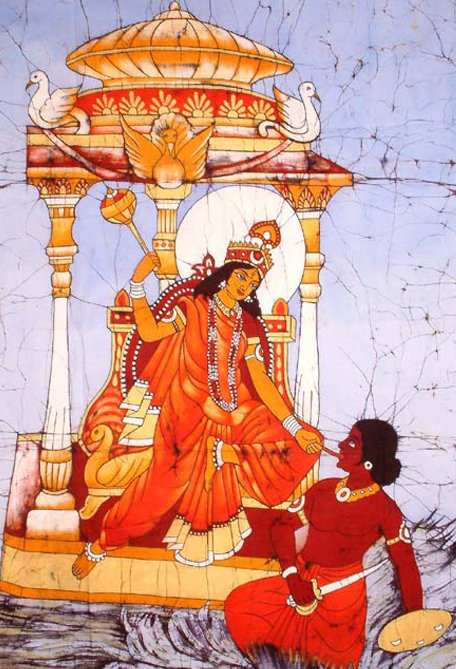 Bagulamukhi Mata also spelled as “Bagala” is one of the most powerful goddess who stands eighth amongst the Dus Mahavidyas. She is known as the wisdom goddess and can paralyze and control the enemies who try to harm Her devotees. Due to these powers, Maa Bagalamukhi is also referred to as goddess of Stambhana. The word “Bagala” is acquired from the word “Vagla” meaning bridle. The word “Vagla” then came to be called as “Bagala”.

Goddess Bagalamukhi is known by 108 names. In Northern part of India, Maa Bagalamukhi is often revered to as “Pitambari Maa”. Apart from this, She is also addressed as Brahmastra Roopini, Pitambaradevi and Shatrubuddhivinashini

According to the iconography as mentioned in the Tantrasara, Bagulamukhi mata is depicted sitting over a golden throne amidst the ocean in a beautiful altar. She has a yellowish complexion which looks like gold, draped in yellow saree and golden ornaments; She is seen adorning a garland of yellow flowers.

Portrayed pulling the tongue of a demon with Her left hand while raising a club to strike the demon with Her right hand, Maa Bagalamukhi is associated with Yellow colour and this colour plays a pivotal role while worshipping Her.

According to another description, Mata Bagalamukhi is portrayed having the third eye and four arms with a yellow crescent moon on her forehead. Her iconography commonly depicts Her with a human head but sometimes Goddess Bagalamukhi is shown having a crane head.

Goddess Bagalamukhi story is very interesting and there are many legends of How She appeared. According to one of the Legends, long time ago in Satya Yug a raging storm came on Earth. The storm was so powerful that it destroyed everything that came in its way. Mother Earth and all the living species on the planet were endangered. Observing that the condition was becoming worst, Lord Vishnu started performing austerities on the Haridra Sarovar shore to Goddess Tripura Sundari to take charge of the situation and to stop the storm from further destruction. Pleased by the austerities of Lord Vishnu, the Goddess emerged from the lake of turmeric in the form of Goddess Bagalamukhi. She calmed the gushing storm and thus saved Mother Earth from destruction and restored the order of the universe.

There is another legend which states that, there was a demon named Madan, He had acquired the boon of Vak- siddhi according to which anything he said came true. Madan misused this boon and troubled humans and also killed them. Terrified by the demon all the Gods ran to Goddess Bagalamukhi to seek help. The Goddess grabbed the tongue of demon Madan and immobilised it and raised Her left hand to slay Him with a club. 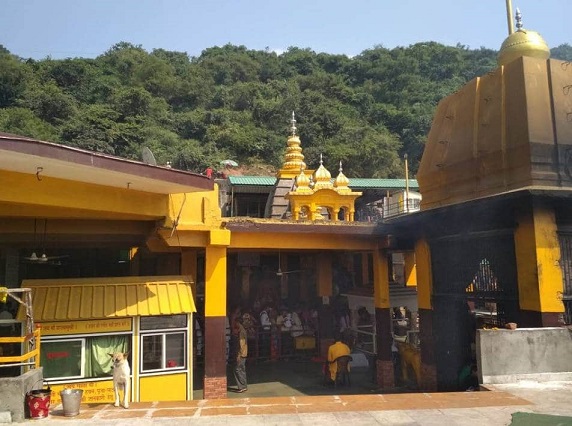 The Kamakhya Temple situated in Guwahati is known to have temples of all the Mahavidyas. On a distance of few meters there is a temple dedicated to Goddess Bagalamukhi. Other temples of Bagulamukhi Mata are found at Pathankot Mandi highway NH20, at Kotla and Bankhandi Himachal Pradesh in the north. The temples of Goddess Bagalamukhi are also built at badowan, a village near Mahilapur district atHoshiarpur Punjab. Also, at Nalkheda at Agar Malwa district in Madhya Pradesh, the temples of Bagulamukhi Mata are found. Thus, the most famous temples of Bagala Mata are situated at Kamakhya Temple, Assam, Guwahati, Kangra and Himachal Pradesh.

Reciting the Maa Bagalamukhi Moola Mantra is said to offer a range of benefits and it creates a protective shield around the devotees. Chanting the Baglamukhi Mata Mantra offers victory over enemies, helps to resolve problems related to finance (loss in business, debts, no increment). It helps the ones who are preparing for competitive exams and protects from evil and evil eye. If a devotee chants or meditates on Maa Baglamukhi Mantra with devotion then the fear of enemies is removed, one gets confident and faces challenges instead or running from it.

How to worship Baglamukhi Mata 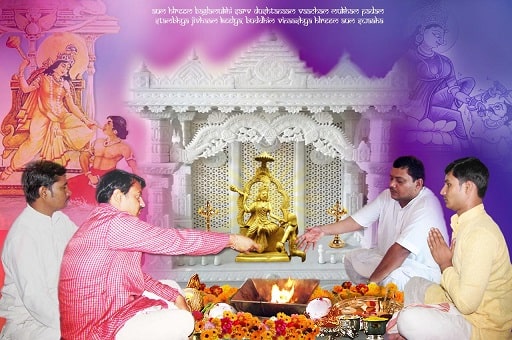 The best way to worship Bagulamukhi Mata is by chanting the Baglamukhi mantras early in the morning. Follow the steps given below to appease and worship Goddess Bagalamukhi.