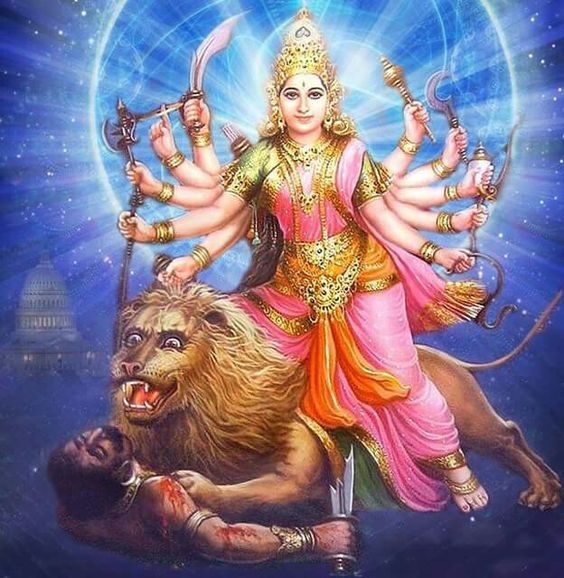 There would not be any Vedic scripture that does not mention glories of Durga sung by sages, saints, and devotees. She has been mentioned at many places in most Vedic scriptures and She has been immensely praised in the Devi Mahatmya or Saptashati. In the Bhagavata Purana and Devi Bhagavad Purana as well as in the Shaktism scriptures, She has been described as the Energy of the Supreme Lord. She epitomizes purity, knowledge, truth, and self-realization.

The word ‘Durga’ is derived from the Sanskrit word ‘Durg’ meaning a fort or a protective fortress. Also, the Sanskrit root ‘Dur’ means ‘prison’ and ‘Ga’ means ‘go or approach’. She is in charge of the material universe. She sends the arrogant miscreants to the prison (a material planet like the earth which is full of miseries). ‘Durga’ is also known as ‘Durgatinashini’ meaning "the one who eliminates sufferings." Goddess Durga protects the human race from ego, hatred, prejudice, selfishness, jealousy, etc. She is the very essence of creation, preservation, and annihilation. In Shaktism, it is believed that Durga was born from the collective energies of the Trinity of Brahma, Vishnu, and Shiva to slay the demon Mahisasura who was a great nuisance to the Gods and other living beings. Durga Saptashati is one of the ancient Vedic scriptures that describe Devi as the supreme power and the Creative Energy of the Supreme Absolute. Durga Saptashati is also known as Devi Mahatmya (Mahatmayam) being a section of the Markandeya Purana. It is one of the most important Vedic texts of Shaktism (goddess) tradition within Hinduism.

It describes the legends regarding the fierce battle between good and evil where Devi manifests as Durga to lead the forces of good against the demonic King Mahishasura. The Goddess or the Creative Energy manifests Herself as Lakshmi, empowering wealth creation and happiness. It also sheds light on the philosophical foundation wherein the ultimate reality is female energy. Devi Mahatmya’s text stressed the female is the elemental creator; she is also the Tridevi as the tributary creator, the sustainer, and the destroyer. She is presented through a language of praise as the one who resides in all creatures. She is the realization of all living beings, she is intelligent, she is a matter, and she is all that is form or emotion.

Durga Saptashati recommends the performance of Chandi Homa that aims to attain health and drive away from the fear of enemies. The Brahmin or priest chants verses from Durga Saptashati while performing Chandi Homa, offering seven hundred Ahuti (oblations) into the sacred fire to invoke Durga Devi. The seven hundred verses (‘Sapta’ means ‘seven’ and ‘shata’ means ‘hundred’) are organized into thirteen chapters. Reading Durga Saptashati is part of the Navratri celebrations in praise of Goddess Durga. The Saptashati text offers hymns to saguna form of the Goddess as well as the nirguna form of Hers. The saguna (divine) hymns appear in chapters 1, 4, and 11 of the Devi Mahatmya, while chapter 5 praises the nirguna (impersonal) concept of Goddess. The saguna forms are Mahakali (destroyer, Tamasic), Mahalakshmi (sustainer, Rajasic), and Mahasaraswati (creator, Sattvic). It also includes Saptashloki Durga, Devyakavacham, Argala Stotram, Kilak Stotra, Vidokt Ratri Sukt, Tantrokt Ratri Sukt, and Devi Atharvashirsh.

It consists of chapters 81-93 of the Mārkandeya Purana, being related by the sage Markandeya to Jaimini and his students in the form of birds. The thirteen chapters of Devi Māhātmya are split into three episodes. At the beginning of each episode, a different presiding goddess is invoked. The outlining narrative of Devi Mahatmya begins with an ejected king, a merchant betrayed by his family, and a sage whose teachings lead them both beyond material suffering. The sage teaches by relating three different epic battles between the Devi and various demonic. The greatest celebration is the legend of Mahishasura Mardini "Slayer of the Buffalo Demon". Among the significant goddess forms, the Devi Mahatmyam introduced into the Sanskritic mainstream are Kali and the Sapta-Matrika.

The process below is for everyone who is seeking the answer for how to do the Durga Saptashati Path:

The process below is for everyone who is seeking the answer for how to do the Durga Saptashati Path:

The Shat Chandi paath and Homa is an exclusive and powerful ritual involving powerful Saptashati mantras. Sat Chandi Yagna and Homam are very unique, rare, and elaborate Yajna. Getting the Sat Chandi Yagna and Homam done is an act of great merit and brings immense blessings from the Divine Mother. It bestows immense energy. As a result, even the greatest hardships that may seem hopeless to an individual may be conquered and at the same time, immense blessings from the Divine Mother can be brought in. It frees from debts and prevents all kinds of misfortunes and agonies. The paath grants disciple success, authority, and power. The paath and yagna kill all the demons and evil forces coming into life. It enhances spirituality and awakens the slept energy and opens the path of salvation. The paath with samputit invokes powerful vibrations to destroy obstacles and conquer enemies Read more.