About Annapurna Devi: The Goddess of Food and Nourishment

» Informational Articles » God-Goddess » About Annapurna Devi: The Goddess of Food and Nourishment 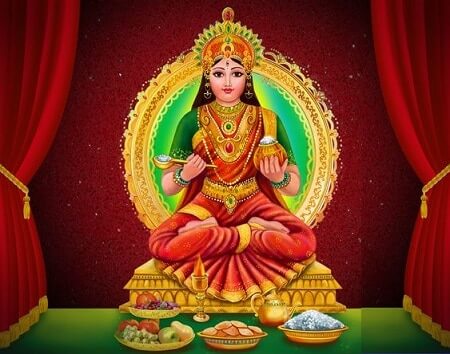 In Hinduism, a god (Deva) is equalized by a goddess (Devi), who is acknowledged as his Shakti, his feminine, divine strength. Indian goddesses are not considered to be less significant or in any way diminutive, as compared to their male counterparts. Hindu goddesses are viewed as brave, strong, powerful, protective, and sometimes even destructive, exhibiting a formidable level of fierceness that can shake the universe. Female deities are known to assume several forms ranging from docile and domesticated to fiery and wrathful.

Who is Goddess Annapurna & what is the meaning of her name? 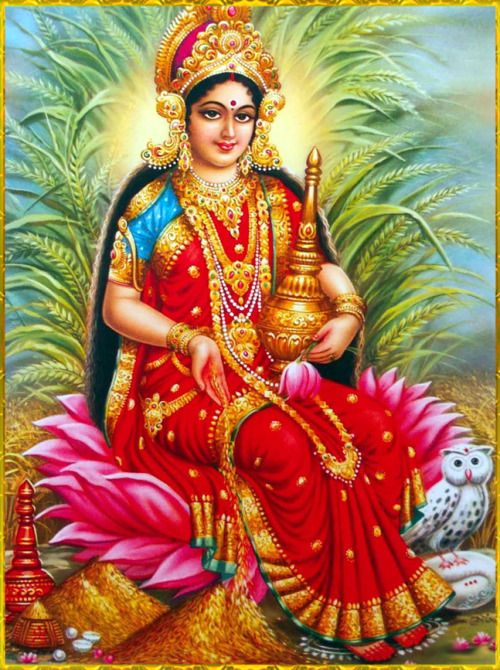 How often have we heard from our elders that we must not waste food as we are disrespecting the gods? The food we eat every day not only serves to satisfy our taste buds but also offers nourishment that ultimately leads to growth and development. In Hinduism, this food that we consume daily is associated with a goddess – Annapurna.

Annapurna Devi is believed to be the divinity of food and nourishment in Hindu Dharma. She is the goddess who delivers food for all living beings on earth. The name ‘Annapurna’ itself stands for ‘giver of sufficient food’ with ‘Anna’ signifying ‘food or grain’ and ‘Poorna’ meaning one who is complete, perfect, or whole. With the blessings of Annapurna Devi, we can consume food and survive in this world. She not only offers nutrition to the physical body but also the soul in terms of enlightenment and provides energy to achieve wisdom and knowledge. Goddess Annapurna is believed to be an avatar of Goddess Parvati, the spouse of Lord Shiva and is one of the many forms of Shakti.

The Annapurna Sahasranama is devoted to the Devi and sings praises of her one thousand names while the Annapurna Shatanama Stotram talks about her 108 names. Some of the names of Goddess Annapurna are Visalakshi, Visvasakti, Visvamata and Bhuvanesvari.

There are several temples devoted to her, one of the most famous being the Annapurna Devi Mandir in Varanasi with millions of devotees who come to this holy site to seek the blessings of the divine goddess. Since the Akshaya Tritya festival is believed to be the day Goddess Annapurna was born, the day is considered very auspicious and favorable for purchasing gold jewelry or beginning new ventures. 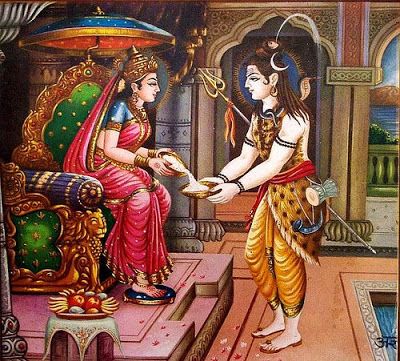 In the Annapurna Upanishad, which is believed to be a small-scale Upanishad among the 108 Upanishads, Goddess Annapurna is the main deity and has been depicted as a foundation of immense knowledge and wisdom. In this text, worshipping Annapurna Devi is the way through which Sage Ribhu was blessed with education.

Penned during the 3rd and 4th centuries CE, the Devi Bhagavata describes Goddess Annapurna as the Devi of Kanchipuram and Visalakshi as the deity of Varanasi. Written during the 7th century, the Skanda Purana mentions that Sage Vyasa was directed to Varanasi by a curse where Annapurna showed up as a housewife who gave him food. The Linga Purana states that Lord Shiva was begging for food for his kids as he was unable to get food in the universe owing to a miracle by his spouse Parvati. Then, Parvati materialized as Annapurna and presented food to Shiva at his doorstep. Composed by Adishankaracharya, the Annapurna Slokas are chanted by Hindus throughout the globe as an appreciation to Mata Annapurna for offering food. 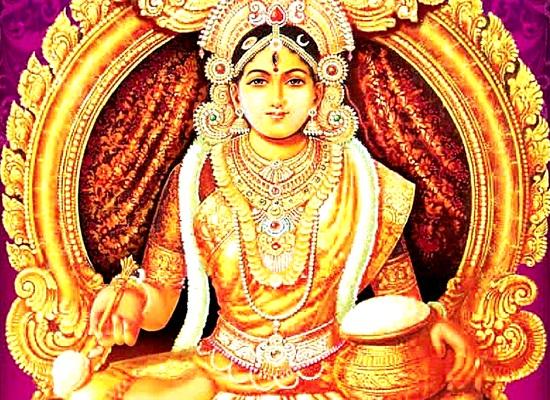 The iconography of Annapurna Devi is depicted as a gorgeous young woman with a fair complexion, bright round face like the full moon, three eyes, high breasts, and four hands. She is adorned with ornaments and holds a bedecked pot with tasty porridge in her lower left hand and is portrayed holding a golden ladle, decorated with shimmering jewels in the right. Symbolically, it is implied that her worshippers will never run out of food. Her other hands showcase the Abhaya - the protecting and Varada - the boon-giving poses. In a few places, she is depicted as sitting majestically on a regal golden throne with a crescent moon adorning her head with Lord Shiva standing adjacent to her with a begging vessel, pleading her for alms. You will often find several images of Goddess Annapurna decorating the walls of dining areas, restaurants, and traditional kitchens in India.

The goddess is also shown holding a scripture – Akshamala, and opener of doors of Moksha in her hands instead of a container and ladle. This demonstrates Annapurna Devi being spiritual as opposed to being about food. 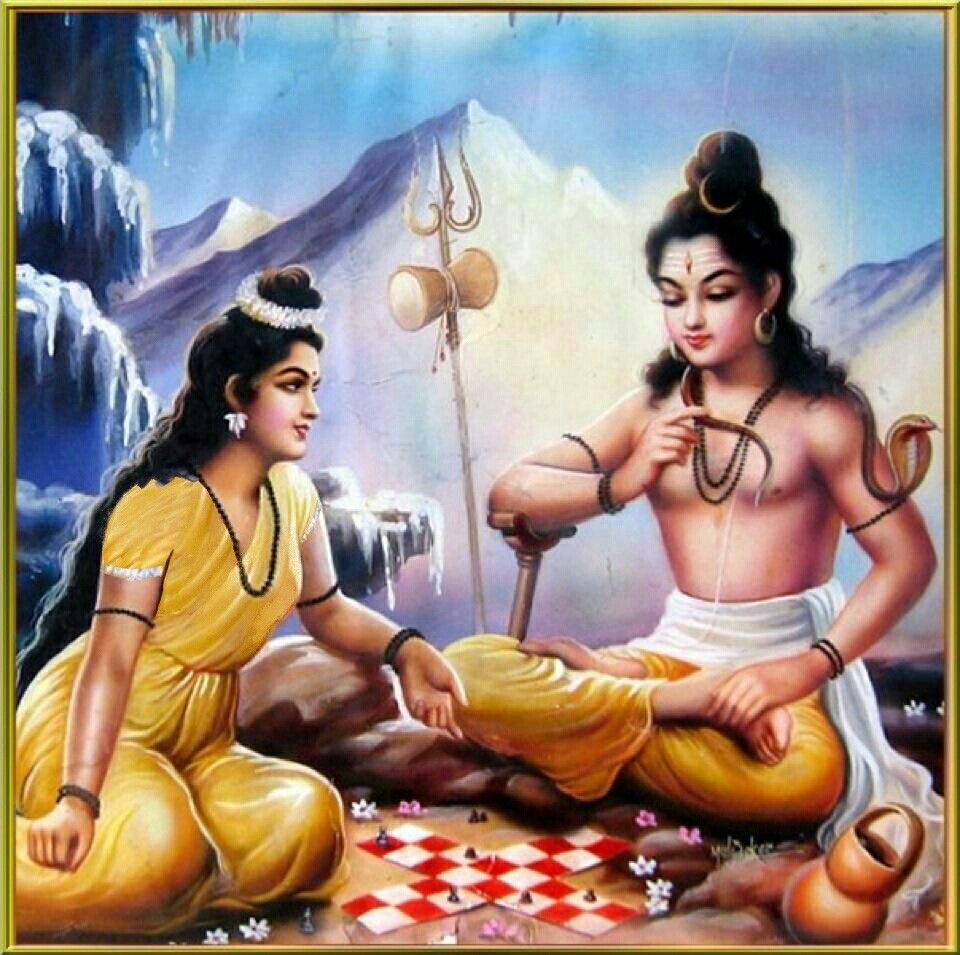 The popular game of dice used to be played by Lord Shiva and Goddess Parvati. Once they were playing an interesting game and decided to start betting. Shiva kept his trident and Parvati decided to bet on her jewels. As the game continued, Shiva lost the game and thus ended up losing his trident. In the subsequent game, he bet on his snake to win the trident back. But unfortunately, he did not win that game as well. He continued with more games and bet even more but did not win anything. Finally, he ended with nothing and lost everything including his begging vessel.

Humiliated, Lord Shiva headed out to Deodar Forest to seek Lord Vishnu’s advice. He told him the entire story of how he lost everything while betting. Vishnu then asked Shiva to play again and said that he will be victorious and win everything back in the next game. Pleased with Lord Vishnu’s counsel, Shiva returned to play the game again.

Lord Shiva started winning everything he had lost. Goddess Parvati became skeptical of Shiva’s unexpected turn of fortunes. She became upset and called him a cheat. This resulted in an argument and fight between the couple. Eventually, Lord Vishnu could not take it anymore and appeared in front of them. He informed them that the dice in the game had worked as per his desire and that they were only under the impression that they had been playing.

Wanting to demonstrate her importance to Lord Shiva as well as to the world, she vanished stating that she wished to witness how the universe would sustain itself without food. Goddess Parvati being gone meant that nature came to a halt. The seasons did not change, luscious land became infertile, everything turned barren, and nothing grew. This resulted in a massive dearth of food and severe drought.

Everyone from Gods to humans to demons was starving and praying for food. Parvati Devi heard their pleas and could not bear to see her children dying out of hunger and starvation. So, she emerged in Kashi (Varanasi) and began distributing food. Lord Shiva finally understood his blunder and the fact that he was not complete without Shakti. He materialized before Goddess Parvati and Kashi and had a begging contained in his hands. He stated that he recognized where he went wrong and realized that food is something that cannot be written off as an illusion. It was essential to nourish the physical body and inner soul.

Since that day, Parvati Devi has been revered as the Goddess of Food – Annapurna. It is assumed that if the food is cooked with holiness, it becomes pure as it is blessed by Goddess Annapurna.

She is exceptionally kind and compassionate. As per legend, it is believed that Goddess Annapurna does not even eat a morsel until all her worshippers have been nourished and fed in her shrine. It is said that those who pray to Annapurna Devi will not stay hungry. You will always find food in households that are devoted to Goddess Annapurna. The Hindu divine texts and scriptures also describe her as the source of knowledge, wisdom, spiritual energy, courage, and strength in body and mind.

Worshippers celebrate Annapurna Jayanti grandly with pomp and grace. In West Bengal, they conduct puja in their house to honor the Devi. The puja is performed by following all the rituals, reciting the mantras, and having flowers, various fruits and particularly food grains. It is believed that Annapurna Devi is an incarnation of Goddess Parvati. She can be revered with food grains, fresh fruits and rice for five days. Women are known to keep a fast for the entire day and they don’t break the fast and consume food until the puja is over. 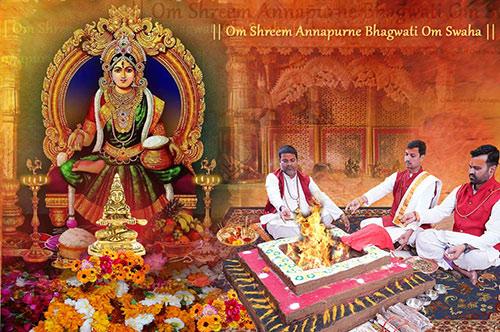 Worshippers perform the puja in their homes. Here are some of the rituals you can follow:

Most of the renowned shrines for Annapurna Devi are in Kashi, the place of her birth where she is enshrined adjacent to the Vishwanath temple. Apart from temples, she is revered at home as well, especially on the fourth day of the 9-day Navratri festival. Apart from that, special pujas are also performed in her honor during the waxing moon phase of the Chaitra month (March-April). 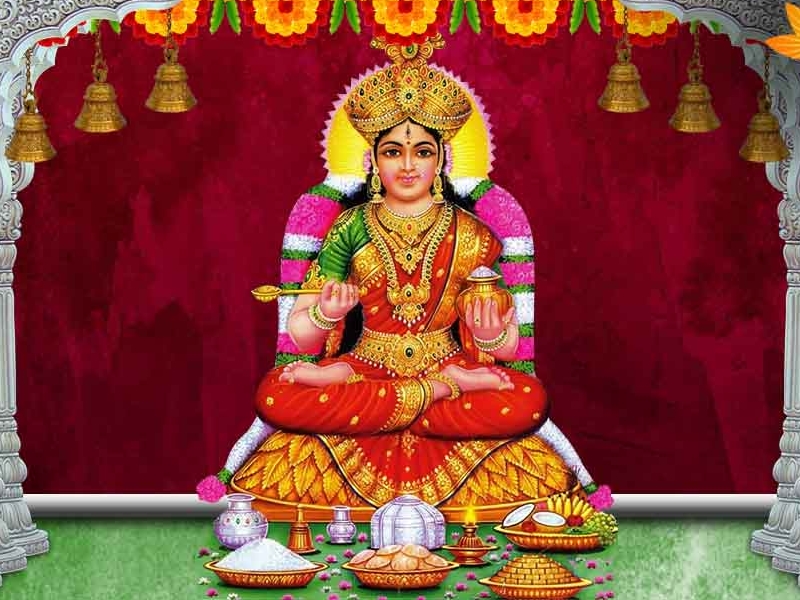 Annapurna Jayanti is an ancient Hindu festival that observes the significance of food. The auspicious day pays homage to Annapurna Devi who is considered to be the Goddess of nourishment and is an incarnation of Parvati Devi. Annapurna Jayanti is celebrated on the ‘Purnima’ of the ‘Margashirsha’ month. The worshippers pray to Goddess Annapurna with utmost sincerity, devotion and commitment. The puja rituals are predominantly performed by women. Thanks to the diversity of India, Annapurna Jayanti is marked with various traditions and customs across the country. The temples in Varanasi, Haridwar, Allahabad, Karnataka, Madhya Pradesh, and Odisha celebrate this festival with grand pomp and fanfare.

Akshaya Tritiya is believed to be the birthdate of Goddess Annapurna. The festival date changes every year as it is set as per the lunisolar of the Hindu calendar. According to the Gregorian calendar, it falls in April or May annually. This day is considered to be extremely auspicious and favorable for purchasing gold jewelry.

Praying to Annapurna Devi with a lot of sincerity will make sure that you never go hungry. You will never feel any dearth of food or other essentials in your homes. With her blessings, you will be bestowed with health, wealth, and prosperity. The deity not only fulfills the material requirements of the devotees but also spiritual needs. Married women can pray for the long life of their husbands and wish for a happy married life.

She eliminates fear and offers welfare and protection. When we pray to Mother Annapurna, she blesses us with the attainment of renunciation and knowledge. The wisdom that this deity provides is the realization that ‘giving’ is what true spirituality is all about. She makes us learn that renunciation will let us stay in equanimity in all of the situations that life throws at us.

She stands for a being who is beyond Maya (illusion) and is believed to be the supreme goddess of the entire universe.