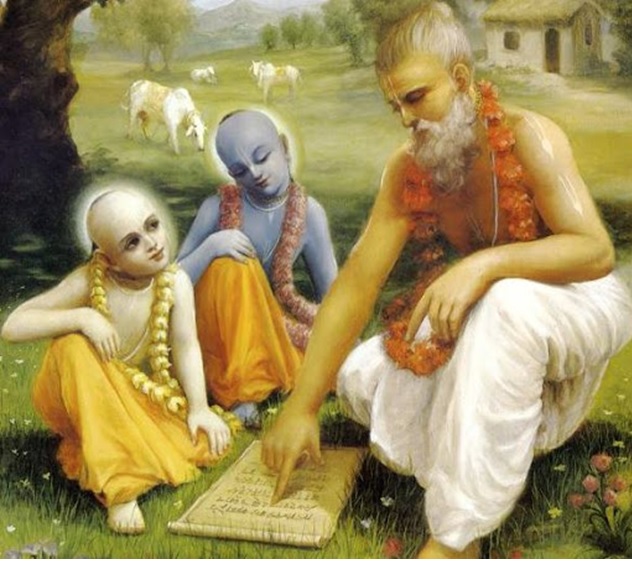 Guru Purnima (Wednesday, 13 July 2022) is observed on the Full Moon day during Ashadha month (June-July) as per the Hindu Lunar calendar. It is the day when one offers obeisance to their spiritual masters, teachers or Guru. 'Guru' in Sanskrit is translated as the dispeller of darkness and refers to spiritual guide who enlightens his disciples through his knowledge and teachings. The day of Guru Purnima is also beneficial to carry out yogic sadhana and meditation. 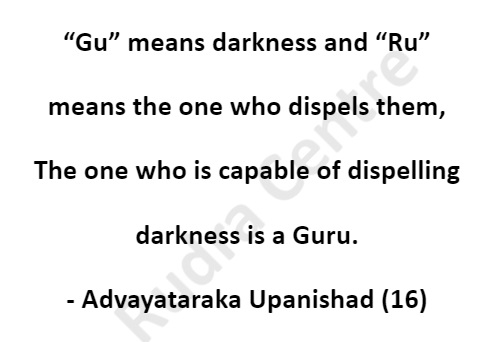 This day is also known as Vyasa Purnima and commemorated as the birth anniversary of Veda Vyasa, the author and a character in the Vedic magnum opus Mahabharata. Some of the notable Gurus in Hinduism are Sri Madhvacharya, Adi Shankara and Sri Ramanuja Acharya. Buddhists also celebrate Guru Purnima in the honor of Gautama Buddha. It is said that Buddha gave his first sermon at Sarnath in Uttar Pradesh on this day.

Your real Guru is truly within. He is the One who dispels all fear and ignorance. As Ramakrishna Paramahamsa says, He alone is the true teacher who is illumined by the light of true knowledge.

Your Guru helps you connect to the Guru within. He resides in your Vishudha Chakra located on the throat and awakens when you surrender to your higher self.

Auspicious Pujas To Be Performed On Guru Purnima 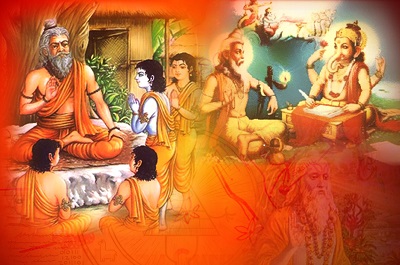 Guru Purnima is celebrated to mark the birthday anniversary of Vyasa Muni’s birthday. It is the day when people honour their spiritual masters, teachers, seniors and elders. The celebration venerates the Gurus or teachers. Guru Purnima Puja & Yajna on the occasion of Guru Purnima is performed to seek the divine blessings of gurus who remove darkness of ignorance and light up the Path of life.

Benefit of this puja: 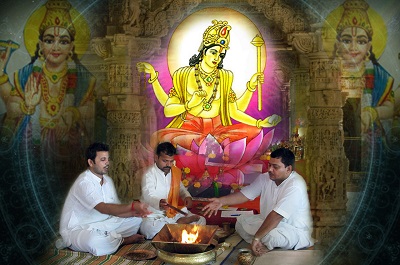 Guru Graha (Planet Jupiter) performed on Guru Purnima is highly auspicious and rewarding. The planet Jupiter is associated with confidence and communication, knowledge, wisdom and learning. Individuals with strong Jupiter tend to be well-educated and well-to-do individuals. People with stronger Jupiter are generally thinkers, temples priests, teachers, scientists and judges having morality, self-confidence, honor, and the law. Jupiter is a planet of broader purpose, reach, and possibility. 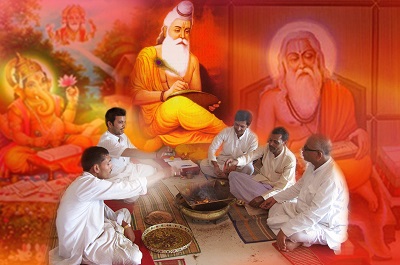 Maharshi Vyasa Muni or Ved Vyasa is an empowered complier of the four Vedas, the Puranas, the Mahabharata and the Bhagavad Purana (Srimad Bhagavatam). Born in the Dwapara Yuga to Rishi Parasara and Matsyagandhi, Vyas Muni is considered as the first and greatest acharya of Sanatan Dharma. Devotees of Ved Vyasa regard him as an incarnation of Lord Vishnu. Every year Guru Purnima is celebrated on the birthday of Maharshi Vyasa. 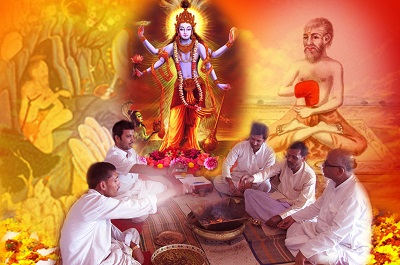 Maharishi Kapila is an incarnation of Supreme Lord Vishnu who restored the spiritual balance in the world through His teachings. Maharishi Kapila is the founder of the Samkhaya School of philosophy, which is one of the six orthodox (astika) schools of the Vedic philosophy. He also enlightened the world with Bhakti Yog an art of liberation through devotion and love for the Divine. It is because of Maharishi Kapila, Goddess Ganga descended onto the earth. He turned the sixty thousands sons of King Sagar to ashes. When King Anshuman, the grandson of King Sagar, begged Maharishi Kapila to redeem the souls of those sons, He saud that only if the Ganges descended from heaven and touched the ashes of the those sons, would they be redeemed.

Yellow Sapphire (Pukhraj) brings the wisdom of prosperity, not only by attracting wealth and financial abundance into one's life, but in its ability to manifest one's creative energy into form through action. It Is ruled by the planet Jupiter (Guru) that is, astrologically, the most benefic planets of all. Once worn correctly on the body, it re-energizes the emotional system, encourages self-expressions with more confidence and helps you eliminate the fear of the unknown and procrastination of important tasks. In the science of Chakras, it is said that Yellow Sapphire heals Vishuddha Chakra (Throat Chakra) located at the neck near the spine which in turn enhances your communication ability, decision making and self-expression. 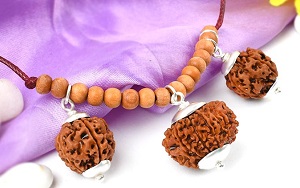 For: Enhancing Communication skills, Knowledge and Self Confidence.

Makes wearer bold, expressive, communicative and intelligent. This is the most powerful combination for knowledge and communication. Wearer gets powerful and melodious speech and he expands in awareness and understanding. Wearer releases timid/shy/suppressed nature and enhances his own uniqueness, creativity and self worth.

Vedas always mention that the Brahmins and spiritual masters must be respected and given charity as a token of appreciation. This is the highest form of charity. On this day you can also gift Rudraksha Kanthas of Gauri Shankar beads. A Gauri Shankar bead is the divine combination of Shiva and Shakti. Wearing this bead awakens the wearer's kundalini Shakti. 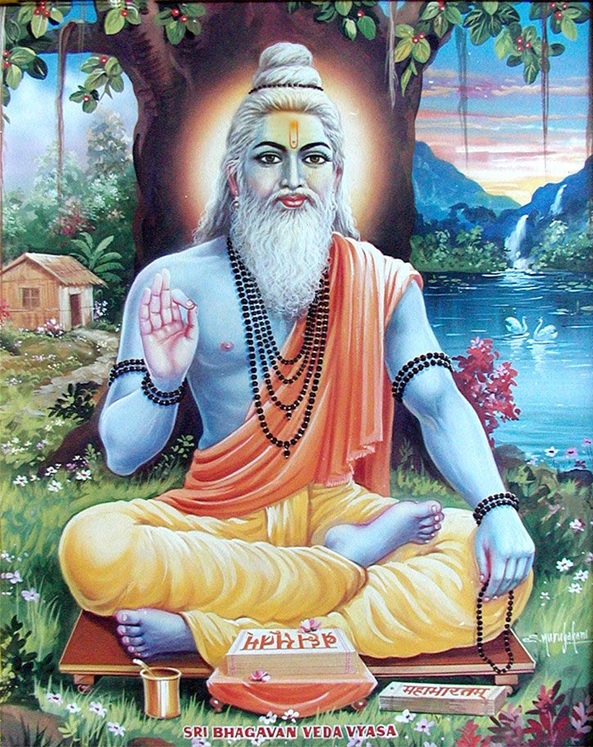 Vyasa / Veda Vyasa Muni, the compiler of Mahabharata, was born to Sage Parashara, the author of the Vishnu Purana (the first Purana) and Satyavati, on an island called Kalpi of the Yamuna River, as mentioned in the Vishnu Purana. It is said that Lord Vishnu wanted the knowledge of the Vedas to be transformed into script form, as till then this vast knowledge was available only in the oral form. So Veda Vyasa is said to be an extension of Lord Vishnu, who was born with the purpose of classifying the Vedas and to work on other ancient Hindu texts.

It is said that Veda Vyasa's mother Satyavati conceived Him and instantly gave birth to Vyasa. Veda Vyasa Muni was also called Dwaipayana, which means 'island-born' and because of His dark complexion Vyasa was also named Krishna. On growing up, Vyasa left home to tutor under and gain knowledge under Lord Brahma, Narad Muni and the four Kumaras. Veda Vyasa Muni is said to spend His life in the current Indian state of Uttarakhand on the banks of Ganga, where Sage Vashistha, had also stayed with the Pandava brothers.

Legend has it that Vyasa was a devotee of Lord Vishnu when he took birth as Sage Apantaratamas in a one of His past lives. The knowledge of the Upanishads, Vedas and the Dharmashahtras was inherent in Sage Apantaratamas, who was born as Veda Vyasa as per Lord Vishnu's desire. 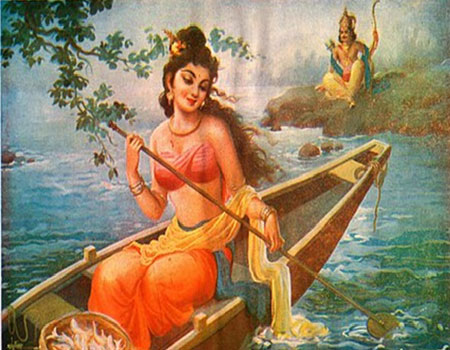 The story of the birth of Veda Vyasa is mentioned in the Mahabharata. Vyasa's mother Satyavati, a fisherwoman who once helped Sage Parashar cross the river by boating Him to the other side of the river, where He had to reach to perform a Yajna. As a gift of gratitude Sage Parashar offered a mantra to her which would grant her a son who would be a wise Sage and posses good qualities. Satyavati recited the mantra instantly and resulting in the birth of her child Vyasa. She however kept this a secret even from Shantanu,her husband.

Years later Satyavati and Shantanu were blessed with two sons, Chitrangada and Vichitravirya. Chitrangada lost his life in the battled field to the Gandharvas and Vichitravirya was constantly ill. Satyavati requested the patriarch, Bhisma to get suitable match for Vichitravirya, to be his queen. Bhisma attended the swayamvara held by the King of Kashi(now Varanasi), won the swayamvara and kidnapped princesses Amba, Ambika and Ambalika. Later, on coming to know that princess Amba was in love with the prince of Salva released her, but she came back to Bhisma after being rejected by the prince and asked Bhisma to marry her. Bhisma had taken a vow to not marry so He had to refuse her. Hurt and pained Amba vowed to kill Bhisma.

Vichitravirya suddenly died during his marriage ceremony to the princesses Ambika and Ambalika. To save the dynasty from being wiped out, Satyavati asked Bhisma to marry the princesses, which was again refused by Bhisma due to His vow to His father.

Satyavati later shared with Bhisma her secret of the child and Vyasa and requested Bhisma to bring Vyasa to Hastinapur. Vyasa was brought to Hastinapur. Because of Vyasa's divine spiritual glow princess Ambika got intimidated and closed her eyes, with the outcome of a child being born who was blind, named Dhritarashtra of Mahabharata. On meeting Vyasa princess Ambalika turned pale with fear and gave birth to a pale child, Pandu, whose name means the pale one. To rectify this, Satyavati requested Veda Vyasa Muni to give Ambalika another healthy son. However, it is said that Ambalika chose to send to not go to Veda Vyasa and instead sent her maid servant, who gave birth to a healthy son. Besides these sons, Veda Vyasa had a son named Suka from His wife Pinjala. In Mahabharata, Suka is mentioned as a spiritual guide to the Puru princes, guiding them from time to time. 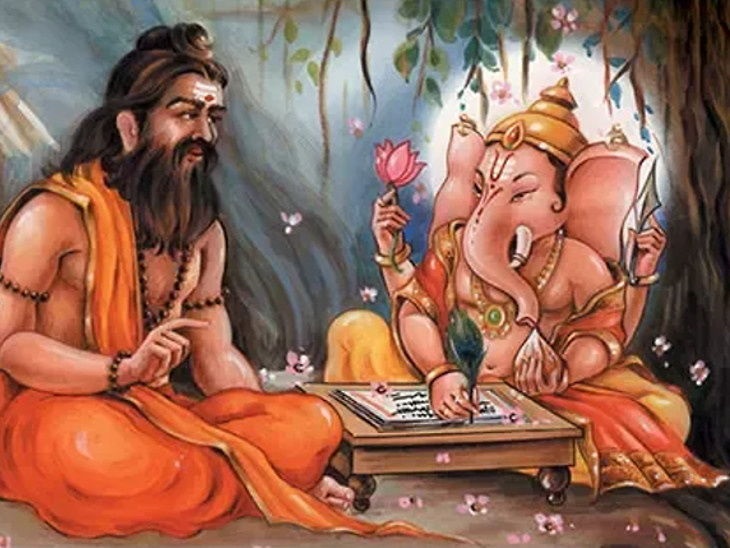 The great Sage Veda Vyasa is credited to be the author of a wide range of ancient Hindu texts, which are very important and hold significance.

The Mahabharata: This famous Indian epic is said to have been the chronologist of Mahabharata and Veda Vyasa Muni also features as a significant character in it. Veda Vyasa had requested Lord Ganesha to be the scribe of the epic while He narrates it. Lord Ganesha agreed to do so with a condition that the narration of Veda Vyasa would have to be without a pause. Vyasa accepted the condition and posed His condition that Lord Ganesha would have to understand the verses which would be narrated by Him before writing it down. Sitting beside the Beas River, Veda Vyasa Muni connected through meditative mode to channel the texts.

This partnership of Lord Ganesha, the transcriber and Veda Vyasa Muni's narrator, gifted us with the Mahabharata, 18 Puranas and the Upanishads.

The basic essence of Mahabharata comes through in 'Jaya' (meaning victory), which is a conversation between Dhritarashtra (the blind Kuru King and father of the Kauravas), and His charioteer and advisor, Sanjaya. Sanjaya had done a running commentary of all that was taking place in the battle field of Kurukshetra, describing war strategies adopted by the Kauravas and Pandavas, military formation and everything in detail to Dhritarashtra. It's a great narrative with Dhritarashtra asking intermittent questions to Sanjay, discussing situations in the war and getting emotional about the impending destruction and loss of kith and kin.

The sacred Bhagavad Gita comprises of the 18 chapter of Veda Vyasa's Jaya, which is a brilliant combination of war, religion, history, geography and morality.Puranas: Treasured Hindu texts credited to Veda Vyasa and considered to be an encyclopedia for ancient history and legends.

Brahma Sutras: These immortal texts written by Veda Vyasa Muni are about the Hindu philosophy, the Vedanta, which is advocated by Badarayana. However, Vaishnava Acharyas opine that Badarayana was none other than Veda Vyasa himself as His ashram was located in the Badari kshetram. This is contradicted by others who think the name Badarayana was because the island on which Vyasa was born had a rich growth of Badara fruit (Ber or Indian Jujube). Historians of recent years say that Vyasa and Badarayana were different personalities. Whatever the contradictions, Veda Vyasa is credited with being the chronologist, author, classifier of ancient Hindu texts which have philosophical, historical, legendary, cultural contribution.