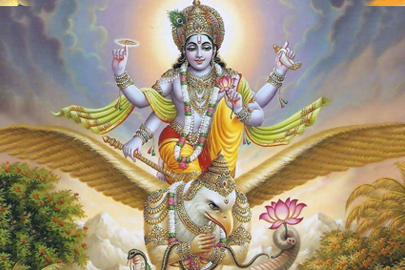 Ekadashi is a popular religious fast, revered and observed by Hindu devotees in honour of Lord Vishnu/ Hari/ Sri Krishna. The Hindu Lunar calendar is divided into two different cycles/phases of the Moon. Ekadashi is the 11th day in each of the Moon cycles, of Krishna Paksha or waning Moon phase and Shukla Paksha or waxing Moon phase, respectively.

Devotees keep fast for almost 24 hours on Ekadashis. The fasting rules have to be followed meticulously by the devotees. Observing dry fast, i.e. without drinking water or food throughout the fasting duration is considered the best way to fast on Ekadashis. However, devotees may also choose a fruit-based diet on the day. Bothe the Shukla Paksha Ekadashi and the Krishna Paksha Ekadashi are equally important. It is a day to be immersed in prayers and praise of Lord Vishnu and garner His blessings.

On the 11th day of the waxing Moon phase or Shukla Paksha/ Gaura Paksha of the Hindu month of Magha which is in January- February by the Gregorian calendar, the Jaya Ekadasi or Bhishma Ekadasi is observed. The name Bhishma Ekadasi is named after the character of the epic Mahabharata called Bhishma, who is famous for having vowed to lead His life in celibacy. Bhishma had been granted a boon by which He could select His own time of death. It is said that Bhishma chose the day of Jaya Ekadasi to leave His mortal body and so Jaya Ekadasi is also given the name of Bhishma Ekadasi.

Those who observe the fast must break it after sunrise the next day of Ekadashi. It is to be noted that one should break the fast (Parana) within Dwadashi Tithi. Dwadashi ends at 6:05 PM on 24th February. Another important consideration is that one must not break the fast during Hari Vasara which is the fourth duration of Dwadashi. The best time to break the fast is morning.
Book Now Ekadashi Puja

Like other Ekadasis observing a complete fast on Jaya Ekadasi or Bhishma Ekadasi is blessed with the merits which the fasting in any Ekadasi day blesses with and has special unique merit to be earned too. As mentioned in the Bhavishya - Uttara Purana, anyone who is observing a complete fast on the Jaya Ekadasi will be relieved from being harmed, influenced, possessed by evil spirits, ghosts or goblins.

On Jaya Ekadashi / Bhishma Ekadasi, observing fast is the most important thing. In the ancient Hindu text, the Bhavisya Uttara Purana, the importance of fasting on this Ekadashi has been mentioned clearly. The ancient text has Lord Krishna explaining to Yudhisthira about the importance where the Lord has said it is greater than all sacrifices or charity to the needy or the sacrifice of Horses (Ashvamedha) or even seeing Lord Vishnu Himself. It is said that one who observes fast on this day, adhering to the rules, will be liberated and get a place in Lord Vishnu's abode.

Yudhishtira ( the eldest of Pandava brothers of Mahabharata), asks Lord Sri Krishna about the importance and story of Jaya Ekadasi or Bhishma Ekadasi. The Lord lovingly narrated the story which is an interesting story of Malyavan and Pushpadanta.In Lord Indra's celestial kingdom where all Demi-Gods lived happily and contentedly, Indra used to enjoy drinking the ambrosia (a drink of Gods ), in the Nandana Forest with exotic blossoms. On one such occasion when Lord Indra was being served by singing and dancing of fifty million Apsaras (heavenly maidens), one of the Apsaras named got mesmerised by the handsome and young Malyavan. Malyavan was the son of Chitrasena, who was Indra’s chief musician.

Malyavan too was attracted to Pushpadanta and enchanted by her beauty. So engrossed were the two with each other that the feeling of lust overpowered them. They had come to entertain Lord Indra by singing and dancing but they got lost in each other so much that it resulted in Malyavan forgetting the lyrics of what he was singing and Apsara Pushpadanta dancing out of rhythm. Lord Indra noticed this and understood what was going on, that both Malyavan and Pushpadanta were hit by Cupid's arrow. Indra felt insulted and angered with their behaviour, so much so, that He cursed the two of them to live the life of 'Pisachas' (hobgoblins) and would live as husband and wife in that state on earth.

As soon as Lord Indra's curse was said, Malyavan and Pushpadanta found themselves descending from the Heavenly Nandana forest to somewhere on the Himalayan range. They lost their celestial intelligence and wisdom and were left bereft of the sense of smell, touch and taste. Both of them felt miserable in the snow and cold of the Himalayas and roamed from one place to the other suffering from the extremely cold temperature and even though they took shelter in caves, the snowfall affected them badly. In a dismal condition, chattering teeth and shivering bodies Malyavan and Pushpadanta wondered what heinous sins they had committed that they were in this severely cold environment, in the Pishacha body? They realized that sinning could only lead to hellish punishments, such as which they were subjected to currently. However, the two lovers wandered around in the snow, without any food to eat nor did they drink any water.

However, luck was on the side of Malyavan and Pushpadanta as that day happened to be the auspicious Jaya Ekadasi. A day favoured by Lord Vishnu and anyone who keeps a complete fast on Ekadasi earns a place in the Lord's abode, near His Lotus feet. The love-struck couple in Pisacha form, by the harsh curse of Lord Indra, spent a sleepless night beneath a Peepal tree, numb with cold and when it became unbearable, they lay embracing each other just for the warmth of the body of each other in the frigid condition.

The next morning (Dwidasi) saw a miracle unfold. Malyavan and Pushpadanta found that they were no more in their Pisacha form. Gone were their ugly demonic body, they were back to their original beautiful forms in rich clothing and gorgeous ornaments. This miracle was the result of Malyavan and Pushpadanta having observed the complete fast of Jaya Ekadasi, without realizing it. Not only fast, but they had also stayed awake that night because of the severe cold condition. The merit of observing the Jaya Ekadasi fast absolved their sins and they automatically were restored to their original forms.

Malyavan and Pushpadanta soon reached the capital of Lord Indra's kingdom, Amravati. Lord Indra was surprised to see the couple who He had cursed back in their celestial form, standing in front of Him. Lord Indra asked them how they were released of the curse so soon and who released them from being Pusachas? After the couple paid their respect to Lord Indra, Malyavan explained that it was Lord Sri Krishna's blessings along with the merits of observing Jaya Ekadasi fast unknowingly, that has resulted in the miraculous outcome for them. Lord Indra told them that anyone who has been in service of Lord Sri Hari or Lord Shiva was worthy of being worshipped by all, including Him. So, once again Lord Indra welcomed the lovely couple, Malyavan and Pushpadanta and let them enjoy Lord Indra's kingdom.

This story once more goes to show the power of the Jaya Ekadasi or Bhishma Ekadasi, even if it is observed unknowingly.

1) One day before Jaya Ekadashi, which is the 10th day of the Krishna Paksha, the person should clean his/her teeth thoroughly in the afternoon and have supper at Sunset hour.
2) On the morning of Utpanna Ekadashi, the person should intend on keeping the fast meticulously. The person should have a bath in a river (which is said to be most purifying) or a lake and in both not being available, bathe with pond water.
3) While bathing the person should smear mud on his/her body with chanting a prayer to Mother Earth.
The prayer - O Asvakrante! O Rathakrante! O Vishnukrante! O Vasundhare! O Mrttike! (O Mother Earth! please remove all my sins accumulated from past lives so that I may enter the abode of the Lord Vishnu the Supreme Lord)
4) Worship Lord Govinda with complete dedication and Offer an excellent 'Bhog' (food to Divine) along with flowers and other things of the offering.
5) Light a lamp at home in honour of the Lord
6) Chant or sing praises of Lord Vishnu throughout the day and remain in a most blissful state during the fast.
7) Stay awake through the night in full consciousness. If possible play musical instruments throughout the night to please the Lord.
8) The next morning the person should give charity to Brahmanas and respectfully ask them for forgiveness for any offence.
9) For people who keep a complete fast till the next day, one should say the prayer - "O Pundarikaksha, O lotus-eyed Lord, now I will eat. Please shelter me".
10) After the prayer the devotee should offer flowers and water at the lotus feet of Lord Vishnu and request the Lord to eat by chanting the mantra of eight-syllable, thrice. To garner the full merits of the fast, the devotee should have water which has been offered to the Lord.
11) Fire sacrifices can be performed if the devotee chooses to do so