Lord Hanuman - The God of Mental and Physical Strength 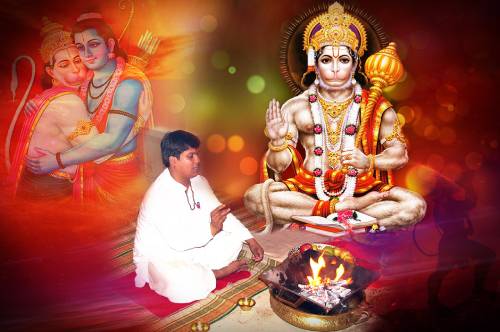 Hanuman, one of the most popular and revered Hindu deities, is also recognized as the Monkey-God. He was the most devoted follower of Lord Ram and helped the Lord in His war against the demon king of Lanka, Ravan who abducted Ram's wife Sita. Hanuman is the incarnation of Lord Shiva, and devotees worship Him for strength, devotion and protection against evil.

Legends say that the god of wind Pavana was reborn as Hanuman on Lord Brahma's command to aide Lord Ram in His fight against the evil Ravan, just like many gods and goddesses were reincarnated as Vaanaras (apes). Other than the Ramyana, Hanuman finds mention in Mahabharata, many Puranas and also some Jain texts.

The story of Hanuman's birth 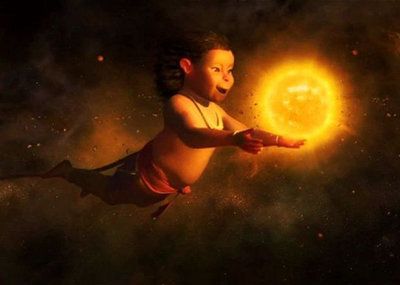 Lord Vrihaspati's attendant Punjikasthala was cursed to look like a female monkey and the curse could be reversed only if she bore Shiva's incarnation as her son. In her following birth, Punjikasthala was born as Anjani and along with her consort Kesari performed austerities for Shiva who gave her a boon that would revoke the curse. While she was meditating, Agni (god of fire) gave a bowl of sacred sweet to be distributed among Dashratha's wives so they may give birth to the divine offspring. An eagle flew away with a portion of the sweet and Pavana delivered it to the outstretched hands of Anajani who gave birth to Hanuman after consuming the sweet. Pavana gave his blessings to the baby and became Hanuman's godfather.

How Hanuman got His name

There are many theories about how Hanuman got His name. The name is apparently derived from Sanskrit words 'Hanu' (jaw) and man or mant (disfigured). The story goes that as a child Hanuman once pursued to eat the sun believing it to be a ripe mango. He then clashed with Rahu, who was also pursuing to eclipse the sun but Hanuman defeated Rahu and ate the sun. Rahu then approached Lord Indra for help to carry on with the eclipse as scheduled. An irate Indra struck Hanuman's jaw with Vajra (thunderbolt). When the thunderbolt struck Hanuman became unconscious. Pavan carried him to Patala (nether world) leaving all the living beings gasping for air. Lord Brahma had to appease Pavana by showering Hanuman with boons and blessings, making Him immortal, invincible and strong. 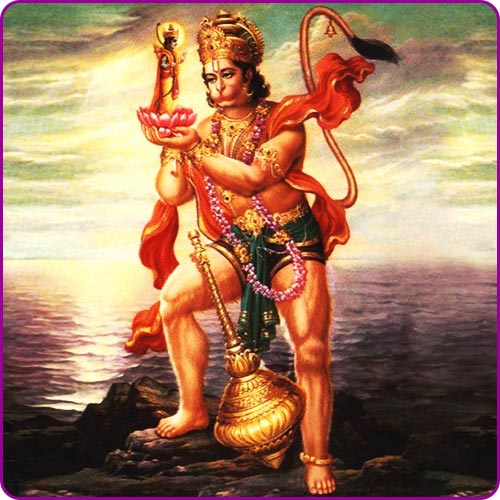 Hanuman was blessed by Brahma with several boons and blessings. Other than protection from the irrevocable Brahma's curse, He also has the power of instilling fear in His enemies, destroying fear in friends, changing His form as and when He wants and an ability to travel wherever He wishes. Hanuman has been blessed by permanence with a band that deems Him indestructible for life, ability to cross the ocean and superior knowledge of the scriptures by Shiva.

Indra made Him immune to the Vajra (thunderbolt) weapon and physically stronger than Vajra. Varun made Him safe from water and Agni gave Him immunity from fire. Hanuman can assume huge as well as small size with the two siddhis “ laghima and garima, respectively as blessed by Surya (Sun god). He was also blessed with immortality by Yama (the god of death) who spared Him from his weapon so that death wouldn't come to Him. His godfather Pavan made Him faster than Himself. Kuber gave Him the blessings to be happy and contented all His life. Vishwakarma gave Him protection from all objects and weapons and Kamdev made Him free from the effects of sex giving Him the name Bala Bramhachari.

As a child Hanuman was very naughty and would trouble the sages and saints. Finally, when they couldn't bear His mischief any more, they sought help from Lord Brahma who knew Hanuman was but just a child. So he gave a mild curse to Hanuman that He wouldn't remember His own powers and could use them only when someone reminded Him. For instance, Hanuman could remember and become big while helping Lord Ram in His war with Ravan only when Jambavat reminded Hanuman of this ability. 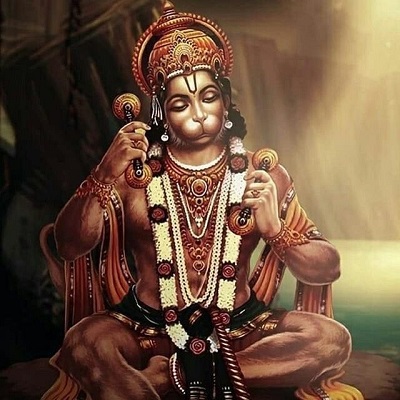 Hanuman's devotion to Lord Ram and contribution in His battle to get Lord Ram's abducted wife Sita back is unparalleled. There's a treasure trove of the annals of Hanuman's greatness “ right from fighting an elephant to flying over the sea and tricking Sursa by first becoming gigantic and then becoming small and entering through her ear and exiting through her mouth. Once He made it to Lanka to spy on Ravan to help Lord Ram, He bravely fought Ravan's son, demon Meghnath but was captured and brought to Ravan. Being the messenger of Lord Ram, Hanuman could not be killed so Ravan ordered his guards to tie a cloth to Hanuman's tail and set it on fire. But Hanuman made His tail longer and longer and there was no cloth left to cover it. The tail was still set on fire but Hanuman became small and escaped the demons and set Lanka on fire while escaping the palace.

Other than bravely fighting Lankini, the demon guard of Lanka, Hanuman's greatest deed was saving Lord Ram's brother Lakshman's life. To save the fatally wounded Lakshman, Hanuman flew all the way to the Dronagiri Mountain in the Himalayas to fetch the Sanjeevani herbs needed to heal Lakshman's wounds. Hanuman killed the demon Kalanemi and detained the Sun God from rising before His scheduled time because Lakshman would have perished if not treated by daybreak and Ravan summoned the Sun God to rise before His time. Unable to determine the right herb Sanjeevani, Hanuman carried the entire mountain, thus saving Lakshman's life.

Hanuman assumed the Panchmukha or five-faced Hanuman to defeat the guard of Patala Makar Dhwaja when Ram and Lakshman were imprisoned there by Ravan's brother Mahiravan. Makar Dhwaja was Hanuman's son who was created when a drop of Hanuman's sweat fell into the sea when he was extinguishing the fire set to his tail in Lanka.

On their return to Ayodhya after slaying Ravan, when Lord Ram held a ceremony to reward His well-wishers, Hanuman turned down the invaluable necklace given by Sita and showed that the god and goddess were in His Heart by tearing His chest open.

Tuesday and Saturday are the days when devotees worship Hanuman by giving Him special offerings. His hymn called Hanuman Chalisa is chanted to evade troubles and for attaining success.

We pray to the son of Goddess Anjani and the son of the Wind. Oh Lord Hanuman, lead us towards intelligence and knowledge.

Meaning:
" This Hanuman Mantra is a very secret mantra with unlimited power in it. This Hanuman mantra brings instant results. One becomes exceptionally powerful by chanting this hanuman mantra. "

Meaning:
" Recite this Hanuman Mantra 21000 times to eradicate diseases, evil spirits and other types of disturbances in life "

Meaning:
" Om, That great Purusha, I meditate on the greatest of the Devas, I Pray to Lord Rudra to illuminate my intellect. "

Meaning:
" Ekadanta refers to one tusk in the elephant face, which means God broke the duality and made you to have a one-pointed mind. Whoever has that oneness of mind and single-minded devotion will achieve everything. "

Meaning:
" We invoke you, O Ram’s messenger, destroyer of Lanka (One who burned down Lanka), born from the womb of Anjani and destroyer of Shakini and Dakini (evil spirits). "

Meaning:
" We pray to the son of Anjani and the one who is utmost powerful. May Lord Hanuman illuminate our intellect. "

Meaning:
" O Shri Hanuman, The son of Pavan, The One who is the Saviour, The embodiment ofauspiciousness, reside in my heart together with Shri Ram, Laxman and Sita. "