About Baba Khatu Shyam Ji: Who is He, His Story & History

» Informational Articles » God-Goddess » About Baba Khatu Shyam Ji: Who is He, His Story & History 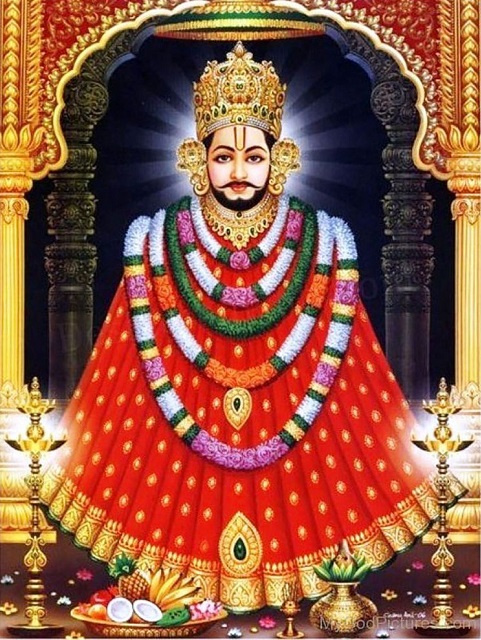 The numerous devas and devis are meant to be embodiments of various features of the same God. The concepts and descriptions for deity within the diverse traditions of Hindu Dharma change and comprise of Deva, Devi, Ishvara, Ishvari, Bhagavan and Bhagavati. In several ancient texts of Hinduism, the human body is labeled as a temple and deities are defined to be parts living within it, while the Brahman (Absolute Reality) is said to be the same or of a similar nature, which the Hindus consider to be eternal and living within every person. One such deity whose story deserves to be told and heard is Lord Khatushyamji.

Who is khatu shyam ji?

Lord Khatushyamji is a Hindu god who is venerated, especially in western India. He is also referred to as Barbarika. As per Hindu mythology, Khatushyamji is believed to be the avatar of the son of Ghatotkacha, Barbarika. It is assumed that worshippers who say his name from the bottom of their hearts are blessed with good fortune and have their troubles eliminated if they do it with sincere devoutness.

Khatushyamji is believed to be the Deva of the Kaliyuga. It is said that the Hindu deity has obtained a boon from Lord Krishna that he would be revered by Krishna’s own name (Shyam) and worshipped in that way. In Rajasthan, he is venerated as Khatushyamji and in Gujarat, he is renowned as Baliyadev who was believed to have been sacrificed before the Mahabharata battle to assure the victory of his grandfathers, the Pandavas. To honor his sacrifice, he was sanctified by a boon presented by Krishna. Among other names, he is also referred to as Barbarika. This Hindu deity is immensely revered in Rajasthan, especially in western India. 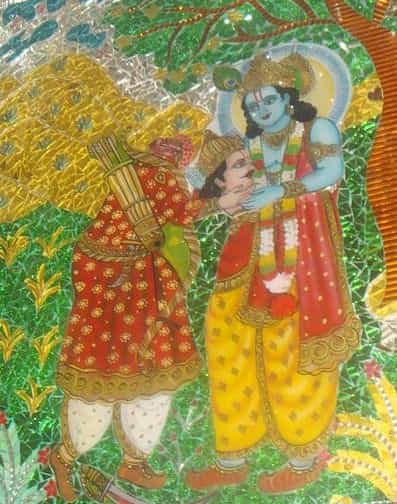 As per the mythology, Khatushyam in the Mahabharata is considered to be the strongest warrior in the epic, but unfortunately, there is no individual called Barbarika in the Mahabharata, as penned by Sage Vyasa. His tale is mentioned in the Skanda Purana, which is the root of all legends.

In the Skanda Purana, Barbarika (Khatushyamji) was the son of Ghatotkacha (Son of Bhim). There are a couple of other references that cite him as a warrior from the south. Khatushyamji was originally a yaksha who was reborn as a man. He was a man of principles who decided to favor the weaker side, a decision that could have destroyed both sides, leaving only Barbarika as the singular survivor. It is believed that to prevent the disastrous outcome, Lord Krishna requested Khatushyamji for his head, to which he willingly agreed. Shree Krishna was pleased with his devotion and thanks to the powerful sacrifice, bestowed him with a boon. As per the wish, Barbarika would be renowned with Krishna’s name (Shyam Ji) in the Kaliyug (present times) and would be venerated in his own form.

In Nepali culture, Kirata King Yalamber of Nepal is depicted as Barbarika while Native of Kathmandu showcases him as Akash Bhairav.

Birth
Lord Khatushyamji was the offspring of Ghatakocha (son of Bhima). He came into this world on the 11th day of the bright half of the Kartika month. As soon as he was born, he grew in size. Within a moment, he turned into a young man. Since he had hair like that of Barbara (a tribe in India) folks, Ghatakocha called him Barbarik. His father accompanied him to visit Lord Krishna to ask for more guidance. Shri Krishna recommended him to meditate on the Goddesses. He asked him to go to Gupta Kshetra and appease the four devis of the quarters there and the nine Durgas.

Fight with Bhima
Pandavas had headed out to the woods during their exile. As Barbarika had not seen them since their birth, he was not familiar with them. They were also not aware of who he was. They wished to quench their thirst. Thus, Bhima headed out to the pond and began washing his face, hand and feet prior to drinking the water. It angered Barbarik as he believed it was a crime to clean your body parts in a sacred pond.

A fight started amongst them. Even though Bhima did fight well, he soon got tired. Then Barbarik carried Bhima and took him toward the sea to push him into it. Lord Shiva materialized and informed him that Bhima was his grandfather. After hearing this, he was embarrassed by his actions and requested forgiveness from Bhima. He forgave him but Barbarik was so depressed that he made the decision to kill himself and hurled himself into the sea, but the goddesses saved his life. Then Lord Shiva informed him that it is not wrongdoing if it was committed out of ignorance.

Why did Lord Krishna Kill Barbarik?

Barbarik was a Yaksha in his previous birth. One day, he unintentionally belittled the gods. This enraged Lord Brahma who cursed him that he will die at the hands of Krishna before the battle commences. Barbarik requests Lord Vishnu to grant him a boon where his intellect fulfills all his tasks ever since their birth. He is bestowed with the boon that people will venerate him and will be worthy of being loved by goddesses. Barbarik desired to view the war. Goddess Chandika drizzled the head of Barbarik with nectar instantly, making it unageing and immortal. His head then traveled to the peak of the mountain while the rest of his body was cremated. 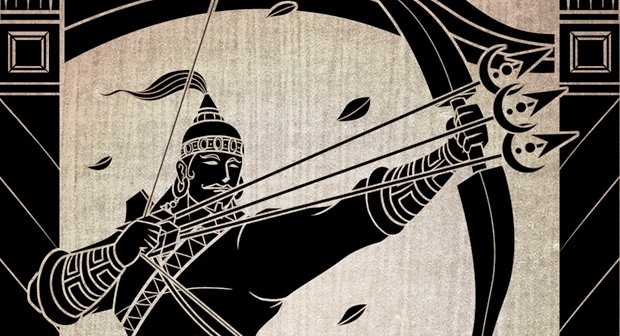 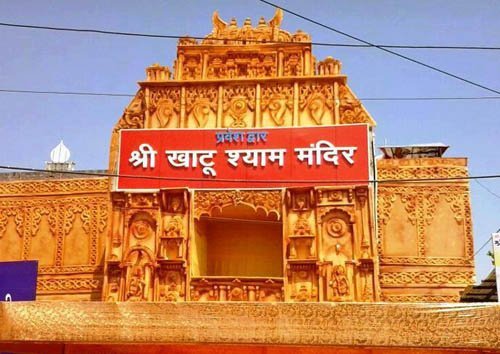 The Khatushyam Temple is a Hindu temple, located in the village of Khatushyamji, Rajasthan (Sikar district) in India that is extremely famous with the pilgrims. Worshippers believe that it has the miraculously rediscovered head of Barbarika or Khatushyam, a character from the Mahabharata epic.

Prior to the beginning of the Mahabharata war, Barbarika’s final desire was to witness the battle of Kurukshetra, so Lord Krishna himself had his head placed on the mountain peak for Barbarika to view the war. It is believed that the head of Lord Khatushyamji was presented to the river Rupawati by Lord Krishna.

The head was subsequently discovered buried at the Khatu village in the Sikar district of Rajasthan. One day, milk began flowing impulsively out of a cow’s udder when she came close to the burial spot. It was offered to a Brahmin who prayed and meditated on it to get the story revealed. The King of Khatu, Roopsingh Chauhan, had a dream where he felt motivated to construct a temple and set up the head there. Subsequently, a temple was constructed and the idol was fixed there on the 11th day of the Shukla Paksha (bright half) of the month of Phalgun.

A slightly different take on this legend is that Roopsingh Chauhan’s wife, Narmada Kanwar, once saw a dream in which the deity gave her instructions about getting his image out of the earth. The sacred site (now referred to as Shyam Kund) did yield the idol, which was duly protected in the temple.

The original temple was constructed in 1027 AD by Roopsingh Chauhan. In 1720 AD, a nobleman called Diwan Abhaisingh revamped the old shrine, on behalf of the then ruler of Marwar. The idol is created out of rare stone. Khatushyam is considered to be the family deity of several families. Another shrine is housed at Lambha in Ahmedabad, Gujrat, where devotees bring their newborn children to seek the blessings of Khatushyam. Here, he is referred to as Baliya Dev.

The temple is very rich architecturally. It is built out of the lime mortar, marble and tiles have been used in building the structure. The shutters of the sanctum sanctorum are gorgeously encompassed with gold sheets. The prayer hall, named Jagmohan, is enormous and its walls are painted featuring mythological scenes. The entrance gate and exit gate are created out of marble. Their brackets are also formed out of marble and showcase ornamental floral designs.

You will find an open space in front of the entrance gate of the shrine. The Shyam Bagicha is a garden adjacent to the temple from where flowers can be picked to be presented to the deity. The samadhi of Aloo Singh, an avid worshipper, is housed within the garden. The ‘Shyam Kund’ is a holy pond next to the temple from where the ‘Sheesh’ (head) of baba Shyam came out. In this kund, worshippers cleanse themselves by taking a bath and worshiping Khatu Naresh.

Purpose of the Puja

Khatushyamji helps in fulfilling all the desires of the devotees. The puja is performed to demonstrate adherence and gratitude towards the deity. A worshipper will never suffer financial losses or crises in business after performing the holy rituals of Khatu Shyam Puja. It is conducted to attain victory and financial development in life. Khatu Shyam Puja is also performed to bring harmony and joy to the house.

Who can worship Lord Khatushyamji? 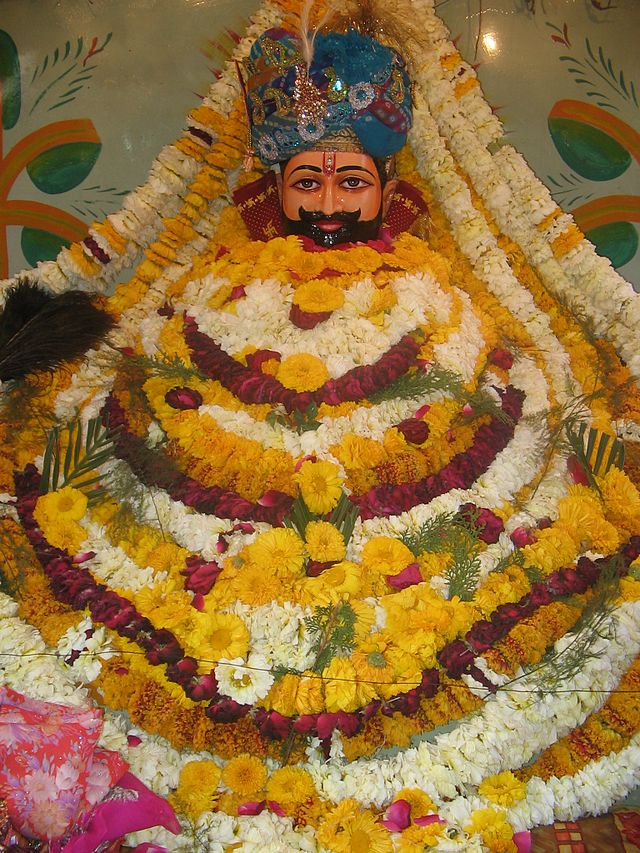 You can keep the image of the deity anywhere you want. Ensure there is no lack of respect or honor in any way or there is no blunder in the way you worship the Lord.

How to worship khatu shyam & various benefits of worshipping him?

Some of the major benefits of the Puja are: 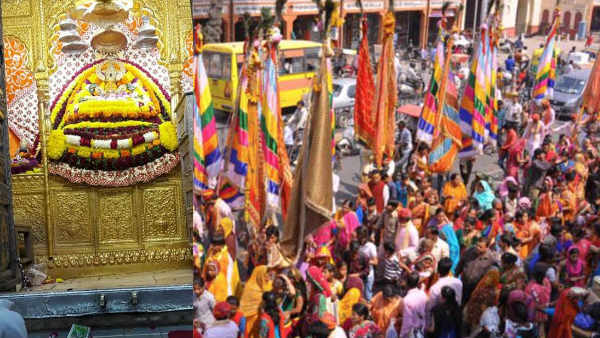 Phalguna Mela
Phalguna Mela is considered to be the most significant connection to the Khatushyam and Shyam Temple Bhatli. The festival happens 8-9 days before the Holi festival. Barbarika’s head showed up on Phalguna Shuddha Ekadashi, the 11th day of the bright half of the Hindu month of Phalguna. The fair was originally held from the 9th to the 12th of that month and subsequently expanded to almost 12-15 days of the bright half of the Phalguna month.

Pilgrims from all over India visit with nishaans (holy mark – flags) in their hands. Devotees honor their holy journey by singing Shyam bhajans and playing numerous musical instruments. Holi is played with gulal. Several Shyam Bhaktas deliver food to pedestrians in the shade of tents. They identify this occasion as the marriage of Khatushyamji. On Dwadashi (the 12th day of the month), Bhog is made and presented as Baba’s Prasad of Kheer and Chaurama.