About God Nagaraja: The Lord of Snakes

» Informational Articles » God-Goddess » About God Nagaraja: The Lord of Snakes

From mystical creatures to unshakable curses, Indian mythology is packed with intriguing and captivating myths and legends. The majority of the tales have been derived from ancient Hindu scriptures such as Vedas, Upanishads and Puranas as well as two of its epic poems: Ramayana and Mahabharata. Indian mythology is filled with celestial beings such as Gods, Goddesses, demi-gods and goddesses, semi-divine deities and various mythical creatures. A specific race that needs to be discussed more in Indian mythology is Naga. 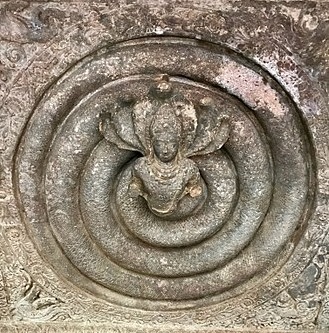 They are viewed as semi-divine deities or a semi-divine race of half-human half-serpent beings that live in the netherworld (Patala) and can sometimes assume human form. Rituals dedicated to these supernatural beings have occurred all through Asia for at least two thousand years. They are fundamentally showcased in three forms: completely human with snakes on the heads and necks, regular serpents, or half-human half-snake beings in Jainism, Buddhism and Hinduism.

A female Naga is referred to as a ‘Nagin’ or a ‘Nagi’ or ‘Nagini’. Nagaraja is viewed as the ruler of Nagas and Naginis. They are the offspring of Rishi Kashyapa and Kadru. As per mythology, Kadru is the granddaughter of Lord Brahma. She was believed to be the mother of one thousand Nagas. This is why the Nagas are also referred to as Kadrooja.

Nagarajas are believed to be snake-like figures that exist in Indian mythology. They are considered to be the rulers of the various races of Nagas. Hindu scriptures talk about three main beings by this title: Shesha, Takshaka and Vasuki. All of them are said to be the offspring of Sage Kashyapa and Kadru.

Initially, Nagas resided on earth but their numbers increased so rapidly that Brahma dispatched them to live under the sea. With majestic jeweled palaces as their abode, the Nagas rule as kings at the bottom of lakes, rivers and the underground realm known as ‘Patala’.

Even though sometimes, these creatures are depicted negatively in specific cultures, they are typically respected a lot as they stand for fertility and steadfastness. They are closely related to ideas of kinship all through numerous South Asian countries. They have become the object of cult devotion, especially in Southern India. They are known to be hugely significant culturally in the mythological traditions of several South Asian and Southeast Asian cultures.

The term ‘Naga’ in the Sanskrit language refers to a snake or serpent. It appears to be probable that the Naga people were a snake-worshipping group who were subsequently labeled as serpents themselves in ancient Indian literature. This change and recognition were much like the Vanaras (forest-dwelling humans) converting into monkeys in later literature.

Origins of Naga in Hindu Scriptures

The Indian mythology Mahabharata epic is the first text that talks about Nagas, explaining them in-depth and describing their stories. The cosmic snake Shesha, the Nagaraja (Naga kings) Vasuki, Airavata, Karkotaka, Takshaka and the princess Ulupi are all portrayed in the Mahabharata. Mahabharata encompasses the history of Nagas or Uragas, along with that of Yakshas, Devas and the sages in detail.

In the Indian epic Mahabharata, Nagas are showcased as creatures with negative characteristics. They are also showcased as the deserving victims of the snake sacrifice and worthy of predation by the avaricious birdman Garuda. The Mahabharata talks about them as ‘persecutors of all creatures’ and states that the snakes contained virulent poison, incredible abilities, excessive strength and an affinity to bite other creatures. The epic also cites Nagas as having a combination of human and serpent-like traits. 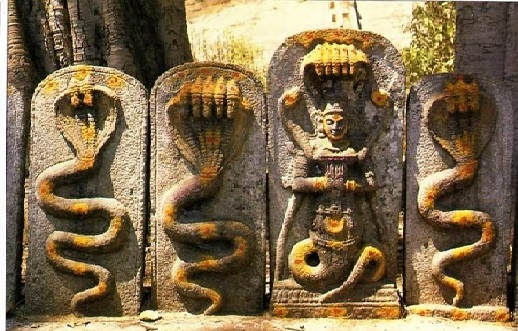 Tales with Nagas are very much part of modern-day cultural traditions in major Hindu regions of Asia comprising India, Nepal and the island of Bali. In the Hindu Dharma, Nagas are believed to be nature spirits, guarding water bodies like lakes, rivers, springs, seas and wells. If sincerely revered, they can help in producing rain, and with it comes prosperity, money and fertility. However, they are also assumed to play a role in bringing catastrophes like floods, famine and drought if they feel insulted by mankind’s insolent actions in connection to the environment since such activities encroach on their natural homes.

Worshipping of the Nagas is believed to have risen from the aboriginal inhabitants of the Ganges valley. In South India, they are considered to stand for fertility and wealth and grand rituals such as Nagamandala are conducted in their honor. The Nagvanshi of North India assume themselves to be a descendant of Nagas. As per the ancient and more recent beliefs, Nagas could be viewed as threatening but if they are treated with reverence and won over with offerings of milk, they may play a role in bringing you fortune and prosperity.

Famous Nagas and their Role in Indian Mythology

Here's a look at some of the most famous Nagas that are connected to Indian mythology.

Shesha
Also referred to as Adishesha, this serpent is the ruler of the nagas. He is one of the children of Sage Kashyapa and Kadru and is believed to be the eldest. According to the Puranas, Shesha was the one who keeps all his planets and universe on his hoods and praises Lord Vishnu. He stands for the friendly nature of snakes, as they are known to protect food from rodents. Lord Vishnu is showcased in deep meditation (Yoga Nidra) with Shesha forming a bed for him to rest. Therefore, this pose is referred to as Anata-Sayana.

Vasuki
Vasuki is one of the offspring of Sage Kashyapa and Kadru. Lord Shiva is closely connected to Vasuki as he is the serpent who is tied around his neck. He is believed to be the King of Nagas and has a gem referred to as a Nagamani on his head. One of the famous stories that he is part of is the ‘Samudra Manthan’ – the churning of the ocean of milk. In this tale, devas and asuras were involved in churning the sea to obtain the nectar for immortality. Vasuki allowed them to use him as a rope to get to the ambrosia of immortality.

Takshaka
Takshaka is a Nagaraja and one of the children of Sage Kashyapa and Kadru. In the Mahabharata, he was the king of the Khandava woods, which was then incinerated by the Pandava Arjuna. Later, Takshaka slayed the grandson of Arjuna, Parikshit.

Astika
Astika was believed to be the son of Jaratkaru and serpent Goddess Manasa. As per the Mahabharata, Takshaka, the king of snakes, was saved by Astika, during the Sarpa Satra. The snake sacrifice was arranged to avenge the death of Parikshit owing to the snake bite of Takshaka. But Astika managed to talk sense into the king to put an end to the victimization of the serpent race. Since then, the day is believed to be honored as Nag Panchami.

Kaliya
A venomous snake called Kaliya was residing beneath the Yamuna River in Vrindavan. No human or animal or bird could venture near the river as the water boiled and gurgled with poison. One day when Lord Krishna was playing with his friends alongside the bank of the river, the ball inadvertently fell into the river. Just as Krishna dived into the river to retrieve the ball, Kaliya emerged with his hundred and ten hoods spitting venom. After courageously fighting and defeating the serpent, Lord Krishna materialized from the bottom dancing on Kaliya’s head. This anecdote is fondly referred to as ‘Kalinga Narthana’ in South India.

Manasa Devi
Mansa Devi is Vasuki’s sister and spouse of Sage Jaratkaru. This Hindu Goddess of snakes is primarily prayed to for preventing as well as curing snakebite and getting rid of diseases like chickenpox, smallpox and so forth. Manasa Devi is known to represent fertility and prosperity. She is showcased as a Goddess who is seated on a lotus, encompassed with or standing upon snakes. Occasionally, Manasa Devi is also seen with her son Astika on her lap. 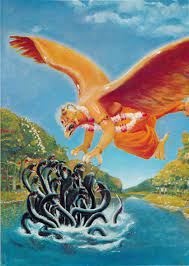 Due to the outcome of a foolish bet, Vinata, one of the wives of Sage Kashyapa, had to serve Kadru. Her son Garuda also had to toil for the snakes as a slave. When Garuda wanted to know what he would have to do to be liberated from his servitude, the snakes informed him that he would have to bring them the ‘amrita’, the nectar of immortality. Garuda robbed the elixir from the Gods and showed it to the serpents to fulfill their condition but he prevented them from drinking it and gaining immortality. From that day, the enormous bird-man Garuda became the nemesis of the Nagas. 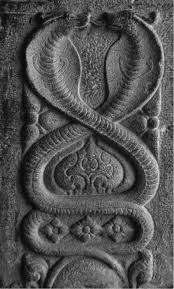 In Hinduism, Kundalini is a type of divine feminine energy (or shakti) thought to be positioned at the base of the spine, in the Muladhara. It is considered to be the force of power connected with the divine feminine or the formless part of the Goddess.

Why is Kundalini denoted by the symbol of a serpent? Well, Kundalini awakening via meditation is usually signified by a serpent because of what the animal has symbolized since ancient times. As the snake is known to cast its skin and regenerate, this is believed to represent rebirth, transformation and the healing of the old form. Serpents have also been assumed as an everlasting and constant renewal of life.

Worshipping snakes is a tradition in India for ages and exists in numerous ancient cultures, where snakes are depicted as a symbol of strength. Snakes are known to cast their skin. This is believed to denote rebirth, death and mortality. Numerous Hindu shrines have snake idols and images entrenched on rocks. These images and idols are venerated with flowers, diyas, milk and incense sticks to achieve prosperity, success and wisdom. Nagas are closely associated with numerous Hindu deities. 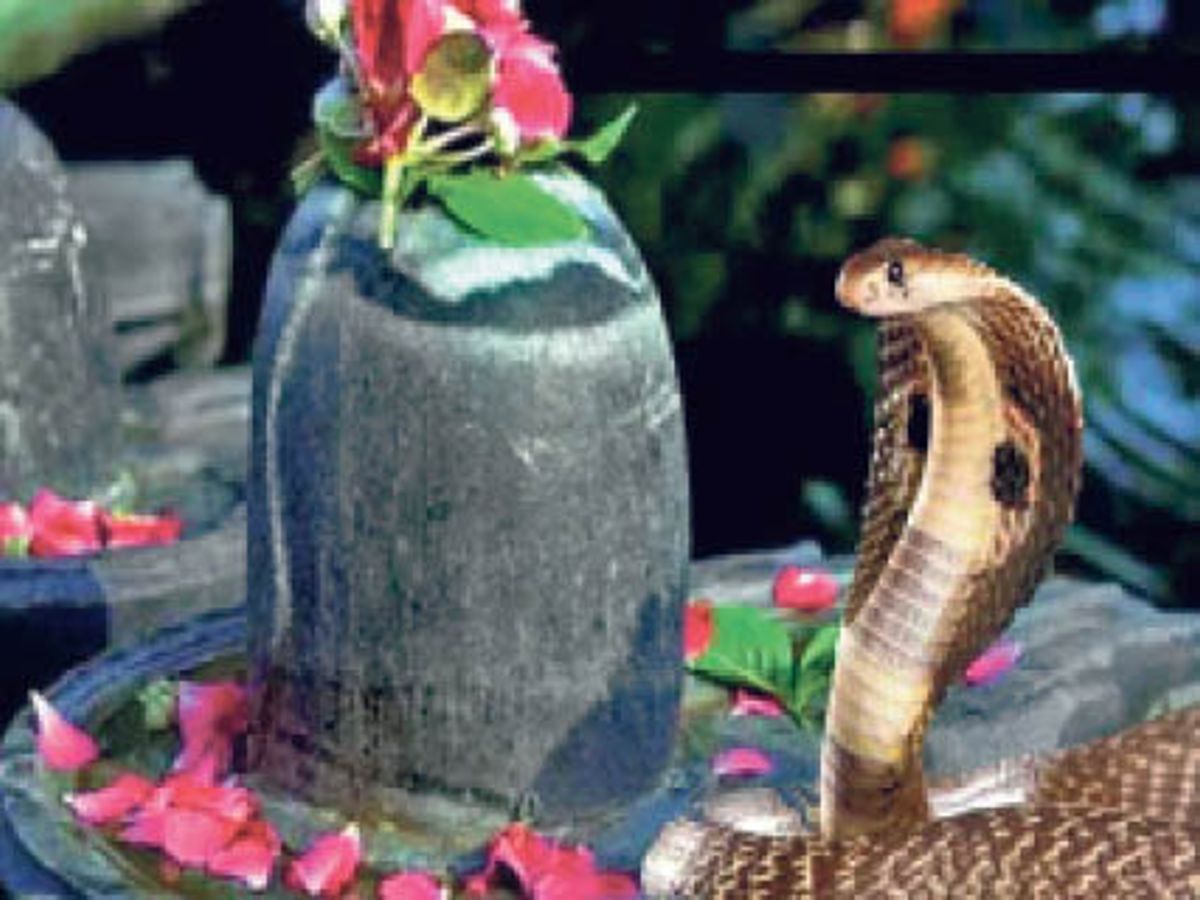 A popular festival that is exclusively devoted to worshipping snakes is called the Nag Panchami. For Hindus, the month of Shravan is devoted to Lord Shiva. This festival pays homage to both Lord Shiva as well as the Nag Devta. It is thought that honoring Nag Panchami will help you get rid of all your sins and will be bestowed with Lord Shiva’s blessings. This day of venerating the snakes is observed with utmost piousness on the Shukla Paksha Panchami, the fifth lunar day in the Moon’s bright fortnight that falls on either July or August.

Nag Panchami is celebrated with great pomp and fanfare in various regions of India. The Nagoba Temple located in Nagpur, Maharashtra, is renowned for having a great Nag Panchami Puja.

Here’s a list of things to avoid doing at this festival: 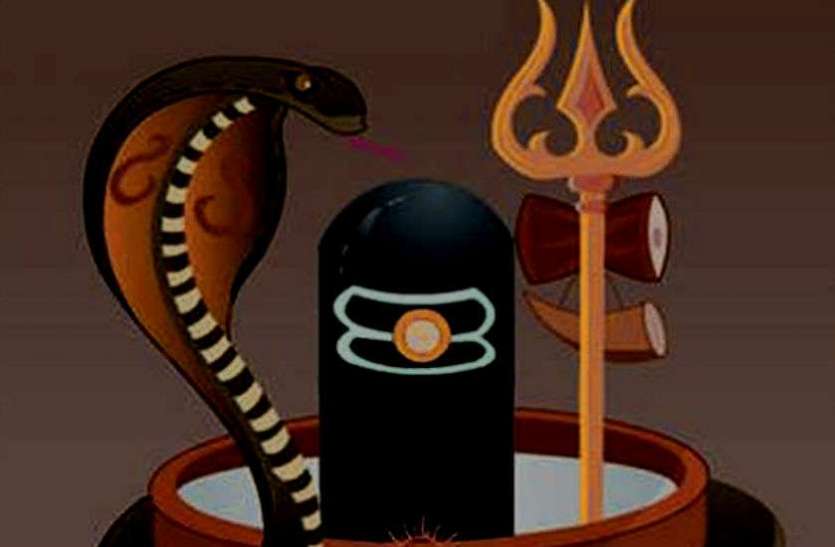 Devotees who pray to Nag Dev on Nag Panchami will be free from all kinds of bad luck owing to malefic planets – Rahu and Ketu. As per worshippers, anyone afflicted with Kaal Sarp Dosh can get away from its damaging consequences. On this day, it is suggested to perform Kaal Sarp Yog rituals to overcome snake phobia and the possibility of being bitten by snakes.