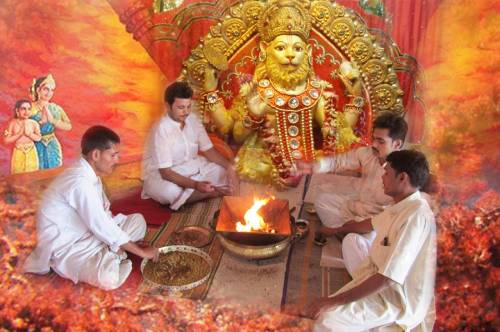 Lord Narasimha (Narasingh, Narsingh and Narasingha) is the most intense incarnation of Lord Vishnu himself. The fourth avatar is known to be fierce to fight and remove all evils against His devotees and protect them from all harms. He is worshipped widely by people who follow the Vaishnava faith. He is regarded as the embodiment of victory of good over evil.

Lord Vishnu's various incarnations have taken place at different times to save His devotees from tyranny of evil and to bless the world. As stated in Puranas, Lord Vishnu had taken a Varaha (Boar) Avatar to get the world back from Patala and kill the tyrant Rakshasha Hiranyaksha. Lord Narasimha was the next incarnation that got rid of the evil Hiranyakashipu who was the brother of Hiranyaksha.
Book Now Lord Narasimha Puja Mantra Japa and Yajna 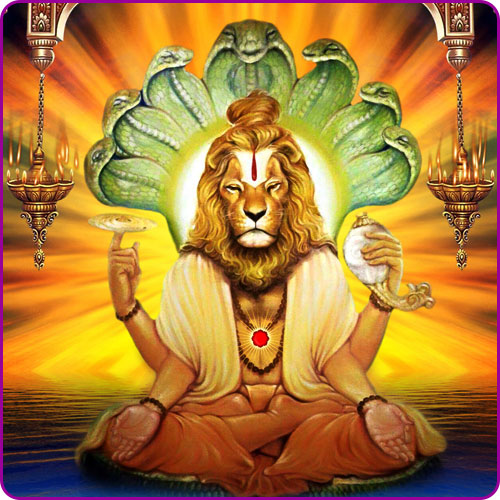 Lord Narasimha figures prominently in numerous ancient scriptures including the Vedas and the Puranas. When Hiranyaksha was slayed by Lord Varaha, his demon brother Hiranyakashipu swore revenge on the Lord and started penance and austerity at Mount Mandarachala for years to please Lord Bramha. When Lord Bramha was pleased with Hiranyakashipu's devotion He appeared before him to grant his wishes. Hiranyakashipu wanted to be the one ruling Lord of all the three worlds “ heaven, hell and earth. He asked Lord Bramha for immortality but it was ruled out. He intelligently thought over and asked for three wishes in total. He prayed to Lord Bramha that he should be granted the boons to be not killed by any man or beast, no God or Devil should be able to slay him, he should not die during day or at night with steel, stone and wood and that he cannot be killed indoors or outdoors or on earth or in sky. Lord Bramha granted these wishes and Hiranyakashipu was considered himself to be immortal with these wishes in place.

He became a tyrant king and banned any prayers of Lord Vishnu or any other pooja by declaring himself as the new God. But Hiranyakashipu's son Prahlad was a great devotee of Lord Vishnu and prayed to him all the time as taught by Narada in whose ashram he was born to Kayadhu. Prahlad was sent to other demons to learn the ways of Rakshashas but Prahlad did not budge from his prayers. In rage Hiranyakashipu ordered his death but Prahlad was saved from every attempt by Lord Vishnu. Finally, Hiranyakashipu took a mace and asked Prahlad if his Lord Vishnu, who was omnipresent according to him, is there in this iron pillar. In rage he struck down the pillar, and to his surprise standing and roaring inside was Lord Narasimha. He picked up Hiranyakashipu with his bare claws, took him in the threshold of indoors and outdoors during the twilight hour and ripped him open in turn slaying him and saving Prahlad. Lord Narasimha's appearance was to trick the boon granted to Hirankyakashipu where he was neither Man nor a Beast.

The form and outlook of Lord Narasimha teach us that evil does not triumph over good. Those who support malevolence will be annihilated by God as He is everywhere. He listens to true prayers of His devotees and eventually appears to wipe out the evil around them and restore faith in goodness. The act of Lord Narasimha tearing out of the pillar and saving Prahalada is a corroboration of that discussed above.

Meaning of the Mantra:
This Mantra helps in pleasing and praising the Lord who has the form of a Lion. May the power of a Lion be infused in our thoughts and actions.

Meaning
This mantra helps in meditating on the Lord Narasimha's form that has Lion like bright face, sharp claws and fierce teeth.

Meaning
This mantra praises the Lord and helps devotees to offer complete devotion to the heroic Lord Narasimha, remover of the evil and all dangers in life.

Devotees need to remember that for worshipping Lord Narasimha, one needs to engage in complete attention to detail and vigilance on account of His ferocious disposition.