Meditation with the Mantra

Meditation with the Mantra 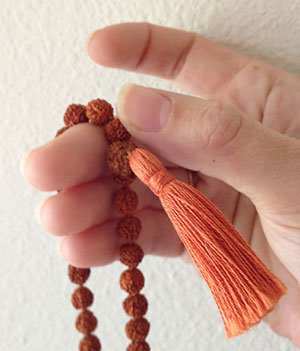 There are various practical aids to progress in Japa meditation that has been tested for thousands of years and are based on sound psychological and natural principles.

The Japa with rosary beads is the most effective form & most familiar to West. A Japa mala, similar to rosary, is often used in Mantra repetition. It helps to foster alertness, acts as a focus for the physical energy and is an aid to rhythmic, continuous recitation. It consists of 108 beads. An additional bead, the Meru, is slightly larger than the others. It is the signal indicating that with one Mantra recited for each bead, japa has been done 108 times, or one round of mala is complete. The fingers should not cross the Meru. When it is reached to Meru, the beads are reversed in the hand; one continues reciting the Mantra, moving the mala in the opposite direction. The thumb and the third finger roll the beads; the index finger, which is physically negative, is never used. The rosary must not be allowed to hang below the navel, and should be wrapped in a clean cloth when not in use.

An appropriate prayer before beginning induces purity of feeling. With eyes closed and concentration focused either between the eyebrows on the Ajna chakra or on the Anahata chakra of the heart, one should invoke the aid of his chosen deity. The Mantra must be pronounced distinctly and without mistakes, for it and the deity itself are one and the same thing. Repetition must be neither too fast nor too slow, and thought must be given to its meaning. Speed should be increased only when the mind begins to wander. Because the mind will naturally try to drift away after a time, it is necessary to keep alert throughout the practice.

Variety in Japa is necessary to sustain interest, avoid fatigue and counteract the monotony that can arise from constant repetition of the same syllables. This can be provided by modifying the volume. The Mantra can be repeated aloud for a while, then whispered, and then recited mentally. The mind needs variety or it becomes tired. However, even mechanical repetition that is devoid of feeling has a great purifying effect. Feeling will come later, as the process of purification continues.

Audible repetition is called Vaikhari Japa, while that done by whispering or humming is termed Upamsu japa. The Mental repetition, Manasika japa, is the most powerful; it requires keener concentration, for the mind tends to shut off after a period of time. The advantage of loud Japa, which should be used with discretion, is that it shuts out all worldly sound and distractions. One should alternate when necessary, particularly when drowsiness sets in.

Unaccustomed to this kind of activity, the beginner at first may find himself giving up too soon, after five or ten minutes of repeating the Mantra. The syllables in this case may sound meaningless--mere syllables and nothing more. But by chanting for at least half an hour without interruption, one will give the Mantra time to work itself into his consciousness, and benefits will be felt in a few days.

Meditation on the image of the chosen deity while the Mantra is being repeated adds tremendously to the efficacy of Japa. Sound and form correspond and reinforce each other. Sound vibrations alone, if made with care and devotion, are capable of producing the form in the consciousness of the aspirant. The process can be greatly facilitated by visualizing the deity in the heart area or the space between the eyebrows. With the visualization, there should be awareness of the various attributes of the deity. Feeling that the Lord is within, emanating purity to the heart and mind, and manifesting his presence by the power of the Mantra makes the Japa fruitful.

Thus, while meditating Shiva, the physical energy is focused on rolling the mala beads. The image of the deity, with the third eye and the symbolic crescent moon, serpents, trident, drums, etc. occupies the mind on one level. The Mantra Om Namah Shivaya is simultaneously being repeated, and on another level is being embedded in the consciousness. Repetition of Mantra has a cumulative effect, and with continued practice it gains power. It should be evident that Japa meditation is far more than a verbal exercise. It is a state of complete absorption.

Concluding prayer and rest are important. When Japa practice is finished, it is advisable not to plunge immediately into worldly activities. Sitting quietly for about ten minutes, one should reflect on the Lord and feel his presence. As routine duties are commenced, the spiritual vibrations will remain intact. This practice should be maintained at all times, no matter what one is engaged in.

When doing manual work, give the hands to work but give the mind to God. Like an elderly woman who continuously knit even when talking to her friends or watching television, one can sustain mental Japa. With practice, the manual work becomes automatic. When the Mantra can be repeated throughout the day, Godâ€™s consciousness will permeate oneâ€™s life.

Mantra writing, likhita japa, is another, supplementary form of Japa. The Mantra should be written with a special pen and notebook, which have been set-aside for this purpose. It should be done for half an hour, during which time complete silence and concentration are observed. While writing, simultaneously repeat the Mantra mentally so that the impression made in the consciousness will be intensified. Likhita Japa may be done in any language or script. It greatly helps the aspirant to concentrate and leads to meditation. This practice helps to set up a continuous vibration of divine energy that guides and protects, regardless of what one is doing.

Deity Mantras are used for purascharana, which is concentrated japa meditation extended over a long period of time. When performing a purascharana, the aspirant sets aside a number of hours each day for japa. The Mantra is repeated 1,00,000 times for each syllable of the Mantra. The Mantra is repeated with feeling and in a particular manner with the right observance, until the fixed numbers of Mantras are recited. Slow repetition of Maha Mantra may take as long as three years to finish. The practitioner must observe certain rules and regulations lay down in the scriptures in regard to Purascharana and must observe perfect dietary discipline in accordance with those injunctions.

Anushathana is the practice of religious austerity for the sake of obtaining some object or goal, the highest being spiritual. For the success, the desire should be spiritual, and it should be kept in view throughout the practice. The rigor of the austerity, which may be various kinds, depends on the health of the aspirant.

For Japa Anushathana, a Deity Mantra should be selected in accordance with the desired goal. Although his personal deity might be Krishna, if one wants to compose sublime music, he would repeat the Mantra for Saraswati; if one wished his spiritual obstacles to be removed, one must pick a Ganesha Mantra. Japa meditation is then performed for a protracted period, with intense concentration of mind and no thought of the external world. This leads to achievement of the desired goal.

There may be other types of Japa meditation, but the broad theory and techniques do not greatly vary. Approached with faith and devotion and carried out with perseverance, Japa is the most beautiful, soothing & direct path to awaken consciousness & god realization.