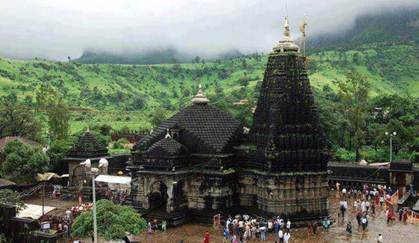 Trimbakeshwar (Tryambakeshwar) Temple is one of the prime ancient temples in India dedicated to Lord Shiva. Located in Trimbak (Trimbakeshwar tehsil) in the Nashik District of Maharashtra, the Temple is regarded as one of the twelve sacred Jyotirlingas. Also it is important to note that the longest river Godavari originates near Trimbak. The Temple premises have a holy kunda (pond) called Kusavarta which is the source of Godavari.

This place is renowned and glorified for Shiva pujas and and also the numerous religious rituals (vidhis) such as Narayan Nagbali, Kalsarpa Shanti, Tripindi vidhi and all types of Shradh rituals for the deceased. Ancient scriptures such as Dharma Sindhu mention that the religious rites and rituals for pacifying the departed souls and for relieving oneself of Kaal Sarpa dosha should be performed only at Trimbakeshwar. This is also corroborated in the scriptures like Skanda Purana and Padma Purana.


Ancient Significance of the Temple: 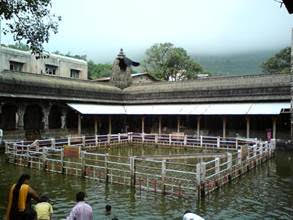 The Temple houses three Lingams associated with Brahma, Vishnu and Mahesha (Shiva) with a water body called Amritavarshini (meaning the rain of nectar) as well as Bilvatheertha, Viswananthirtha and Mukundathirtha, being other water bodies. One can see the ancient images of various deities such as Gangadevi, Jaleswara, Rameswara, Gautameswara, Kedarnatha, Rama, Krishna, Parasurama and Lakshmi Narayana inside the Temple.

It is located between three important hills Brahmagiri, Nilagiri and Kalagiri. In the Brahma Purana, the Gautami Mahatmaya (Chapter Five), it is stated Lord Brahma in order to create moving and non-moving living entities selected the Devayajana Mountains for tapasya (sacrifice). These Mountains were later called as Brahmagiri meaning the hilly regions of Brahma. In the Brahmagiri, there’s a river called River Gautami. Gautama Maharishi and his wife Ahalya lived here. Once the Maharishi accidently killed a cow (maya dhenu) which was actually a celestial cow sent my Lord Ganesha. To atone for this grievous sin, the Maharishi traveled to Nashik and observed tapasya in order to please Lord Tryambakeshwara (Shiva). He asked Shiva to send the Ganges over the cow (to liberate her). Pleased by his tapasya, Shiva diverted Ganges cleansing the cow, which led to the emergence of River Godavari.

The Shiva Purana mentions that when Bramha and Vishnu argued over their supremacy of creation; Lord Shiva pierced the universes by being an endless beam of light. Both Brahman and Vishnu could not find the ends of the Light which represented infinite powers of Shiva. The Light fell on the earth at twelve places and these places or the shrines are now said to be the Jyotirlingas. The Jyotirlinga is the Supreme Shiva Himself also represented and known as Lingodbhava.

There are total twelve Jyotirlingas including the Trimbakeshwar one. The other eleven are:

Pujas Performed at the Trimbakeshwar (Tryambakeshwara):

The Trimbak Temple is well-known for Shiva Pujas like Rudra abhishek, Mahamrityunjaya japa, Rudram and Vedic rituals especially Narayan Nagbali, Kalsarpa Shanti and Tripindi Shraddh that are performed here only in the whole of the country.

Narayan Bali Puja described in the Garuda Purana is performed to satisfy and liberate one’s Pitru (ancestors) from the bondage caused by unnatural death due to starvation, animals, accident, arson, curse, epidemics such as cholera or other diseases causing untimely death, suicide,, fall from a mountain, tree or any height, drowning, murder, snake bite and lightning.

When a man dies (accidently or untimely) with an unfulfilled desire, he (soul) does not attain Mukti (liberation) and roams around the earthly atmosphere inflicted with the unfulfilled desire. Every soul after death goes toward the Sun (divine aspect of the Lord) but certain unfulfilled desires don’t let them do so. So the soul of the departed man creates problems such as struggles, poverty, accidents, mental stress, ancestral curse, family disputes etc. for his descendants. Therefore it is important to perform Naryana Bail puja in order to pacify and liberate one’s ancestors.

Nagabali Puja was recommended by Shaunak Rishi (Bhagvat Purana). It is performed to get rid of a sin of killing a snake like Cobra which is revered in scriptures and worshipped in India. When a man collects material objects or is too attached to a material object letting no one touch or use it, he dies like a snake seated on that object. So if you come across such a snake (who was the possessive man in its previous birth) and kill it accidently, you are cursed by the snake. And the curse results into various bodily diseases or physical pains. Therefore, to get rid of such diseases, it is important to perform Nagabali Puja. 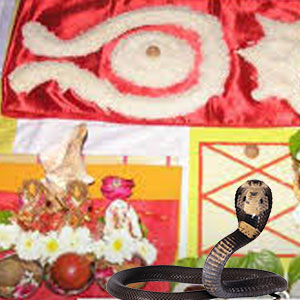 Kaal Sarpa Shanti puja is performed to nullify Kaal Sarpa Dosha which negatively impacts every aspect (personal, professional social etc.) of your life. A person afflicted with the Kaal Sarpa Dosha is said to experience the unusual such as seeing the dead or recently departed family members in his dreams.

Issues caused include, delays and obstacle, emotional instability, low confidence, bad health, loss of wealth, irrecoverable business losses, mental anxiety, deception by friends or enemies, no support from the dear ones, the endless struggles and no enough credit to the efforts.

What causes this Dosha? If a person kills or causes the death of a snake or an innocent animal, he attains the Kaal Sarpa Dosha in his next birth. So the current unexpected problems are the results of Kaal Sarpa Dosha due to killing a snake or an innocent animal in the previous birth. In the Vedic astrology, when all the seven planets come between Rahu and Ketu he is said to have this dosha. 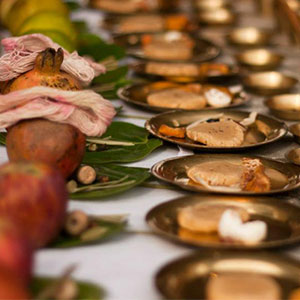 Why Narayan Naga Bali, Kaal Sarpa Vidhi and Tripindi Shraadh Puja are performed at the Trimbakeshwar (Trayambakeshwar) only?

Trimbakeshwar Temple houses three Lingams associated with Brahma, Vishnu and Mahesha (Shiva) with the ancient images of various deities such as Gangadevi, Jaleswara, Rameswara, Gautameswara, Kedarnatha, Rama, Krishna, Parasurama and Lakshmi Narayana. All these aspects make the Temple the holiest, the most sacred, the most auspicious and the most divine where the reactions of sins, demonic acts etc. are curbed, curtailed and nullified. It is this Temple where River Godavari originates, and who is the purity personified at the feet of Shiva washing away the sins of surrendered living beings. Another reason is Lord Shiva’s absolute divinity. It is mentioned in the Bhagavat Purana (8.7.22) that when the poison Halahala was produced during Churning of the Ocean (Samudra Manthana) for nectar of immortality, the Prajapatis prayed to Shiva this way:

At the request of the Prajapatis, demigods and other heavenly personalities, Lord Shiva said to His consort Bhavani (Parvati) (Bhagavata Purana 8.7.38) आसां प्राणपरीप्सूनां विधेयमभयं हि मे एतावान्हि प्रभोरर्थो यद् दीनपरिपालनम् ‘It is my duty to give protection and safety to all living entities struggling for existence. Then Lord Shiva, who is always devoted to auspicious, benevolent work for living beings, compassionately took the whole poison in his palm and drank it. Thus all of them were saved.

‘Trayambak’ means the Three-Eyed. Lord Shiva is addressed as the ruler in the above verse indicating He is the master of Past, Present and Future, the three modes (guna) of material nature (Sato, Tamo and Rajo), Creation, Maintenance and Destruction etc. It is Shiva only who knows the past, present and future births of living beings. Therefore, it is very important to pacify all the Pitrus (ancestors) and the snakes at the lotus feet of Shiva by whose mercy Godavari flows washing away the sins accrued even from the previous births. 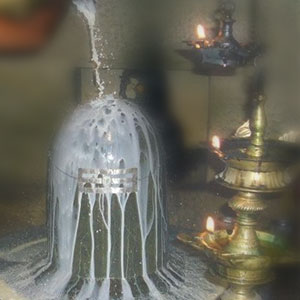 ‘Rudra’ means the one who is terribly infuriated, which is one of the divine qualities of Lord Shiva who causes change in the form of destruction of ego, illusions and the false identification with the matter. While under destruction, nothing is actually destroyed but the illusion of individuality. Abhishek means a method of worship offered to the Divine who opens a new path by destroying ego and false identification with one’s material existence. Mahadev is Satyam, Shivam, Sundaram or Truth, Goodness and Beauty that cannot be surpassed. Shiva signifies the most essential goodness.

Rudraksha Abhishek performed in Trayambakeshwar is highly auspicious and immensely rewarding or beneficial.

Rudra Centre has it’s own divine temple in this holy city. Narayan Nagbali, Kaal Sarpa Dosha, Tripinda Shraadh pujas are performed here by the able karmakandi Pundits. All the rituals are performed as instructed in the scriptures. 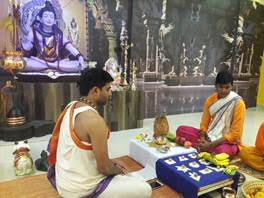 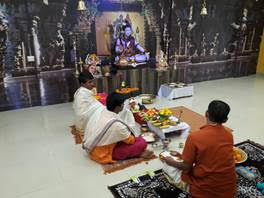