Sakat Chauth falls on Sankashti Chaturthi or Sankatahara Chaturthi of the Hindu calendar month of Magh(Gregorian month January-February), on the fourth day of Krishna Paksha(waning Moon phase). Chaturthi is the fourth day after Poornima (full Moon) of every month and is an auspicious day dedicated to worshipping Lord Ganesha or Vignaharta. A vrat (fast)is observed on Sankashti Chaturthi from morning and broken only after Moonrise, after seeing the Moon. Observing a vrat (fast) and worshipping Lord Ganesh on this day is highly meritorious and bestows blessings of wealth, prosperity, success and dissolves all hindrances from life. On Sakat Chauth Goddess Sakat or Sakat Mata is worshipped. It is an important day for women as they keep the Sakat Chauth ka vrat and pray to Sakat Mata for protection and wellbeing of their children. Sakat Chauth is also known as Sankat Chauth, Til-Kuta Chauth, Maghi Chauth and Vakratundi Chaturthi, in the various regions of India. It is compulsory to hear or recite the Sakat Chauth Vrat Katha before breaking the Sakat Chauth fasting. Sakat Chauth or Sankat Chauth is popularly celebrated in the northern regions of India.

The Sankashti Chaturthi which falls on a Tuesday is called Angarika Sankashti Chaturthi and is considered especially auspicious. It is said that worshipping Lord Ganesh and keeping a vrat on this day, by following the vrat vidhi with sincerity, alleviates troubles and obstacles of all kind from the life of devotees and fulfils wishes, by the grace of benevolent Lord Ganesh. 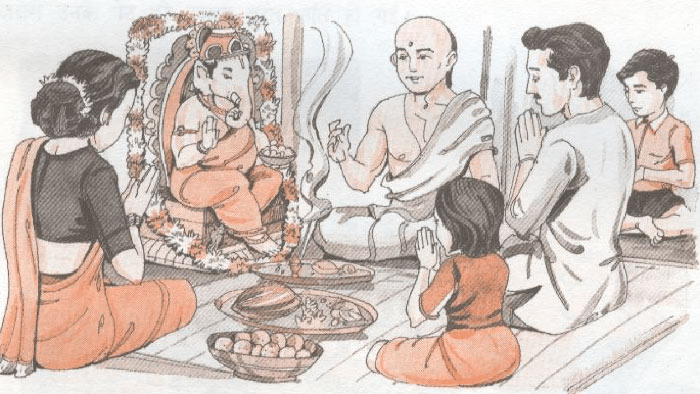 As Sakat Chauth falls on Sankashti or Sankatahara Chaturthi it is a powerful day to worship Lord Ganesha for removing problems or ‘sankat’ from any aspect of life and for blessings of wealth, prosperity, success. Keeping a vrat and praying to Lord Ganesh fulfils wishes of the devotees. He bestows Riddi and Siddhi to His devotees. Devotees either observe dry fast or drink water but abstain from having food.

It is believed that observing vrat on Sankashti Chaturthi and worshipping Lord Ganesh on this day aids in getting relief from afflictions caused by malefic planet Mercury, if reflected in the Birth chart.

It is also beleived that couples who are facing challenges in conceiving or are having problems in child birth, can get favourable outcome by observing Sakat Chauth ka vrat and by performing Sakat puja with devotion, on Sakat Chauth.

The importance of Sakat Chauth becomes more evident in the Tilkuta Vrat Katha. 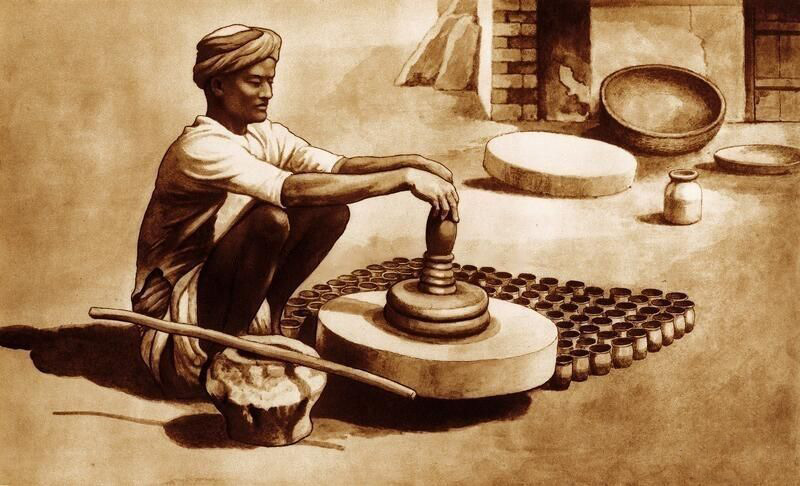 Once upon a time, in a kingdom there lived a potter who used to make clay pots and utensils. In a certain year the potter faced a strange problem. The pots which the potter was making were not getting baked in the Klin and remained half baked. When his repeated efforts failed, he got worried and went to the King and expressed his concern about the same. The King consulted the Rajpurohit (Royal priest), who advised that every time that a Klin is made in the kingdom, a child would have to be sacrificed, offered as “Bali”. The King made an announcement that every family will have to give one child for Balidaan when a Klin is made.

The people of the kingdom had no other choice but to follow the King’s order. In due course of time, it was the turn of an elderly woman who had only one child, a son. She became extremely sad and worried about losing her only child and also feared that she would not have anyone to look after her. The day the elderly lady’s son was supposed to be sacrificed was Sakat Chauth and the lady was an ardent devotee of Goddess Sakat. Her faith and trust in Sakat Mata was so strong that she knew that there would be some miracle and her son would be saved by the Goddess’s divine intervention.

The elderly lady worshipped Sakat Mata and prayed to Her for protecting her son. She then gave a betel nut from the puja to her son and as a ‘Suraksha Kavach’ (protective shield), she gave him a “Dub ka Beeda”. She told her son to continuously go on chanting Goddess Sakat’s name and asked him to have trust in the Goddess to save and protect him.

When the time came, the elderly lady’s son was made to sit in the Klin and the fire was lit. The lady started praying to Sakat Mata with more devotion. The burning Klin was left to get prepared for the next few days. However, the following day when the potter (to whom the new Klin belonged), came to check it, he found that the Klin was completely baked and ready to be used. Usually it took days to get ready. He was surprized! What he found next shocked him. He found the son of the elderly lady alive and without a scratch on his body. To add to that, he found all the children who were previously sacrificed, alive, without any harm or injury. This was a miracle by the grace of Sakat Mata. The Goddess had returned all the children to their respective families safely. The people of that Kingdom understood the immense power and compassion of Goddess Sakat, and they praised the elderly lady and her son for their unshakable faith in the Goddess. Thus, the day of Sankatahara Chaturthi is also a day to adore and worship Goddess Sakat and is a significant part of Sakat Chauth celebrations. 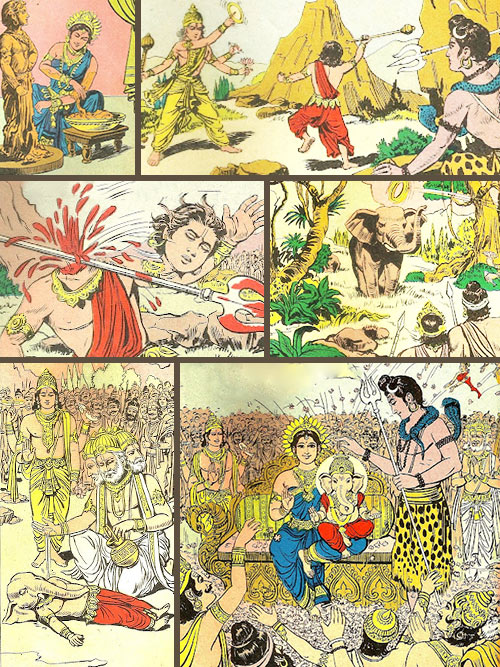 One of the versions of the Sankat Chauth ki kahani is about the legend of Lord Ganesh. Goddess Parvati had created Ganeshji from the paste of turmeric that She used for bathing. When the beautiful idol was created Maa Parvati breathed life into Him and considered Him, Her son. She asked Her son to guard the door while She bathed and not allow anyone to enter. Lord Shiva, consort of Goddess Parvati, was not aware of this new creation of His wife. He came to meet Parvatijee and found the a boy standing guard on the door. The boy refused to let Him in. All the efforts of Lord Shiva failed and the divine Lord got angry at not being let in to meet His wife by a stranger. In fury Lord Shiva severed the head of the boy. Hearing the noise outside, when Goddess Parvati came out She was aghast to see Her son’s dead body without a head. When She found out that it was Lord Shiva’s doing, She got overwhelmed with grief and was infuriated. She told Shivjee that She considered the boy Her and His son and that the boy was Her creation. She refused to hear anything and told Her husband that She wants Her son back.

Having understood the seriousness of the situation, Lord Shiva promised Parvati Maa that He would restore the life of Her son. Lord Brahma suggested that since the head of the boy could not be found, Lord Shiva should put the head of the first animal that He saw, on the body of the boy. The first animal Lord Shiva found was an Elephant who willingly gave his head to Lord Shiva and He attached the Elephant head to the body of the boy and brought Him back to life. Goddess Parvati was overjoyed on getting back Her loving son. Lord Shiva then announced that the boy would be named Ganesh, the Lord of the ganas, and would be the first deity to be worshipped before any Puja or religious rituals. Without worshipping Ganesh first, no deity’s worship would be accepted. Thus, the powerful Elephant headed God, Lord Ganesha came to existence and revered by devotees. 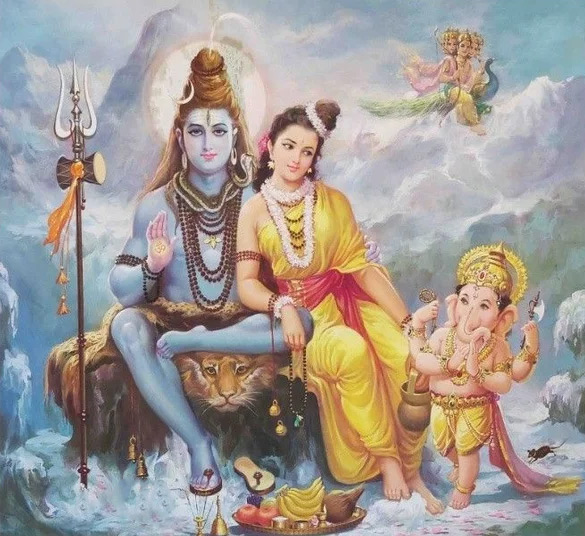 Another Sakat ki Kahani is about the importance of the Krishna Paksha chaturthi of Magh, is an interesting story about Lord Ganesh and Kartikeya(Murugan). Once Lord Ganesh and Kartikeya were fighting with each other to have the single piece of a special fruit. Lord Shiva put His sons, to test, to win over this special fruit. He asked both of them to revolve around the earth thrice and said that whoever would be able to complete the task first, would win the fruit. Lord Kartikeya immediately set off on His Peacock mount to complete the task. Lord Ganesh made His parents, Lord Shiva and Goddess Parvati sit together and circled them three times and asked for His prize. But both Lord Shiva and Parvati Maa told Him that He had not completed the challenge and so could not be given the special fruit. Then Lord Ganesh explained and reverently told His parents, that as His parents, they were the world for Him and considering that He had circled them thrice. Lord Shiva and Parvatijee were impressed and gave Him the special fruit as a well deserved prize. Lord Shiva announced that whoever worships Lord Ganesh on Sankashti Chaturthi, all their “sankat” or problems will be resolved easily and they will be divinely blessed with material and spiritual abundance, good health, happiness and contentedness.

This Sakat ki katha beautifully teaches us the importance of our parents and that everyone should respect and love their parents as their world. Loving and serving our parents bestows invaluable blessings.

For alleviating problems and hurdles from life.
For protection, longevity and wellbeing of children.
For success, prosperity, good luck, spiritual growth.
For benevolent blessings of Lord Ganesh and fulfilment of wishes.