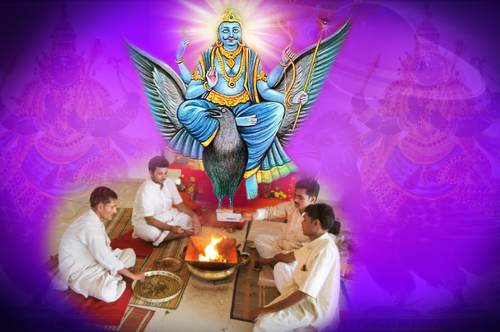 How to please Shani Dev?

As per the Vedic astrology, Doshas are flaws in the placements of planets in the horoscope of an individual that cause bad to malefic effects on an individual's life. The effects vary from the person to person due to positioning of any planet. There are nine doshas based on the nine astrological planets, like; Sun, Moon, Mercury, Venus, Mars, Jupiter, Saturn, Rahu and Ketu. Apart from these nine, there are four other doshas that affect the human lives, they are; Vastu dosha, Kaalsarp Dosha, Pitra Dosha and Chandal Dosha.

These doshas cause health problems, mental unrests, marital discords, and failures in life. These doshas can be pacified and their effect nullified by performing the Dosha Nivaran Pujas. These pujas bring back peace and harmony in life, and help us grow ahead on the path of success.


When does Sade Sati occur?

Shani Dosha or Sadi sati (malefic Saturn) occurs when Saturn is weakened or occupies any of the fundamental houses such as 1st, 4th, 7th and 10th or 8th and 12th houses in Aries, Cancer, Leo, or Scorpio sign or is retrograde in those Houses except the Libra, Capricorn and Aquarius signs. He indicates his lordship over the ascetic, rich with inner spirituality, and lost to this material plane of existence. 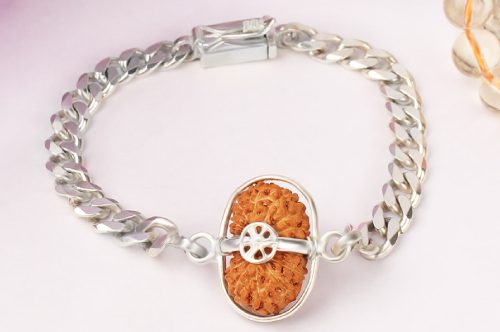 Beautiful bracelet made of natural 17 Mukhi Rudraksha for the power of manifesting wealth and superior intuition. Designed as per RRST it bestows self-control, creative intelligence, luck and enhanced intuition to fulfil all desires and attain prosperity. The Rudraksha being governed by Shani Dev is very helpful in pacifying the malefic of planet Saturn and provides relief during the period of Shani Sade Sati. It also helps awaken the Ajna Chakra and helps find a good life partner. 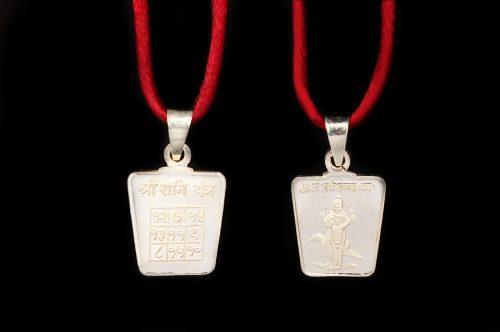 Silver pendant featuring Siddh Shani Yantra for relief from Shani Sade Sati and blessings of Shani Dev. The Yantra is helpful in overcoming any financial crises and difficulties in life. It helps develop confidence, intuition, self-control and correct judgement to make the right decisions and fulfil all desires. It enhances the confidence of the wearer and bestows courage and confidence. The Yantra is helpful in overcoming the difficult phase of life caused due to malefic of Saturn and achieving Raj Yog. 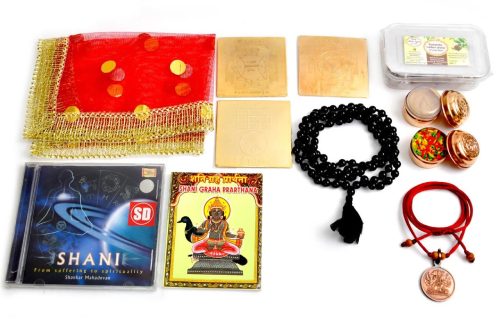 A powerful protection kit for those affected by Shani Dosha and Shani Sade Sati in horoscopes. The kit contains Shani, Mahakali and Hanuman Yantras and puja kit to attract divine blessings and pacify malefic of planet Saturn. The Yantra helps remove all difficulties relating to finance, mental and physical health and give the courage to overcome negativity. It bestows intuition power, good judgement and right decision-making skill to attain success in business, career and other worldly matters. 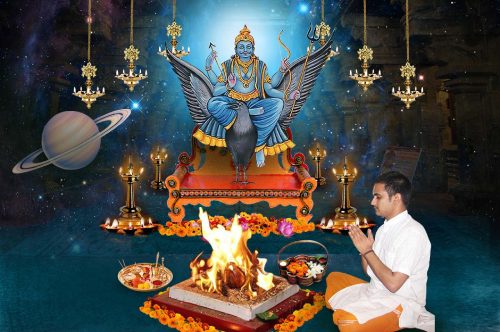 Powerful monthly Vedic puja to nullify malefic effects of planet Shani, Shani Sade Sati of Shani Mahadasha and Antardasha. Conducted by a team of learned priests with Vedic austerities, the puja is effective in removing hardship like poverty, losses, misfortune and debts caused due to malefic of planet Saturn. And brings positive changes in life by bestowing wealth, success, prosperity, high status and protection. It removes obstacles in the path to success and brings stability in life.

What are the durations of Sade Sati?

He is generally known to affect one adversely on occasions when he occupies certain positions in one's horoscope like Saade Sati (7 1/2 years) Ashtama Shanaiswara (Saturn in 8th house - 2 1/2 years) etc. He is the Lord of Makaram and Kumbam. He is the slowest moving planet taking 2 1/2 years in each zodiac, completing one cycle every thirty years.

Astrologically well-placed Shani blesses you with prosperous career, healthy life, and fulfilment of all your wishes and desires. You donâ€™t need to run after money and riches; instead they come to you. Lord Shani is neutral in giving material prosperities and giving suitable punishments to you according your deeds or acts. But when Shani (Saturn planet) is deliberated, you have to face the following: 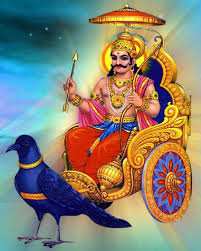 Qualities of Shani: the god of justice and punishment:

Being one of the nine planets, Saturn personifies Lord Shani that means anay Kramati Sa; the one who moves slowly. As per Vedic scriptures, he is the elder son of Surya (Sun god) with Yama (the god of death) being the younger. Shani was born of Chhaya (Shadow) who was created by Sun's first wife Saranyu upon being unable to bear her husband's radiance. Lord Shani is the god of punishment, deliverance of justice and hardships. He gives the results of your actions throughout your life whereas his younger brother Yama gives the results of your actions after death.

Remedies for Shani Mahadasha: How to please Shani Dev?

Vedic scriptures call Shani as the greatest teacher, well-wisher and punishment giver. He teaches hard lessons by putting you in the loops of struggles, hardships and at times frustrations, just to keep you grounded so that you refrain from daydreaming, being overambitious and creating inner fantasies.

Once you learn these lessons, Shani rewards you to your hearth's content. With his blessings, the rich lose everything and the poor gain everything overnight.

So, whenever you face struggles, constant disappointments, failures or unfulfilled wishes, know that these are all Shani's blessings working in the background to mould you for better.

O Shani Chalisa:
It is a 40-verse treatise praising Lord Shani and his divine qualities. It is said that by chanting the Chalisa, one is blessed with tolerance, patience and humility through the phase of Sade-Sati. One the phase is over, the native is blessed with fulfillment of all the desires that were unfulfilled during the phase. For more information on Shani Chailsa and Stotram visit:


O Hanuman Chalisa :
Reciting Hanuman Chalisa on Tuesdays, Saturdays or everyday makes you stronger mentally and emotionally. Lord Hanuman rules planets Mars and Saturn. Those suffering from the malefic effects of Mars (Mangal Dosha) and Saturn (Sade-Sati) in their horoscopes may worship Hanuman and sing his chalisa.

O Wear gemstones of Shani :
The gem associated with Venus is Blue Sapphire to be worn on the left middle on a Saturday. Â Blue Sapphire helps the wearer in being more charismatic, intuitive and intelligent. It leads to peace of mind through acceptance and a good judgment.

O Use energized Shanti Yantras :
A Shani Yantra is as powerful as chanting his Chalisa. It is recommended for those undergoing the effects of Sade Sathi or Saturn Return. Benefits of using a Shanti Yantra are listed below:


Significance of 19000 Japas for Shani Dosha

Chanting of Vedic Mantras is meritorious and has been a practice since ancient times by the Hindus. Chanting the Shani Mantra(Vedic), given above, for 19000 times is one of the ways of Shani Dosha Nivaran. To do the Shani Mantra Japa, the native needs to know to learn the Japa with clear pronunciation, first to start the Shani Mantra Japa. The 19000 Japas need to be done at a stretch, by daily doing a certain number of Japas. The Shani Japa should be started on Saturday (Shanivaar). Set the intention of the Japa, be focused and in surrender to Lord Shani, while doing the Japas. Additionally wearing black clothes while doing the Japa may help to garner Lord Shani's blessings. 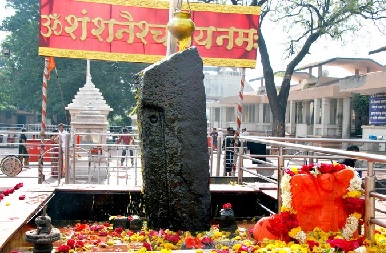 Shani Shingnapur village is famed for its temple dedicated to Shani - the planet Saturn. A remarkable fact is that there are no locks on any of the doors in the village are it residential or commercial, including the bank. Local legends claim that the village is 'protected' and no thief can cross its borders without dying. Skeptics please note that the village has remained theft - free in recorded history. Shani-Shingnapur is a famous pilgrim center near Nashik in Maharashtra, which is also known for its door-less mystery. The unique feature of Shani-Shingnapur is that there is neither any image of specific deity nor any particular idol, but there is a stone pillar, which is supposed to embody the image, which is worshipped with deep respect and reverence.The specialty of this temple is that there is no image or Pandit who performs the puja. Male devotees before entering into the temple take a head bath in the holy waters close to the temple and wear saffron cloth. The puja is carried out in the form of Pradakshanas, where in the devotee go around the idol a couple of times, chanting prayers.

Devotees also perform 'Abhishekas' (rites involving pouring of certain liquids over the idol) with water and 'Til' (mustard) oil. Thousands of people including a few famous personalities gather on Shani Amvasaya to perform Puja. In this village one can find the houses having gaping, rectangular spaces at the facade of every home. No doorframes, no latches, no padlocks or any other safety measures to guard the house are found. It is believed that nobody dares to steal anything because then it is believed that if they do so Shani Deva, the local deity, punishes them. It has been proved that even if something is stolen, the owner has always got the stolen things back. There is also a belief that if a snake in Shinganapur bites a person, he is brought to the temple and a ritual is performed in front of the idol, which neutralizes the poison. Devgad is a village located to the east of Shaneshwar, which is famous for Shri Datta temple. The temple is open for the visitors for 24 hours. There is another belief attached to this place that the Neem tree standing to the North of the Shani idol sheds its branches if one happens to cast a shadow over the idol. Shiridi is another major pilgrim center of Maharashtra and India, which is very close to Shani-Shingnapur.