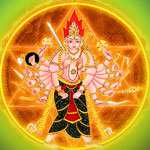 The Sudarshana Chakra is the whirling disk-like weapon used by Lord Vishnu. The Puranas state that the Sudarshana Chakra is the most powerful weapon that can annihilate the strongest of enemies. It is believed to slay the enemies of law, order and conservation in the form of asuras, rakshasas and vikrutatma. The divine Chakra ends sins, practitioners of evil and sorrows of all sorts and dimensions.

The word Sudarshana is inclusive of two Sanskrit words, Su that means good or divine and Darshana means vision. Sudarshana Chakra is the only known celestial weapon that is mobile. It is the cosmic weapon of the Supreme Godhead, Lord Vishnu. It is believed that Sudarshana Chakra was presented by Lord Shiva to Lord Vishnu in recognition of His devotion. The legend goes that when the atrocities that the asuras were wreaking upon the Gods became too much to bear, Lord Vishnu was consulted. The Gods wanted Him to find out the way to destroy the sufferings, but since He did possess enough power, He decided to take the help of Lord Shiva, for which He set out to meet Him.

When Lord Vishnu went to Lord Shiva, He was in deep meditation. Lord Vishnu thought it inappropriate to disturb His trance, so He waited and began praying to Him earnestly. Moments turned into days and days turned into years that passed with Lord Vishnu meditating on Lord Shiva, chanting His name and waiting for Him to open His eyes. Everyday He would gather a thousand lotus blossoms and offer to Lord Shiva and chant His name.

The evil attacks of the asuras targeting the Gods were going on in full swing. Lord Vishnu felt powerless before the circumstances as there was no way that He could interrupt the meditation of Lord Shiva. His patience and efforts finally paid as one day Lord Shiva finally opened His eyes. Lord Vishnu was overjoyed. He began offering one thousand lotus blossoms to Lord Shiva but He soon realized that he was running short of one. Actually, Lord Shiva had hidden one flower to see what He'd do. Lord Vishnu devotedly plucked out one eye and offered it in place of the flower.

Lord Shiva was overcome with emotions on seeing His devotion, so He told Him that He could ask for any boon and He'd grant it. Lord Vishnu appealed to be bestowed with a weapon that'd help defeat the asuras. So Lord Shiva gave the Sudarshana Chakra to Lord Vishnu and assured Him that it had the power to destroy all the enemies.

Sudarshana Chakra is also seen in the hands of Lord Krishna, His eighth avatara whom He eventually it passed on. Lord Krishna could use it whenever he needed to, which He did to destroy evil beings. It is interesting to note, however, that Shri Krishna did not use it a single time in the Mahabharata. Sri Chaitanya used it too on demons, which scared them enough to beg for forgiveness and mercy.

Another Sudarshana Chakra legend that is recounted is the one in which Viswakarma, the architect of Gods diminished the shine of Surya, the Sun God. Viswakarma's daughter was married to Surya, but could not go near Him as it was difficult to endure His scorching brilliance and heat. So Viswakarma had to reduce the intensity of the Sun. As a result, Viswakarma then incised part of the sun's brilliance and used dust of the rays create some celestial objects, one of which was the spinning disc of Vishnu.

The divine and all-powerful Chakra is not used as an ordinary weapon. It is not thrown but traverses towards enemies with will-power. The chakra is round and bears spikes of arrows circling its frame. It is more than just a physical instrument; it possesses the greatest spiritual authority to devastate everything. It revolves very fast after being sent by the mental will to target the evil doer and in the end comes back to the owner.

Apart from destroying the evil, noble attributes like knowledge, stability, vision beyond the samsara and upholding the righteous are also associated with the powers of Sudarshana Chakra.

Meaning:
Om. I appeal to be allowed to meditate upon the holy discus of Sudarshana. That will holds profound brilliance, bless me with intellect and illuminate my mind"