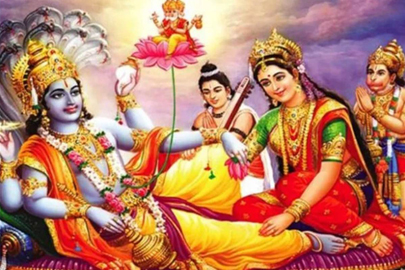 The Hindu Lunar calendar is divided into two different cycles/phases of the Moon. One phase is that of the waxing Moon which is known as 'Shukla Paksha', in which phase the Moon grows in size (visually) and brightness everyday bit by bit and the other phase is that of the waning moon, Krishna Paksha, when the brightness of Moon diminishes in size everyday post the Full Moon. Each phase is of 15 days respectively. 'Ekadashi' is the eleventh (11th) day in each phase of the Moon, which means that there are two Ekadashis in a month. The term Ekadashi means the eleventh lunar day (Tithi) in each fortnight of the Shukla Paksha and the Krishna Paksha respectively.

To further explain the term 'Tithi' (as per the Hindu calendar), it means one Lunar day which means the time it takes for the Moon to travel a certain distance. So Ekadashi is the 11th Lunar day or Tithi. In the Shukla Paksha i.e. the brighter phase of the Moon, on Ekadashi, the Moon looks three fourth (3/4th) and in the Krishna Paksha Ekadashi, the Moon appears three fourth (3/4th) dark. There are 24 Ekadashis in a year, except for Leap year when there are 26 Ekadashis.

Along with Hinduism, Jainism too considers Ekadashis to be holy, which has spiritual connotations. It is said that merely by hearing the names of the various Ekadashis one will be free of all sins. Lord Vishnu is worshipped on Ekadashi. The day is observed by fasting from Sunrise of Ekadashi Tithi to the sunrise of the following day. Fasting on the Ekadashi is an important ritual of this day. The best form of fasting for Ekadashi is to go without water or food. People who do not want to keep a full fast are recommended to have a fruit-based diet (Phalahar) or fruit and Milk/milk product diet. Consumption of Rice, Grains and Beans are prohibited on this day.

According to the Hindu Lunar calendar, the Utpanna Ekadashi is in the waning Moon phase or Krishna Paksha, in the early part of winter, Margasirsha/ Margasira month which falls in November-December.

On Utpanna Ekadashi observing fast is the most important thing. In the ancient Hindu text, the Bhavisya Uttara Purana, the importance of fasting on this Ekadashi has been mentioned clearly. The ancient text has Lord Krishna explaining to Yudhisthira about the importance where the Lord has said it is greater than all sacrifices or charity to the needy or the sacrifice of Horses (Ashvamedha) or even seeing Lord Vishnu Himself. It is said that one who observes fast on this day, adhering to the rules, will be liberated and get a place in Lord Vishnu's abode.

When Yudhisthira asks Lord Krishna how fasting on Ekadashi can be so significant that it surpasses the best of acts by human beings, the Lord narrates the story of Utpanna Ekadashi and its significance.

The narration says that once in Satya-Yuga there was a ferocious demon called Mura who was very violent and angry. He terrorized the Demigods and defeated Lord Indra (the King of Heaven), the Sun God (also known as Vivasvan), Agni (fire God), Vayu (the God of Wind), the eight Vasus and Lord Brahma.

In this situation, Lord Indra approached Lord Shiva who asked them to go to Lord Vishnu, the preserver of all creation and ask for the solution.

Lord Indra and the other Gods narrated to Lord Vishnu about the demon Mura, their plight and how they have all lost their Heavenly position and with folded hands pleaded with Lord Vishnu to save them and kill Mura. Lord Vishnu took action immediately and asked them all to proceed to the demon Mura's capital city, Chandravati, from where the demon operated.

At Chandravati, the roaring demons attacked the Demigods fiercely with their shining weapons. The attack was so severe that the Demigods could not resist it and took flight from the battlefield. Seeing Lord Hrishikesha/Vishnu, the demons raised their weapons and charged to attack Him. Lord Vishnu pierced their limbs with His poisonous arrows, thereby putting an end to hundreds of demons at one strike.

Mura then came face to face with Lord Vishnu. All the Lord's weapons failed to have any effect on Mura, who had mystical powers to protect him. Seeing His weapons failing, Lord Vishnu decided to wrestle with Mura with His very powerful hands and this wrestling is said to have continued for one thousand celestial years but Mura could not be killed or defeated.

It is said that Lord Vishnu was tired and fatigued by this time and left for Badarikashrama, where He found a cave which was called Himavati. The cave had only one entrance and was ninety-six miles in diameter. Lord Vishnu fell asleep in the cave but the demon Mura found Him out and thought He would kill the sleeping Hari (Lord Vishnu). Mura was all prepared to take action but precisely at that time from Vishnuji's body, a young girl manifested with many shining weapons and a bright complexion. She challenged Mura to fight with Her. Mura was astonished to see how powerfully and deftly the girl fought him and wondered whose creation She was? The radiant young girl shattered all weapons of Mura in a surprise strike and before the demon could gather his wits, She had taken away his chariot. Without any weapon left, Mura charged towards Her intending to kill Her with his bare hands. Seeing Mura charging towards Her, with one clean sweep She beheaded Mura, putting an end to the evil demon.

When Lord Vishnu woke up from His sleep, He was surprised to see the maiden bowing down to Him with folded hands and the demon lying dead. Lord Vishnu asked Her who had killed the demon, to which She replied saying She did, as Mura wanted to kill the Lord while He was asleep. The Lord expressed His surprise at Her power and asked Her who she was. The young girl then revealed that She was a manifestation of His transcendental self, and was Maha-Shakti, the Lord's immense internal power. Lord Vishnu was extremely pleased with this form of Shakti and asked Her to ask for any boon.

The maiden then asked the Lord for a boon which was that any human being who keeps a fast on that day of Her first appearance, his/her sins will be absolved. That if the person fasts through the day abstaining from eating anything or drinking water, with control on all senses and urges, then that person should be bestowed with the blessings of gaining a place in Lord Vishnu's abode for one billion kalpas after the person has led a prosperous, happy and abundant life. The one who would have a meal in the evening, without the inclusion of grains or beans, should be granted half the credit of the merits of keeping the fast for the day. The one who has a midday meal should be granted half of the advantage of the previous. Also, the maiden requested the Lord to grant anyone who fasts that day, whether in full or by having a midday or evening meal, with blessings of spiritual and religious qualities, wealth and salvation.

Lord Vishnu readily agreed to bless the young girl with the boon she had asked for by saying that all His devotees who keep fast on the day that the young girl had appeared will be blessed with the merits. The Lord also named the young maiden Ekadashi, Her day of the first appearance was on the eleventh day of the waning Moon. The Lord promised that the sins of the person will be absolved if he/she fasts on Ekadashi and will ultimately get a place in His transcendental abode. Lord Vishnu also specified that along with His other favourite days of the waxing and waning Moon, like the Ashtami (eighth day), Tritiya (third day) etc., Ekadashi will also be included and fasting on Ekadashi will bring the blessings more than any other fasts or sacrifices made.

The rituals of Utpanna Ekadashi are specified in the ancient Hindu texts and are said to have been specified by Lord Sri Krishna while answering Yudhishthira's (one of the Pandava brothers from Mahabharata) query. The rituals are:

1) One day before Utpanna Ekadashi, which is the 10th day of the Krishna Paksha, the person should clean his/her teeth thoroughly in the afternoon and have supper at Sunset hour.
2) On the morning of Utpanna Ekadashi, the person should intend on keeping the fast meticulously. The person should have a bath in a river (which is said to be most purifying) or a lake and in both not being available, bathe with pond water.
3) While bathing the person should smear mud on his/her body with chanting a prayer to Mother Earth.
The prayer - O Asvakrante! O Rathakrante! O Vishnukrante! O Vasundhare! O Mrttike! (O Mother Earth! please remove all my sins accumulated from past lives so that I may enter the abode of the Lord Vishnu the Supreme Lord)
4) Worship Lord Govinda with complete dedication and Offer an excellent 'Bhog' (food to Divine) along with flowers and other things of the offering.
5) Light a lamp at home in honour of the Lord
6) Chant or sing praises of Lord Vishnu throughout the day and remain in a most blissful state during the fast.
7) Stay awake through the night in full consciousness. If possible play musical instruments throughout the night to please the Lord.
8) The next morning the person should give charity to Brahmanas and respectfully ask them for forgiveness for any offence.
9) For people who keep a complete fast till the next day, one should say the prayer - "O Pundarikaksha, O lotus-eyed Lord, now I will eat. Please shelter me".
10) After the prayer the devotee should offer flowers and water at the lotus feet of Lord Vishnu and request the Lord to eat by chanting the mantra of eight-syllable, thrice. To garner the full merits of the fast, the devotee should have water which has been offered to the Lord.
11) Fire sacrifices can be performed if the devotee chooses to do so.