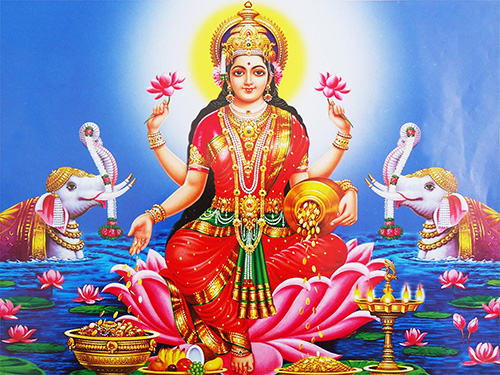 One of the most auspicious and divine forms of Goddess Lakshmi is Goddess Varalakshmi. Lakshmi Varalakshmi are both the same. The word ‘Varalakshmi’ is derived from two Sanskrit words where ‘Vara’ means boon and ‘Lakshmi’ means wealth. Thus, Varalakshmi Mata is the goddess who when appeased, blesses Her devotees with the boons they wish for.


When is Varalakshmi Vratham in 2022? When is Varamahalakshmi festival?

This year the Varalakshmi Vratham 2022 will fall on the 12th August 2022 Friday.

The Varalakshmi Vratham Katha is one of the most interesting chapters that celebrate Goodess Lakshmi in Her Varalakshmi form. Let us take a look at the Varalakshmi Vrat Katha. There was a town named Kundinagaram which was known for its scenic beauty. This town was situated in the Vidarbha Kingdom. In the prosperous and beautiful town of Kundinagram town there lived a woman named Charumathi along with her husband and family. Charumathi was a God fearing woman and was completely devoted to her family. She would also indulge in prayer and worship of Maa Lakshmi with a pure heart. Looking at Charumathi’s devotion Goddess Adilakshmi was please and visited Charumathi in her dreams and instructed her to perform the Varalakshmi Vrata with utmost devotion so that all her wishes would fulfil. Soon after that Adilakshmi disappeared. Charumathi woke up from her sleep and narrated the entire dream to her husband and soon the news spreads to the neighbouring houses. The next day Charumathi along with the other married neighbouring women wake up early and take bath and start building a mandapa “a temple porch” where they were to perform the Varalakshmi Puja. All the women along with Chaturmathi participated in this pooja with a pure heart and complete devotion. Chaturmathi also recited a shloka which is as followings

Once she recited this shloka, she tied the nine threads known as Thoranam on her right wrist and offered sweets as Naivedyam to Varalaksmi Mata. When Charumathi completed the first procedure of prayer and worship she was blessed with certain ornaments.

When She completed the next stage of prayers, she was again rewarded by Goddess Lakshmi with navaratna kankanams

And finally when the entire pooja process of Varalakshmi Vratam was devotedly performed by Charumathi and fellow women they all were blessed with enormous wealth.

Once the puja was done, Charumathi offered Tambulam to the brahmin priests. She then distributed the Prasad of the Varalakshmi Vrat amongst relatives and led a happy and contented life. Since then, the Varalakshmi Vrata came to be performed by Hindu women across South India.

Why do we celebrate Varamahalakshmi festival?

The Varalakshmi Vrat or the Pooja is popularly celebrated in South Indian states namely, Andhra Pradesh, Tamilnadu and Karnataka. This Vrat is not so popular in North Indian states but it is celebrated in the states like Maharashtra and Orissa. On this day, married women observe fast for an entire day and perform the ‘Varalakshmi Pooja’ asking the goddess to bless their husband with good health and longevity. A few newly married women or women who do not have children also pray to the goddess to bless them with an offspring and pray for the well-being of the entire family.

how to do varalakshmi pooja / Varamahalakshmi Pooja Vidhanam (Procedure)

The preparations for celebrating the Varalakshmi Pooja Vidhi begins a day prior to the actual day that is on a Thursday. Women get up early on a Thursday morning and clean all the pooja vessels along with the Kalash (pot). Oil the lamps and keep them aside, make Thoran and Pongu Nool as mentioned above along with Kumkum and arrange the Puja plate and keep this entire samagri ready for the next day pooja of Varalakshmi Vrata.

On a Thursday evening at around 5.30 pm, clean the entrance of all the rooms in your house by sweeping and mopping the floor. Once you have done cleaning, apply two lines of Kumkum and one line of turmeric on each corner sides of the entrance. Now apply Chandan and Kumkum dots on these lines. Now light a lamp and offer some neivedyam. Now place the wooden plank in front of Maa Varalakshmi’s idol or picture and place a banana leaf over it and spread a handful of raw full grain rice over it. Keep all this ready for the next day Vrat. This above procedure is the pre-preparation of the festival that is going to fall on the next day aka Friday. The Varalakshmi Vrata is performed to welcome Goddess Lakshmi into our homes and to bless our family with abundance, good health, wealth, longevity and progeny.

Note: Do not place the aromatic water filled Kalash on a Thursday evening as it is supposed to be placed on the Friday during the actual pooja timings only.

How to do/perform Varalakshmi Vratham?

This is how you must perform the Lakshmi Vratham Pooja at home. 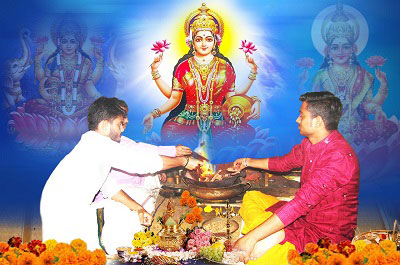 Goddess Lakshmi epitomizes wealth, prosperity, auspiciousness, abundance and fortune. Performing this puja on Varamahalakshmi Vrata or Varalakshmi Nombu is one of the best spiritual activities to attract the grace of Lakshmi ji. She emerged during the Samudra Manthan (churning of the oceans). She is the consort of Lord Vishnu, epitomizing the importance of economic activity for maintenance of life. She is worshipped for blessings of fertility, fortune, purity, beauty, power, generosity, auspiciousness, grace, grandeur, bliss and riches. 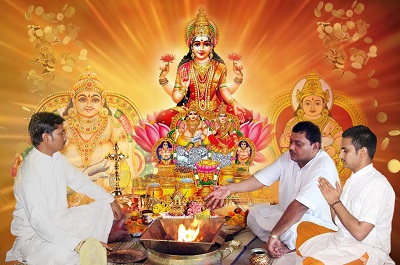 Perform this Lakshmi Kuber Puja and Yajna on Varalakshmi Vratam to attract the divine grace of Goddess Lakshmi. While Goddess Lakshmi represents auspiciousness, fortune and prosperity, Lord Kubera is the treasurer of material wealth. This Puja is best for those seeking to acquire material growth and prosperity in their profession. This Puja eliminates all the barriers that come on your way of accumulating wealth and money. The Gods of wealth shower on you their blessings along with prosperity. The Laxmi Kuber puja is performed together to obtain the prosperity and drawing new opportunities and sources of income on the festival of Varalakshmi. In the Shiva Purana, it is mentioned that Lord Shiva made Lord Kuber the Lord of wealth after the later performed hard penance to please Shiva. Worshipping Goddess Laxmi and Lord Kuber together is highly beneficial and leads to , financial gains, fortune and economic prosperity. 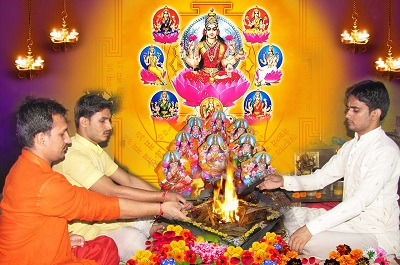 Ashta Lakshmi collectively the the eight divine forms and aspects of Goddess Lakshmi. Ashta Lakshmi signifies eight different manifestations of wealth. Worshipping and performing puja for Ashta Lakshmi on this special festival helps you attract all the forms of wealth. Goddess Ashta Lakshmi is worshipped to attain wealth, both material and spiritual prosperity and abundance. 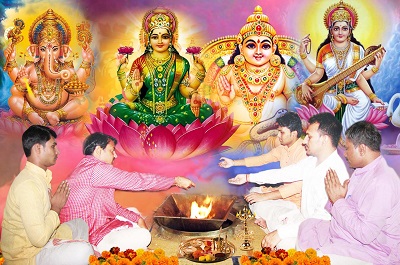 How to Pray To Goddess Lakshmi in Varalakshmi Vratam:

There are two ways to worship Goddess Lakshmi; everyday prayers and special puja on occasions such as Dhanteras and Diwali.
Everyday prayer includes burning the incense sticks, lighting up an oil lamp and offering one’s obeisance to Her. It is best to use Kamalgata mala and Sphatik mala for chanting and Rose and Lotus flower for offering to Her. One can also use Rudraksha Bead (Seven Mukhi) to chant the mantras. A Seven Mukhi Rudraksha bead is ruled by Goddess Mahalakshmi. Therefore it is highly auspicious to chant the Lakshmi mantras on a mala of Seven Mukhi Rudraksha beads.

One could also chant the following simple mantras on the beads while praying to her: