One of the most precious bonds of love is the bond that siblings share. We all have grown up learning how to share and care for our siblings and how to always stand strong by each other and protect each other during difficult times, isn’t it?

Also through our growing years, we have been listening to the stories about sibling bonding through books which were fiction based and through religious books and Vedas that mentioned the true affection and bonding between the Gods and their siblings. This bond of affection, care and love is called ‘Bhai Dooj’.

What is Bhai Dooj? Why Bhai Dooj is celebrated? Bhai Dooj meaning

The special bond between brothers and sisters that have always been cherished and celebrated across the country is called ‘Bhai Dooj’. The meaning of Bhai Dooj is as follows. The word ‘Bhai’ means brother and the word ‘Dooj’ means the second day after the new moon, which is the day this festival is celebrated. Bhai Dooj marks the end of the five-day-long Diwali celebrations which generally falls on the second day after the new moon or Amavasya of the Shukla Paksha in the Hindu month of Kartik. On this day, sisters apply a vermillion/kumkum tilak on their brothers’ forehead and pray for their well-being and long life and in return, the brothers offer them gifts. The Bhai Dooj festival is known by many names across the country. In West Bengal it is called ‘Bhai Phota’, in Maharashtra and in Goa is called ‘Bhau Beej’, in Bihar and Uttar Pradesh it is known as ‘Bhai Tika’ and in Nepal, it is known as ‘Bhai Tihar’.

When is Bhai Dooj?

This year the Bhai Dooj festival will fall on November 6, 2021 which is a Saturday. 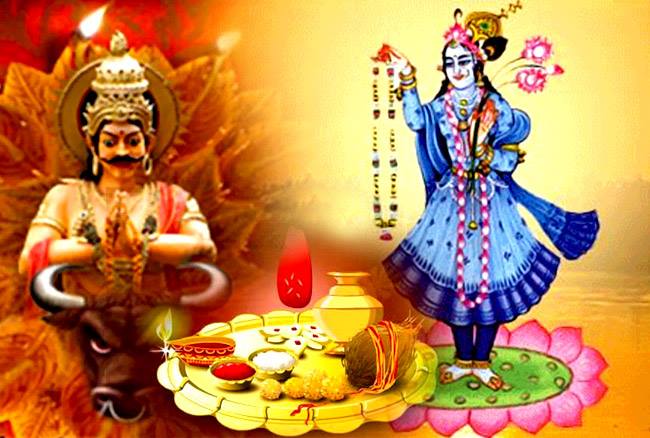 The Bhai Dooj history dates back to the Vedic period where deities shared a beautiful bond of sibling love with their sisters. Bhai Dooj significance has been quoted in various ancient Scriptures. There are many legends associated with its story. One of which is the famous story of Lord Yamraj and His sister Yamuna. It so happened that, Yamuna and Yama were twin siblings, Yamuna shared a close bond of love with Yamraj and it had been a long time since the two met. Yamuna is also known as Yami longed to see Her brother and wished that He would visit Her soon. Her prayers were answered and Yama visited Yami on the second day after the new moon day. Yamuna was happy and fed food to Lord Yamaraj with her own hands after the meal she applied a Tilak on His forehead and prayed for His long life. Overwhelmed by this gesture Yamaraj was touched and He asked His sister for a boon on which she replied stating that she wants Him (Yamaraj) to visit her every year and an individual whose sister applies Tilak on his forehead is must not fear death or Lord Yamaraj. Hearing such a beautiful wish Yamaraja was appeased and He granted her the boon. Since then the ritual of applying tilak on the forehead of the brother and praying for his longevity has become an integral part of Hinduism and is being celebrated even today as a festival all over the country.

Another story is that of Lord Krishna and his sister Subhadra. Once so happened, that Lord Krishna defeated demon Narkasur in the battlefield. On returning home, He (Lord Krishna) was warmly welcomed by His sister. She lit ghee diyas and made flower decorations to celebrate His victory. She then applied Tilak on His forehead and prayed for His long life. From that day onwards, it has become a ritual that sisters apply ‘Tilak’ on the forehead of their brothers and in return, the brothers offer gifts and sweets to the sisters. Now that we know the importance of Bhai Dooj let us now look at the how-to-do Bhai Dooj pooja.

This divine day is the perfect time where siblings get together and perform the Bhai Dooj festival together thus, strengthening the bond of togetherness and care. Traditionally, since ages on the occasion of Bhai Dooj a brother visits his sister’s house and the sister then performs the tilak ceremony and prays for his long life. After the ceremony, she feeds him sweets and savouries. The brother in return surprises her with gifts and sweets. After this ceremony followed by an exchange of gifts and get on this particular day, the brothers visit their sister's home and the ceremony begins with an Aarti. A tradition is followed on Bhai Dooj where the coconuts are also worshipped and presented to the brother by the sister. The sister then goes on to apply tilak on her brother's forehead and feed him handmade tasty savouries. She also gives her brother blessings for long and content life. As mentioned earlier, this is followed by the exchange of gifts between the brothers and sisters. This festival is quite similar to the festival of Raksha Bandhan. The festival of Bhai Dooj also gives a chance to family members and relatives to meet each other and spend some great time together till their heart is content.

The hallmark of Bhai Dooj is the ceremonial tilak and aarti that the sister does for her brother.

NOTE: If a woman does not have a brother, she worships and offers prayers to Chandra, the Moon-god. If your brother stays far away making it impossible for you to visit him, you can still pray to the Moon-god for his long life.

When you are looking for Bhai Dooj gifts, try to find something your sister will need and will appreciate. It could be spiritual items that attract love, harmony and good luck in the house and energize her surroundings. The spirit of Bhai Dooj is all about strengthening family ties and relationships in modern fast-paced life. So enjoy this day with your loved ones and let them know that you care for them.

The festivals of Bhai Dooj and Rakshabandhan are quite similar to each other. On the occasion of Bhai Dooj, the brother visits the house of his sister and the ceremony begins by performing an Aarti, on this day the sister also offers prayers and offerings to the coconut and gifts the coconut to the brother. Post this ritual, the Tilak ceremony is performed. After the tilak ceremony, the sister feeds sweets to her brother and then the brother offers her gift in return. Whereas, in Rakshabandhan, the sister visits the brother and as mentioned above performs aarti and then ties a Holy thread called Rakhi on the right wrist of her brother and in return the brother gives her a gift in return.