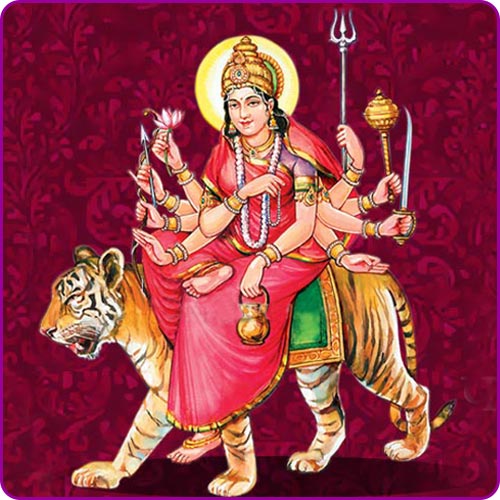 Chandraghanta is the third form of Goddess Durga and is worshiped on the third day in Navratri 2022. Those who worship Devi in this form get eternal power and strength. She is the Goddess of Manipura Chakra located on the Navel which is ruled by Sun.

Although Parvati was determined to have Lord Shiva as Her husband, Shiva told Her that He will not marry anyone and remain celibate. Upon hearing this bitter truth, She suffered like hell in pursuit of marrying Shiva. Seeing Her sufferings, Lord Shiva gave in to Her demand and agreed to marry Her.

Shiva along with other gods, sages, ascetics, ghosts and other spiritualists arrived at the palace of King Himavat, father of Parvati and the ruler of Himalaya. There Shiva displayed His terrible as a part of His eternal pastimes. Seeing such ghastly form Menavati, Parvati’s mother, fainted. Soon, Paravati assumed the form of Goddess Chandraghanta which startled everyone including Shiva.

She prayed to Shiva that He return to His charming, calm form. Upon Her request, Shiva turned into a young charming man. Menavati by the grace of Shiva returned to her senses and became pleased to her daughter’s divine marriage ceremony.

Devi Chandraghanta is one who establishes justice and discipline in the world. The color of her body is golden; she rides on the lion that represents "dharma"; possesses ten hands and three eyes; eight of Her hands display weapons while the remaining two are respectively in the mudras of boon giving and stopping harm. Devi Maa is posed as if to be ready for war. "Chandra Ghanta" means supreme bliss and knowledge, showering peace and serenity, like cool breeze in a moonlit night. By Her blessings the sorrows are dispelled and the warrior within is evoked.

On the third day of Navaratri, the mind of the sadhak enters Manipura Chakra. He develops foresight and power of leadership. By the grace of Mother Chandraghanta all sins of the sadhak are burnt and obstacles removed. Her worship is instantly fruitful. She is always in a gesture as if ready to proceed for the battlefield and thus she removes the difficulties of devotees very promptly. Her vehicle is lion and so her worshiper becomes valorous and fearless like a lion. The sound of her bell always protects her devotees from evil spirit.

Goddess Chandraghanta is the married form of Parvati. Goddess Mahagauri was married to Lord Shiva and started applying half Chandra on Her forehead because of which She is referred to as Chandraghanta. She is worshipped third on Navratri. This manifestation of Parvati is peace loving and blesses Her devotees with welfare. She is also ready for war with all Her weapons. Her devotees believe that the sound of the moon bell on Her forehead dispels negativity and evil spirits away.

The vahana of the Goddess is tigress. She adorns the Chandra in a semi-circular shape on Her forehead. The half-Moon looks like the shape of the bell (Ghanta), and hence the name Chandraghanta. She is shown with 10 hands. Her left hands carry Trishul, Gada, Sword and Kamandal and Her right hands holds the lotus flower, Arrow, Dhanush and Japa Mala. Her fifth left hand is in Varada Mudra and Her fifth right hand is in the Abhaya Mudra. The third night of Navratri begins with worship of Chandraghanta which is performed by using sacred puja. The devotee uses a shallow pan like utensil made of clay as base. Three layers of mud and Sapta Dhanya/Navadhanya (grains) seeds are poured into the pan. The next is a little water is sprinkled so that seeds get enough moisture. A Kalasha (holy water pot) filled with Ganga jal, Supari, a few coins, Akshat (raw rice mixed with turmeric powder) and Durva grass is placed in the base. Then the five Mango tree leaves put around the neck of the Kalash which is then covered by a coconut.