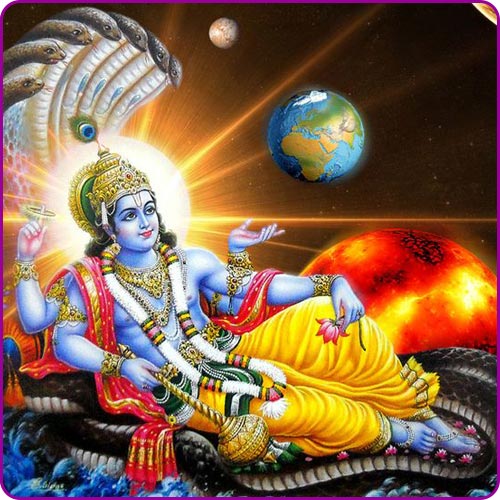 The day of Ekadashi is very significant for the Hindus, as it is a day when devotees observe a strict fast or Vrat and spend the day worshipping and singing praises of Lord Vishnu/Hari. Lord Krishna, Himself has told about the merits of observing fast on Ekadashi.

There are two Ekadashis in each month. There are two different cycles of Moon in a month, each of 15 days, as per the Hindu Lunar calendar. One phase is that of the waxing Moon which is known as 'Shukla Paksha', in which phase the Moon grows in size(visually) and brightness of the night sky increases everyday and the other phase is that of the waning moon, Krishna Paksha when the brightness of Moon diminishes everyday post the Full Moon. The holy day of Ekadashi falls on the 11th day of Shukla Paksha and the Krishna Paksha respectively.

It is said to please Lord Vishnu when devotees fast on this day by following all the rules meticulously and in return the Divine Lord blesses with good health, wealth, prosperity and all-round happiness.

According to the ancient texts both the Ekadashis, whether in Shukla Paksha or Krishna Paksha, are equally holy and auspicious as they have the same Tithi.

The Devshayani Ekadashi means- 'Dev' means God and 'shayani' means sleeping, so compounded it means God sleeping. The name Devshayani is apt for this Ekadashi as it is believed that on this day Lord Vishnu goes to sleep in 'Ksheersagar'(the cosmic ocean of milk) on a bed made of His coiled serpent/snake, Sheshnag. From the day of Devshayani Ekadashi, the Supreme Lord Vishnu is said to sleep for 4 months, which is known as 'Chaturmas' and wakes up in the Hindu month of Kartik(October-November) on Prabodhini Ekadashi/ Devotthani Ekadashi.

Devotees keep fast on Devshayani Ekadashi starting from Sunrise of the day to the Sunrise of Dwadashi, which is the next day.

Those who observe the fast must break it after sunrise the next day of Ekadashi. It is to be noted that one should break the fast (Parana) within Dwadashi Tithi. Dwadashi ends at 6:56 PM on 21st July. Another important consideration is that one must not break the fast during Hari Vasara which is the fourth duration of Dwadashi. The best time to break the fast is pratah kala (morning).
Book Now Ekadashi Puja

By observing fast on Devshayani Ekadashi sins of the devotee are nullified and the devotee earns the merit to lead a happy, fulfilling life, is liberated and blessed with a place in the abode of Lord Vishnu after the soul transcends.

Lord Sri Krishna has mentioned that even hearing or reading about the Devshayani Ekadashi or the Vrat Katha washes away the sins of the devotee.

Devsahayani Gyaras/Ekadashi is a very significant Ekadashi for all devotees of Lord Vishnu and especially for the Vaishnava community who observe the Devshayani Ekadashi by observing fast/vrat and follow meticulously all other rules of this auspicious Ekadashi. As per the Hindus, in the Chaturmas ('chatur' means four and 'mas' means months), auspicious occasions, like weddings etc. are not supposed to be held as Lord Sri Hari and the Devas are asleep during these months. The Chaturmas is also the monsoon season in India. Devotees also observe all Ekadashi fasts during the Chaturmas and avoid onion, garlic, grains and beans during this time.

Another significant religious event is the well known Pandharpur Yatra. Pandharpur in the Maharashtra state of India houses the much revered and famous Lord Vitthala/Vithoba temple, where on the auspicious day of Devshayani Ekadashi thousands of devotees come from all over Maharashtra to pay their obscene to Lord Vitthala and Goddess Rukmini(consort of Lord Vitthala). The devotees travel in processions, on foot, from various cities and towns for days and the 'yatra' ends when they get to pray to the idol of Lord Vitthala in the Vithoba temple.

King Mandhata was a Suryavanshi who was pure, religious, understanding, caring about all the people in his kingdom and was an efficient King. King Mandhata was blessed with a kingdom of wealthy citizens and also there were no diseases, drought or such other things in the kingdom. However, once King Mandhata's kingdom was afflicted with a severe drought of three years. The citizens were in a miserable state with no crops or food grains. Performing a ritual of sacrifice to bring in the rains was also not possible.

The citizens approached their kind King and expressed their grievances and requested him for help. The situation was upsetting for King Mandhata and he set out in search of a wise Sage who would be able to guide him to a solution. While wandering across the forests in search, he met the Rishi Angira, the great sage. The King asked Rishi Angira for a solution to the dismal situation in his kingdom. He also asked Angira Rishi why such a drought has taken place in his kingdom even though he was following the Vedic way of life, was religious and so were the subjects of his kingdom.

Sage Angira told King Mandhata that penance and austerities in the Satya Yuga were allowed to be performed by twice-born Brahmins and that the cause of the terrible draught is a Sudra(person not initiated) who is performing some penance which was unlawful. Angira Rishi advises the king to find Sudra and punish him with death. However, King Mandhata refused to do so saying that he will not kill an innocent person who was not at fault in performing penance and requested the Rishi Angira for a religious solution. The great Sage told the King to observe fast on Devshayani Ekadashi by following all the rules, which will please Lord Vishnu who will bless with rains in his kingdom to put an end to the drought. Sage Angira also told King Mandhata to ask all the citizens of his kingdom to observe the Devshayani Ekadashi vrat/fast.

King Mandhata was happy to get a solution and he and the people of his kingdom observed the Devshayani Ekadashi vrat strictly and by the grace of Lord Vishnu, it rained sufficiently bringing back happiness to King Mandhata's kingdom.

What to do on Devshayani Ekadashi 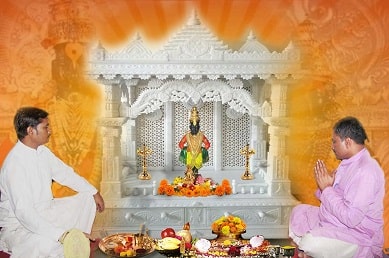 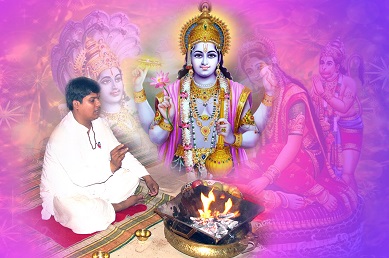 The rituals of Devshayani Ekadashi are specified in the ancient Hindu texts and are said to have been specified by Lord Sri Krishna while answering Yudhishthira's (eldest of Pandava brothers from Mahabharata) query.

On Devshayani Gyaras/Ekadashi visiting a Vishnu-Lakshmi temple is recommended to offer prayers. If not possible then worship at home with sincerity and pure intentions. 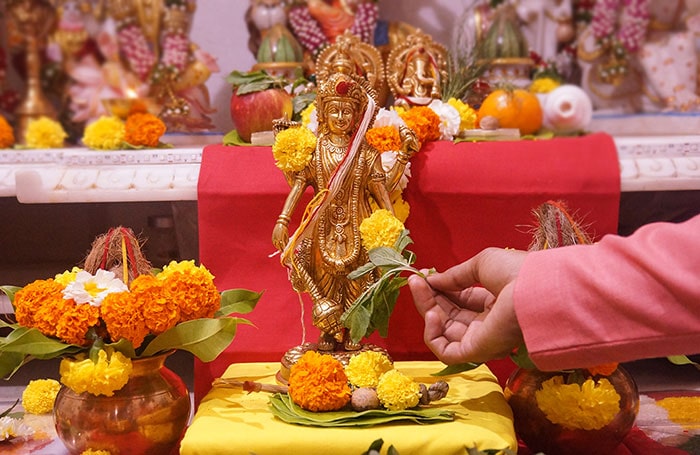 The Devshayani Ekadashi Vrat Vidhi are:
1) One day before Devshayani Ekadashi, which is the 10th day of the Krishna Paksha, the person should clean his/her teeth thoroughly in the afternoon and have supper at Sunset hour.
2) On the morning of Devshayani Ekadashi, the person should intend on keeping the fast meticulously. The person should have a bath in a river (which is said to be most purifying) or a lake and in both not being available, bathe with pond water. 3) While bathing the person should smear mud on his/her body with chanting a prayer to Mother Earth.
The prayer - O Asvakrante! O Rathakrante! O Vishnukrante! O Vasundhare! O Mrttike!
(O Mother Earth! please remove all my sins accumulated from past lives so that I may enter the abode of the Lord Vishnu the Supreme Lord)
4) Worship Lord Govinda with complete dedication and Offer an excellent 'Bhog' (food to Divine) along with flowers, Sandalwood paste, Tulsi leaves, dhoop and other things of the offering.
5) Light a Ghee lamp at home in honour of the Lord.
6) Chant or sing praises of Lord Vishnu throughout the day and remain in a most blissful state during the fast.
7) Stay awake through the night in full consciousness. If possible play musical instruments throughout the night to please the Lord.
8) The next morning the person should give charity to Brahmanas and respectfully ask them for forgiveness for any offence.
9) For people who keep a complete fast till the next day, one should say the prayer - "O Pundarikaksha, O lotus-eyed Lord, now I will eat. Please shelter me".
10) After the prayer the devotee should offer flowers and water at the lotus feet of Lord Vishnu and request the Lord to eat by chanting the mantra of eight-syllable, thrice. To garner the full merits of the fast, the devotee should have water which has been offered to the Lord.
11) Fire sacrifices can be performed if the devotee chooses to do so

The day of Ekadashi till the next morning the devotee should involve in taking baths, singing and chanting praises of the Lord Vishnu and worship Him with complete devotion, involve in activities of devotion and doing charity. Keep your thoughts pure and positive.

Meaning: I offer my obeisance to or bow down to Lord Vasudeva or Lord Krishna.
This powerful mantra was given by Sage Narada to Dhruva Maharaja as described in the Bhagavat Purana (4.8.54).

3) On Tulsi Beads jaap mala you can chant the Hare Krishna mantra.
4) Chanting the Vishnu Sahasranama and stotram. The Vishnu Sahasranama has the power to purify the mind, body and soul. This can also hear it in the morning while doing daily chores. The vibrations cleanse the energy of the house too.

On this day wearing the Ten Mukhi, a Seven Mukhi or a Nineteen Mukhi Rudraksha beads for they are ruled by Lord Krishna, Goddess Lakshmi and Narayana, respectively is highly beneficial. These Rudrakshas purifies the inner self and strengthens will power.