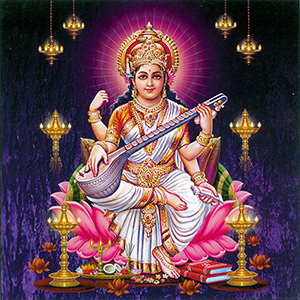 Worship of Goddess Saraswati Mata on the 7th Day of Navratri

In the Vedic scriptures, Goddess Saraswati is the Goddess of Learning, Wisdom, Knowledge, Music, Arts and Skills. In Sanskrit, Saraswati means “the essence of the self”. Goddess Saraswati is the consort of Lord Brahma, and hence, source of all knowledge herself. Since knowledge is necessary for creation, Saraswati symbolizes the creative power of Brahma. She is a beautiful goddess being elegant, graceful and glowing with the light of knowledge. Sarasvati’ is made of surasa-vati. It means the one who with plenty of water. Just like dirt and filth in a river get swept away with the flow of waters, ignorance in the mind gets swept away with knowledge and wisdom represented by Goddess Sarswati.

After Lord Brahma created the cosmic universe, he realized that it lacked forms, concepts and orders. He felt lost and needed assistance to organize the Universe. He decided to create the very embodiment of knowledge to help him with this Herculean task, and from his mouth emerged the Goddess Saraswati. She gave him direction on how to create order in the cosmos, as we know it. The sun, the moon, and the stars were born. The oceans emerged and seasons changed. The joyous Brahma then named Saraswati - Vagdevi, the goddess of speech and sound. Thus Brahma became the creator of the world with Saraswati as his source of wisdom. She is often worshipped by the knower of Vedas, the seers and the inquisitive students. She is the river of consciousness that enlivens creation; being the dawn-goddess whose rays dispel the darkness of ignorance.

Goddess Saraswati is also known as Gayatri, which is where the Gayatri Mantra gets its name. Her name is loosely translated as “the one who flows”, which is why Saraswati River got its name too. She is the deity of the river in the Rig Veda. The same meaning is applied to her intellectual thoughts and words. She represents the free flow of wisdom and consciousness and is considered to be the mother of the Vedas, which is why Saraswati Vandana chants often mark the beginning and end of all Vedic lessons.

Goddess Saraswati is given a special position in the Vedas. She is the goddess of gyaan (knowledge), kala (arts), pragna (wisdom) and shiksha or vidya (learning). She is described in the Rig Veda (2.41.16) as the best of divine mothers अम्बितमे नदीतमे देवितमे सरस्वति | ambitame naditame devitame sarasvati; O best of divine mothers, we stand insignificant in front of You. O Mother, please bless us!

Today, people perform Saraswati puja mainly on Vasant Panchami for Her blessing. It is the festival dedicated to offering prayers to Her. On this day parents encourage their children to write as it She is associated with learning.

However, the ancient idea of remembering Saraswati was spiritually deeper. She is one of the emanations of Purusha (Supreme Lord) engaged in protecting the saintly beings from the clutches of avidya (nescience or ignorance). She is in charge of Knowledge, Arts, Wisdom and Vidya.

The modern idea of knowledge is awareness of the various aspects of one’s profession and general knowledge. The ancient idea was associated with both; spirituality and worldly affairs. During the Vedic Age, the civilized society had four classes namely Brahmin or Intelligent class, Kshatriya or Administration class, Vaishya or Mercantile class and Shudra or Labor class. Everyone in their respective class had to perform sacrifices (religious and spiritual duties) and their occupational duties. Knowledge in both was absolutely required for the perfection of their acts. In the Bhagavad Gita (18.5), the Lord says:

The fifth night of Navratri sees with worship of Goddess Saraswati which is performed by using sacred puja items. The devotee uses a shallow pan like utensil made of clay as base. Three layers of mud and Sapta Dhanya/Navadhanya (grains) seeds are poured into the pan. The next is a little water is sprinkled so that seeds get enough moisture. A Kalasha (holy water pot) filled with Ganga jal, Supari, a few coins, Akshat (raw rice mixed with turmeric powder) and Durva grass is placed in the base. Then the five Mango tree leaves put around the neck of the Kalash which is then covered by a coconut.

All of them used to perform their duties as given below: 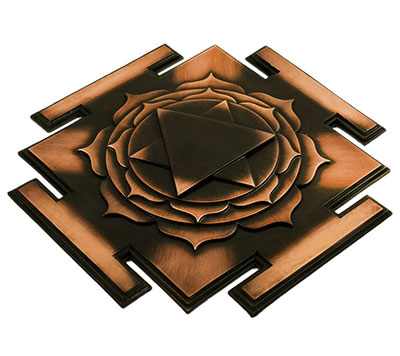 Every one of them maintained the knowledge of their respective occupation ensuring that they never digressed from the paths shown by the revealed scriptures (the Vedas). To maintain their occupational and social strengths, the kings and mercantile communities performed Saraswati puja under the guidance of Brahmins. Goddess Saraswati protected and preserved their acquired knowledge so that they all could perform their duties and attain Moksha (liberation).

One should not misunderstand the position of Shudra who dutifully served the others and accepted whatever rewards received from them. Although occupationally they may be considered as a lower class as they engaged in menial work, spiritually all of them could attain Mokhsa as the Lord says in the Gita (9.32)

O The important point, all of them had to perform their respective duties to attain the supreme destination.

Arts can be said to include any form of presentation that needs creative inputs. It may be music, painting or public speaking faculty. Music has played the greatest role in stringing all the humans together since ages. ‘Bhakti’ or ‘Harinaam Samkirtan’ has always been expressed through music. Even in the heavenly abode of King Indra there are celestial singers who please the Supreme Lord through music. Goddess Saraswati protects the artistic ability of a devotee who performs Bhakti for the Lord. Similarly, there used to be artists who pictured the forms of Supreme Purusha. Others used to be great orators or poets who used to narrate or sing the glories of the Lord. The ruling King was pleased with such services.
People worshipped Goddess Saraswati for protecting their art which was used with a spiritual spirit.

History has always produced wise men and philosophers who studied the natural functions of the Universe, observed others in general and offered discourses on ethics and morality. Chanakya Pundit was one of the wisest, wittiest men. He studied various scriptures such as the Mahabharata, the Ramayana, the Puranas and other contemporary philosophies and helped build the Gupta Empire. Goddess Saraswati protects the wisdom of wise men and holds them back from falling into corrupt thinking.

It is related to scriptural reading. ‘Vidya’ meaning ‘Knowledge’ comes from the Sanskrit root ‘Vid’ of ‘Vedas’. The root ‘vid’ means ‘to know’. The one who studies scriptures, observes others and practices what is learnt is called ‘Vidvaan’ or the one who is knowledgeable. Goddess Saraswati protected the scriptural knowledge of Pundits and philosophers.


One should therefore understand the position of Goddess Saraswati in the Vedas and celebrate Saraswati Puja very submissively asking Her for preserving family values, cultural values and ethics. Success or excellence in education or exams is automatically achieved when the cultural values are properly followed in a family.

Meaning:
" May Vag Devi bestow on us the power of speech "

Meaning:
" Chanted by the devotees as an offering or salutations to Goddess Saraswati "

Meaning:
" We bow down to Goddess Maha Saraswati "

Meaning:
" May the goddess of Vedas (Saraswati) bless us with intelligence "

Meaning:
" We bow down to and ask the goddess of learning Saraswati for intelligence "

Meaning:
" We bow down to and ask the goddess of learning Saraswati for wisdom of wealth and knowledge "

Meaning:
" We bow down to and ask the goddess of learning Saraswati for fearlessness of life arising out of knowledge and intelligence "

Meaning:
" We bow down to and ask the goddess of learning Saraswati for dispelling all fears and enlightening us with more knowledge and intelligence "