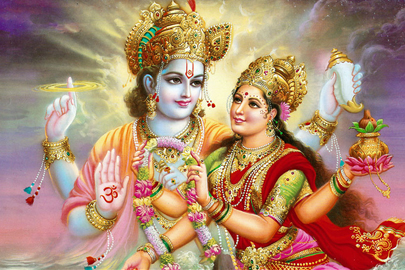 Ekadashi is a fast observed by Hindus, twice every month, which has been followed since ancient times. The Ekadashi falls on the 11th day of the Hindu Lunar calendar of the dark fortnight, the Krishna Paksha and on the bright fortnight, the Shukla Paksha, respectively. Observing fast on this day in honour of Lord Vishnu has many benefits and is said to liberate the devotee of sins. With the pure intention in heart, following the fast strictly on Ekadashi is believed to give a place to the devotee at the feet of Divine Lord Vishnu, when the soul transcends to the other world.

The holy Ekadashi fasts are open to being followed by anyone who wishes to do so, beyond any sect. There are rules which the devotee needs to adhere to, including staying awake on the night of Ekadashi, failing which, the fast is considered null and void. The Rishis or Munis too observed the Ekadashi fasts to please Lord Hari (Vishnu). You can either keep a dry fast or a normal fast abstaining from all food or eating a fruit-based diet. There are 24 Ekadashis in a year, with the Leap years having 26 Ekadashis. This day is considered auspicious and both the Krishna Paksha and Shukla Paksha Ekadashis are equally powerful.

The next Ekadasi after the Paapmochani Ekadasi is on the 11th day of the waxing Moon phase or the Shukla Paksha of the month of Chaitra (March-April) is Kamada Ekadasi.

Those who observe the fast must break it after sunrise the next day of Ekadashi. It is to be noted that one should break the fast (Parana) within Dwadashi Tithi. Dwadashi ends at 7:17 PM on 24th April. Another important consideration is that one must not break the fast during Hari Vasara which is the fourth duration of Dwadashi. The best time to break the fast is pratahkala (morning).
Book Now Ekadashi Puja

The devotee who observes the Kamada Ekadasi is blessed with fulfilment of desire. It removes curses and cleanses the consciousness by grace of Lord Vishnu. The most heinous of sins are absolved by observing Kamada Ekadasi.

In the ancient Hindu text, the Bhavisya Uttara Purana, the importance of fasting on this Ekadashi has been mentioned clearly. The ancient text has Lord Krishna explaining to Yudhisthira about the importance where the Lord has said it is greater than all sacrifices or charity to the needy or the sacrifice of Horses (Ashvamedha) or even seeing Lord Vishnu Himself. It is said that one who observes fast on this day, adhering to the rules, will be liberated and get a place in Lord Vishnu's abode.

The story of Kamada Ekadasi was narrated by Lord Sri Krishna to Yudhishtira and is from the Varaha Purana.The Kamada Ekadasi story took place in a kingdom called Bhogipura which had a reasonable population of Gandharvas, Apsaras and Kinnaras living as citizens of the place. A Gandharva couple, Lalit and his wife Lalita were excellent as dancers and were so much in love with each other that they were constantly thinking of each other.

Once Lalit was performing in the court of King Pundarika, it was his solo singing performance while Apsaras danced. His mind was filled with thoughts of his dear wife Lalita. This resulted in Lalit going wrong in his singing, missing the beats and the rhythm because he could not focus. This was noticed by an envious snake by the name of Kakot who was in the court and pointed this to the King. On realising that Lalit was not focusing on singing the song, the King got enraged and took it as an insult to him. The angry king cursed Lalit that he will immediately turn into a Cannibal, the one who eats humans, raw meat and drinks.

No sooner had the King uttered the curse that the good looking Lalit turned into an ugly monster who was enormous in size, with a wide mouth, big crimson eyes, flared huge nostrils, everything about Lalit became terrible and terrifying. His wife Lalita was overwhelmed at this and wondered how she would be able to live, now that her loving husband had become a beast. She lamented and kept on thinking about how she could get her husband back.

However, Lalita used to aimlessly wander around with her now Cannibal husband and she was witness to his wild deplorable acts which she could not do anything to help. One day, it was Lalita's good luck that she met Sage Shringi on top of the Vindhyachal hill. On seeing the holy sage Lalita immediately offered her respect and bowed down to him. Sage Shringi noticed that Lalita's face was strained and so he inquired what was causing such grief and tension to her. Lalita told the good sage everything about Lalit, the curse and the present condition. She pleaded with the sage to tell her what ritual or pious act she should perform that will remove the curse from her husband.

Sage Shringi advised her to observe the fast on Kamada Ekadasi by following all rules and regulations and then pass the merits earned to her husband and it would miraculously bring her husband back to normal by the grace of Lord Vishnu.

Fortunately for Lalita, the Kamada Ekadasi came soon after her meeting with the sage. So Lalita observed the Kamada Ekadasi meticulously and stayed awake at night. The following morning, the morning of Dwadasi (12th day), she stood in front of the deity of Lord Vasudeva and requested Him to transfer all the merits earned by her by observing the Kamada Ekadasi religiously to be transferred to her husband Lalit, so that the effect of the curse of King Pundarika which turned him to a horrendous Cannibal be removed permanently. The Lord heard her request. Lalit who was standing nearby was immediately liberated from the curse and regained his original form of the loving Lalit, the Gandharva. The loving couple then ascended to heaven once more and lived in more abundance and joy.

The rituals of Kamada Ekadashi are specified in the ancient Hindu texts and are said to have been specified by Lord Sri Krishna while answering Yudhishthira's (one of the Pandava brothers from Mahabharata) query. The rituals are:-

1) One day before Kamada Ekadashi, which is the 10th on the day of the Krishna Paksha, the person should clean his/her teeth thoroughly in the afternoon and have supper at Sunset hour.
2) On the morning of Kamada Ekadashi, the person should intend on keeping the fast meticulously. The person should have a bath in a river (which is said to be most purifying) or a lake and in both not being available, bathe with pond water.
3) While bathing the person should smear mud on his/her body with chanting a prayer to Mother Earth.
The prayer: O Asvakrante! O Rathakrante! O Vishnukrante! O Vasundhara! O Mrttike!
Translation: O Mother Earth! please remove all my sins accumulated from past lives so that I may enter the abode of the Lord Vishnu the Supreme Lord.
4) Worship Lord Govinda with complete dedication and Offer an excellent 'Bhog' (food to Divine) along with flowers and other things of the offering.
5) Light a lamp at home in honour of the Lord
6) Chant or sing praises of Lord Vishnu throughout the day and remain in a most blissful state during the fast.
7) Stay awake through the night in full consciousness. If possible play musical instruments throughout the night to please the Lord.
8) The next morning the person should give charity to Brahmanas and respectfully ask them for forgiveness for any offence.
9) For people who keep a complete fast till the next day, one should say the prayer -
"O Pundarikaksha, O lotus-eyed Lord, now I will eat. Please shelter me".
10) After the prayer the devotee should offer flowers and water at the lotus feet of Lord Vishnu and request the Lord to eat by chanting the mantra of eight-syllable, thrice. To garner the full merits of the fast, the devotee should have water which has been offered to the Lord.
11) Fire sacrifices can be performed if the devotee chooses to do so