Lord Kubera is the God of Wealth and is also known as the king of Yakshas (nature spirits). According to the Vedic scriptures, Kuber is treasurer of the Gods and the custodian of the Universal wealth that is dispersed by Goddess Mahalaxmi. He is a true representation of wealth, prosperity and glory.

Lord Kubera not only distributes, but also maintains and guards all the treasures of this universe. Hence, he is also known as the Guardian of wealth. According to the Vishnu dharmottara Purana, Lord Kubera is said to be the embodiment of Artha (wealth, glory and prosperity) and Arthashastras, the treatises related to it. 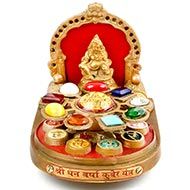 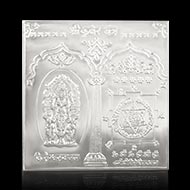 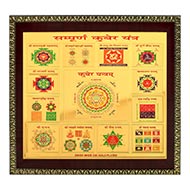 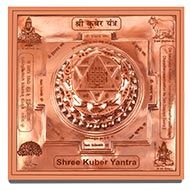 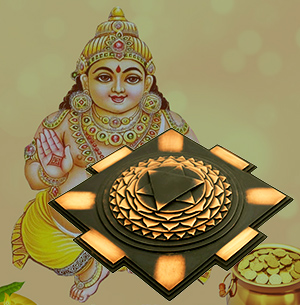 To acquire wealth and safeguard the existing wealth you can install the Kuber Yantra in your homes and offices. The Kuber Yantra is a sacred instrument that consists of a figure or symbol characterized by simple geometric forms arranged in a symmetric design that resonates with the powers and positive frequencies of Lord Kuber. The Yantra has the power to attract the principles of Lord Kuber and through its mantra and blesses the worshipper with abundant wealth, prosperity and also safeguards the existing wealth.

One must always pay attention while installing the Yantra, as it is very important to place the Yantra in the appropriate direction. Yantra energizes the location where it is installed. You may place it near the entrance of your home/office/shop or in your living room or reception or study room or office cabin. You may keep it on a table Yantra or use as a wall hanging. Yantra is best placed in the East direction facing West. It gets energised by the rays of the rising Sun and with the divine vibrations of the East corner and provides positive transformation energies to the dwelling through its mystical geometry.

Yantras are the ultimate answer for establishing a vibration of large amplitude or resonance with the benefic energies of the cosmos. Thus the vibration generated gets us in contact with highly elevated energies & entities which put us on a spiritual path resonant with the principles of the deity of that Yantra.

When you look at the Kuber Yantra, you will notice certain symbols that are engraved or printed on it. These symbols include the shatkona (six-pointed star) and Padma (divine lotus) along with a few numbers.

The Shatkona represents an archetypal amalgamation of two triangles structured in all the Yantra. It characteristically signifies the divine unification of Shiva (Male energy) and Shakti (Female energy) which is the cause of all creation while the Padma represents lotus. All the Vedic scriptures as well as the scriptures of other faiths consider lotus to be the divine emblem of purity that resides in the chakras. The lotus serves as a divine seat for Devas (Gods). A lotus in Yantra represents the unconditional force of the Supreme Absolute Truth that is detachment. It grows in the mud but never touches even a tinge of mud, representing detachment to the external forces (material world) and maintaining the original nature which is pure and divine.


Kuber Yantra - An object of Meditation

This Yantra can also be used for meditating over Lord Kuber. This will help in making you more focused and mentally stable. It will also aid in attaining union with God through geometric visualization. This Yantra is the window through which you can align with divine energy. Through resonance it connects you to the energy present in the macrocosm.

Worshipping Kuber Yantra on a regular basis brings about a distinct change in one’s prosperity and luck. One begins to accumulate money and starts earning from his assets. The drainage of funds and unknown losses in business stop due to blessings and effect of the Yantra.

This is an extremely powerful Yantra. The one who possess it, will never lack in money, material comforts and his house as well as treasury will always be full. His family will never fall short of resources.

You can also meditate over the Kuber Yantra by channelizing your focus and concentrating on it. This activity helps in making you focused and aids to attain union with God through geometric visualization. It is the window through which you can align with divine energy. Through resonance it connects you to the energy present in the macrocosm.

Yantra energizes the location where it is installed. You may place it near the entrance of your home/office/shop or in your living room or reception or study room or office cabin. You may keep it on a table or use as a wall hanging. Yantra is best placed in the East direction facing west. It gets energised by the rays of the rising Sun and with the divine vibrations of the East corner and provides positive transformation energies to the dwelling through its mystical geometry. It blesses the worshipper with money and prosperity by drawing new avenues and sources of income and wealth. It helps increase the flow of funds and the ability to accumulate wealth.

Lord Kubera and His physical appearance

Much is said of the peculiarities and uniqueness of the appearance of the Gods in Hinduism. The discussion of the manifestation of Lord Kubera is no different. He is seen bedecked with a lot of jewelry carrying a bag of gold coins, a mace, a mongoose and occasionally fruit like a pomegranate in hands. As mentioned earlier, Kubera has been blessed with wealth and abundance. However, the same cannot be said about His appearance. He is portrayed as a dwarf who looks unattractive and deformed with uncharacteristically white skin. He is often shown with only one eye (believed to be lost due to an angry reaction from Goddess Parvati who once mistook Him to be winking at Her lustily), three legs and a set of only eight teeth. The depiction may conjure up a picture of ghastly repulsiveness, but the serene expression the Lord wears all negativities; He does not need good looks but carries forth focusing on His responsibility of looking after and discharging wealth and abundance in the world.

A number of beliefs propounded by various ancient scriptures depict Kubera in different ways. Some state that Kubera was the ruler of evil spirits. He has also been portrayed as the chief of spirits of darkness or even the Lord of criminals and thieves. Kubera has also been described as one born from a cow.

Kubera is basically believed to be the son of Sage Vishrava who also fathered Ravana, Kumbhakarna, Vibhishana and Soorpankha to render them His step-siblings. According to some mythological beliefs, Kubera was also Lord Brahma's grandson who deserted His father Vishrava and went to live with His grandfather. Pleased with His act, Lord Brahma conferred immortality upon Him and also the all the riches of the world (Nidhis). Lord Brahma also awarded Him Pushpaka, a spectacular gigantic aerial vehicle that would transport Him anywhere at a speed willed by Him.

Kubera was originally the ruler of Lanka but His scheming step-brother Ravana supplanted Him by performing severe austerities to obtain powers for that. He also seized Kubera's magic vehicle Pushpaka and banished Him from lanka. Vishwakarma, the builder of the Gods created a new abode for him called Alaka or Alakapuri in the Himalayas. Alakapuri was in close proximity to Mount Kailash, the abode of Lord Shiva. His new kingdom was splendid and opulent beyond imagination. He also owned a beautiful garden called Chaitrarath on Mount Mandara. Since it was located in the North, the direction Kubera rules, it was ideal for Him to dwell in and discharge His duties of safeguarding treasures of gold, silver, jewels, pearls and the nine Nidhis (special treasures) on the earth.

The Famous Feast of Kubera

Numerous legends are associated with Kubera. The Feast of Kubera is worth mentioning here as the moral it conveys is an important one that materialistic being in possession of great wealth certainly need to learn. The legend is recounted and narrated many a times teaches us that pride comes before a fall and inspires us to accept that we should never assume arrogance for material possessions.

Once Kubera, with an intention to show off His wealth, organized a grand feast and so invited Shiva and Parvati The invitation was rejected citing inability to attend but it was promised that Ganesha would represent them. Kubera made light of it and proclaimed that he could feed thousands of children like Ganesha.

The day of the feast arrived and Ganesha went to Kubera's palace. When He sat down to dine, He finished off all the food offered to Him. More food was offered to Ganesha as His hunger wasn't satiated. Kubera kept offering food to Ganesha, who would ask for more. In some time, all the food at the palace was exhausted where even the guests hadn't eaten and Ganesha was still very hungry. In order to satisfy His hunger, He began eating the dishes and even the furniture around. Kubera was frightened on seeing the turn of events, more so when He noticed that even His kingdom could be devoured by Ganesha.

Kubera ran to Lord Shiva and told Him what was happening. He implored Lord Shiva to provide a solution. He simply smiled and gave a handful of rice to Kubera for Ganesha and told Him to serve it with humility. Kubera realised His folly and fell at the feet of Lord Shiva, begging for forgiveness. When the bowl of rice was offered to Ganesha with humbleness, His hunger was satisfied.

Kubera, the great God of wealth and extraordinary Siddhis is also known as Iccha-vasu (who can attain wealth at will). He is also known as Ratna-garbha (womb of jewels) who is in supreme command of all the riches in the world.

If you wish to invoke and please the great giver of wealth to shower upon you cosmic riches and amplify cash flow in business and at home, chant the divine Kubera Gayatri mantra given below facing the north direction:

Meaning:
We pay obeisance to Kubera, the king of the Yakshas and son of Vishrava.. We request the great Lord of wealth and fortune to bless us".
You can also keep the Kubera Yantra at home to attract wealth, open new avenues of income and boost business. Rudra Centre offers a range of Kubera Yantra that you can obtain and ensure your treasury overflows with wealth and abundance always.

Meaning:
" I bow down to Lord Kuber who is the custodian of all the wealth in the world and the Lord of success "

Meaning:
" I bow to the Lord Kuber who is the giver of wealth and fame and destroyer of all that is evil "

Meaning:
" Ode to the Superior Lord Kuber, the partner of Goddess Laxmi to bestow upon me all the wealth and happiness of the world "

Meaning:
" We meditate on Lord Kuber who is the king of the Yakshas and the son of Vishravana. May the God of wealth illumine our intellect and inspire us "