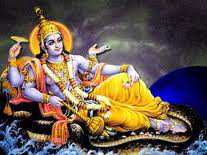 Lord Narayana, known as Vishnu, is the Vedic Supreme God worshipped most devotedly in Vaishnavism. The Vedas, the Puranas and the Bhagwad Gita regard Him as The Supreme Lord or Purushottama. He is revered as the same, which means He is the greatest Godhead. Sacred texts regard Him as the Infinite One who pervades everywhere - in the biggest figure and in the tiniest speck of the universe.

The glories of Lord Narayana

Hari or Purushottama as Lord Narayana is also known, is depicted by the Vedas and the Puranas as a divinely blue-complexioned Godhead with four arms carrying sacred objects like a Padma (lotus flower), a Shankha (conch), a Mace and the Sudarshana Chakra (discus as a weapon). Bhagavata Purana refers to Him as Para Brahman (Supreme Lord) and Bhagwad Geeta affirms Him as Vishvarupa (having the form of the universe).

Narayana is extolled as Parabrahman, Paramatma and Parameshwar by the Holy Scriptures like the Vedas, which render Him the great supreme force. The divine invocation Antar Vahisca Sarvam Vyapta Narayana stitaha means Narayana encompasses the entire universe in all its dimensions inside and out.

Origin of the name Narayana

Several dimensions and meanings can be attributed to Lord Narayana's divine name. The root word "nara" means man although it refers to water when associated with the Lord, as He is infinite like the ocean. In Sanskrit, water connotes 'Naara' and "Ayana' means the resting place. The Supreme Lord Vishnu (Narayana) is often depicted as standing or sitting on an ocean. Chanting the holy name Narayana is believed to reinforce the good and annihilate the vice.

Narayana is also revered as Mukunda, which means God who gives mukti (Moksha) or freedom from that which is bad, like the material world. Lord Narayana has infinite powers to accomplish that. He is the Supreme and nothing exists beyond Him. He is known to live in the heavenly planet Vaikuntha which is His supreme abode where divine bliss prevails. In the epic Mahabharata, Krishna is often addressed as Narayana and Arjuna is referred to as Nara. He is also addressed as Hari or Vasudeva on numerous occasions.

Goddess Lakshmi is the consort of Lord Narayana, hence Lakshmi Narayana refers to Lord Narayana when He is with Goddess Lakshmi. Their union is usually depicted as the Goddess being seated by Narayana's feet who is resting under the celestial serpant Sesha's hoods floating in Ksheer Sagar (the Ocean of Milk).

The tale of Bhasmasura and his end

Ancient scriptures are rich with legends recounting events related to Gods and Goddesses. A number of legends are associated with Lord Narayana too. One that is narrated often is related to Bhasmasura, an asura who was a devotee of Lord Shiva. Bhasmasura performed severe penance to win a boon. Shiva, who pleased with the devotion, offered him to ask for a boon. Bhasmasura said he wanted immortality, but Lord Shiva expressed His inability to grant him that.

Bhasmasura cunningly urged to be given the power which will make anyone whose head he touched with his hand to burn and turn into ashes (bhasma). Lord Shiva had to fulfill the wish. But the evil Bhasmasura ran to touch Lord Shiva's head. He tried to escape but Bhasmasura would not relent. He approached Lord Vishnu (Narayana) for help, who assumed the form of a bewitchingly beautiful nymphet, Mohini to allure Bhasmasura. She tricked Bhasmasur to imitate her dance steps to marry her. Mesmerized by Her, he did as she told.

Eventually, Mohini assumed a pose where her hand was placed on her head. Bhasmasura imitated the step and unwittingly touched his own head, which led to him burning down and turning into ashes. Hence, the name Bhasmasura is used to address the demon.

Another popular legend has it that once Lord Brahma was once singing praises of Himself before His devotees. Lord Narayana, displeased with His conceit, decided to take Him around the universe so that He could see some sages meditating for ages. When Lord Brahma saw them and their calm demeanor despite possessing the greatest knowledge, he realized His folly and gave up His ego.

Once Lord Indra angered the sage named Durvasa who felt insulted by an act of the elephant Lord Indra was riding on. In a rage of fury, Durvasa cursed Lord Indra and all Devas to lose their glory, might and fortune.

Several battles between the Devas and the Asuras ensued, in which the Devas were defeated and lost control over the universe. Alarmed, the Devas approached God Vishnu who told them to draw a truce tactfully with the Asuras and divert their minds and make an offer of churning the Ocean of Milk for Amrit, the nectar of immortality and to share it with them.

The Asuras complied and soon, Mount Mandara was turned into a churning rod, and Vasuki, the greatest serpent became the churning rope.

The Asuras decided to hold the head of the snake and the Devas settled to hold its tail. Vasuki began releasing poisonous fumes, which affected the Asuras. They continued pulling at Vasuki coiled at the mountain to make it rotate. However, when the mountain was kept in the ocean, it began to sink. Lord Vishnu appeared in the form of a tortoise Kurma, and entered the water to support the huge mountain on His back. His role was crucial in advancing Samudra Manthan, which brought up a lot of things after which finally a great figure, Dhanvantari (an Avatar of Vishnu) emerged from the ocean carrying a pitcher filled with Amrit for which the celestial struggle was on.

The Devas and Asuras were overjoyed. The Asuras became so impatient to drink Amrit that they snatched it from the hands of Dhanvantri which resulted in a cosmic war again. To prevent the Asuras from drinking Amrit and attaining supremacy, Lord Vishnu assumed the form of a beautiful nymph, Mohini to mesmerize the Asuras so that they would be enraptured and the nectar could be taken away from them for the Devas. Mohini (Lord Vishnu) succeeded in mesmerised the Asuras with her beauty and fooled them into giving her the Amrit to distribute it amongst the Asuras and Devtas equally.