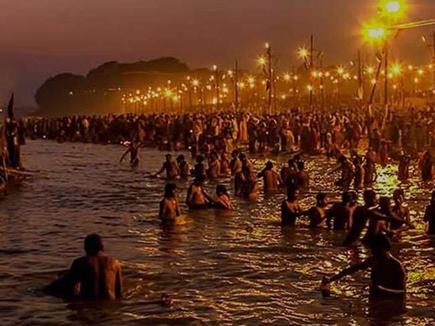 Mauni Amavasya in 2020 is falling on 24th January (Friday). ‘Mauni’ is derived from the Sanskrit word mauna which means silence or absolute silence. It is the time when the Hindus fast by keeping silent or, in other words, restrain their mind from darting about in thoughts that are expressed through the tongue. As per the North Indian calendar, Mauni Amavasya falling in the middle of Magha month (Feb-March) is regarded as Maghi Amavasya as well. The Sanskrit word Amavasya is made of ‘Ama’ meaning ‘together’ and vasya meaning ‘to live’. It means ‘to live or dwell together’. Therefore Mauni Amavasya means to co-exist with absolute silence. With whom? With the mind. It is to co-exist with the ever flickering mind by restraining it through mauna or silence.

One should take bath in the Holy Ganges (River Ganga) as it is believed on this day that Ganga becomes nectar for anyone who wants to purify their mind, body, heart and soul. Mauni Amavasya is also known as Maghi Amavasya because it happens in the month of Magha (Feb-March). And devotees in North India bathe in Ganga through the month. This Amavasya becomes prominently followed during the month of Kumbha Mela.


In the Vedic astrology, Chandra the moon god is the ruling deity of the mind. On Mauni Amavasya, the mind in the absence of Moon is unable to make decisions or tends to oscillate more. Chandra Dec or the Moon deity controls the thoughts or the mind and impulses to act in certain situations. It becomes more flickering.

When the mind is unstable, actions performed do not yield any results. In the Bhagvad Gita (6.5) it is mentioned: One must deliver himself with the help of his mind, and not degrade himself. The mind is the friend of the conditioned soul, and his enemy as well. The mind when properly trained is the best friend and the worst enemy is not trained. The nature of mind as described in the Gita (6.34) is restless, turbulent, obstinate and very strong. That’s why on Mauni Amavasya it is important to keep silence, one of the best ways to control the tongue which is provoked by the restless mind. Therefore Mauni Amavasya is for keeping silent in order to restrain the mind and the tongue. In addition to this, taking bath in Ganga further purifies one’s mind (internally) and body (externally).


How to Celebrate Maunu Amavasya:  Things to Do on This Amavasya

It is important to fast and bathe in River Ganga on this Amavasya. One you can do some of the following things if not all.