What is Tanjore Painting 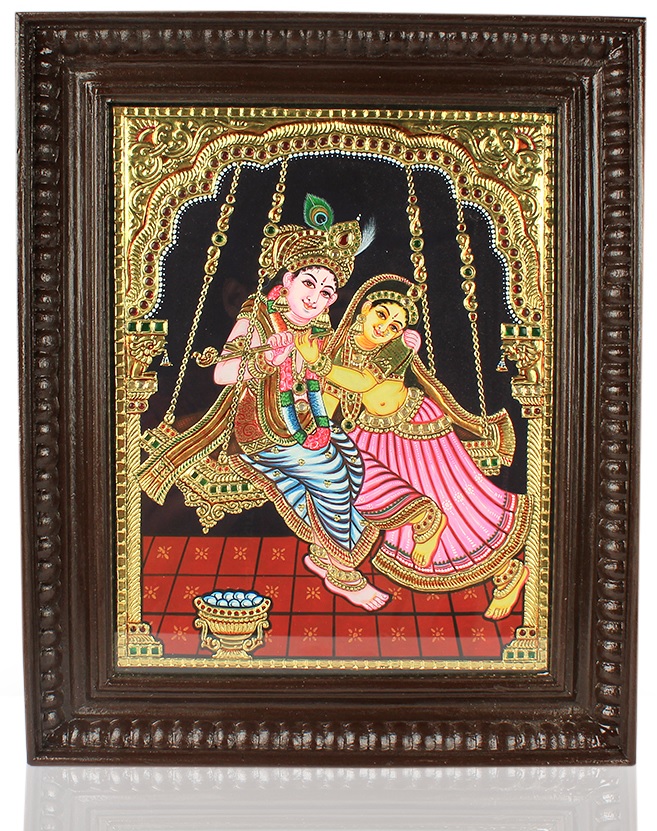 Tanjore Paintings or Thanjavur paintings are the most famous forms of South Indian classical paintings which originated from the town of Thanjavur (also known as Tanjore) city of Tamil Nadu. This marvellous art form gained immense popularity and quickly spread across the state of Tamil Nadu. The era of 1600 AD was the period when the Nayakas of Thanjavur were under the partial control of the Vijayanagara Rayas. This was the period when the Vijayanagara Rayas encouraged art, primarily classical dance, music, literature and paintings. The paintings of this era portrayed subjects that were related to Hindu religion. This included Gods, Goddess and saints.

Uniqueness of the Tanjore Paintings

The magnificent Tanjore paintings are distinctive and are identified by the shimmering gold foils which are overlaid on extensive and delicate gesso. These paintings feature dense yet simple compositions, are very rich, have vibrant colours, and have an inlay of semi-precious gemstones, and glass beads.

If observed closely, The Tanjore or Thanjavur paintings found its inspiration and were influenced by the Maratha, Vijayanagar, Deccani, and European Company styles of paintings. The Tanjore paintings depict devotional icons which comprises of Hindu Gods and Goddesses saints, episodes of Hindu Puranas, Sthala puranas and other Holy Scriptures.

Thanjavur paintings are also popularly known as ‘Palagai Padam’ in the local language. The word ‘Palagai’ means wooden plank and the word ‘Padam’ means picture. These elegant paintings can now be seen as decorative wall hangings in modern times. These stunning and colourful paintings are valuable in terms of culture but sadly the exclusive and niche Tanjore paintings are now available at cheaper price in the corners of the streets by the poor artists. 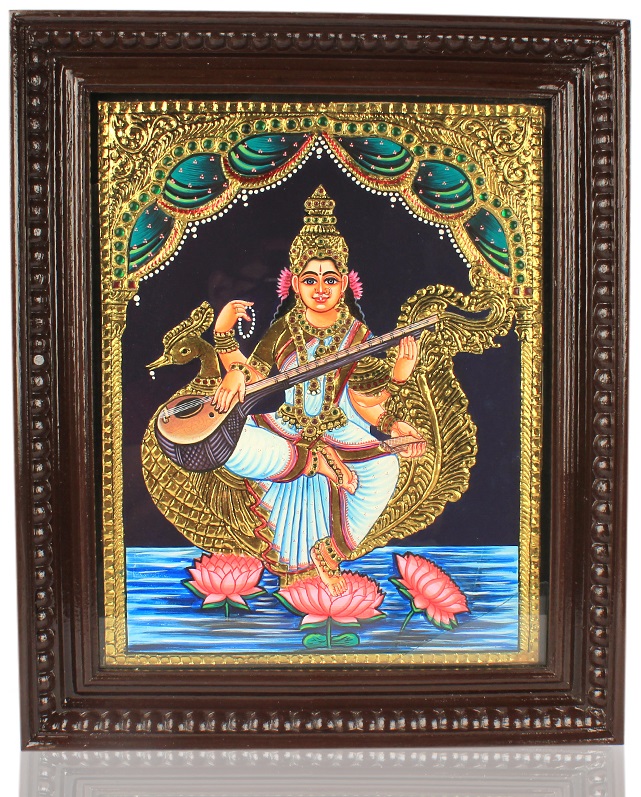 The Thanjavur paintings hold a strong place in the Indian history of paintings. Among all the other forms of paintings, the Tanjore paintings it houses the   wall paintings of the 11th Century Chola dynasty in the temple of Brihadeeswarar. These paintings can also be traced back to the Nayak period during the 16th Century. When the empire of Vijayanagar was defeted in the battle of Talikota, many painters migrated to Thanjavur and worked under the backing of the Thanjavur Nayakas. The Maratha rulers nurtured the atelier of Thanjavur after they defeated the Thanjavur Nayakas in a battle. The artists who had migrated to Thanjavur absorbed the local taste and influences and thus evolved the unique and majestic Tanjore paintings.

There are a number of steps that need to be followed while making the Tanjore Paintings. Given below are few steps that are involved while making the Tanjore paintings. The sketch of the image is first drawn on the base which is made up of cloth, this cloth is pasted on a wooden base. Then chalk powder or zinc oxide is mixed with water-soluble adhesive and applied on the base. After this is done, the sketch is made and is decorated with semi-precious stones, cut glass, and even pearls. Other objects like thread and laces were also used to decorate these paintings. To make the paintings more magnificent, thin sheets of gold were pasted in few parts of the painting while bright colours were used in other parts of the paintings.

The marvellous and plush Tanjore Paintings lit up the ambiance of the place where they are hanged or placed. In olden days owning a Tanjore Painting was a sign of luxury and status. These paintings were enhanced the wall décor of giant palaces and added to the prestige. Today, in this virtual age where time plays a pivotal role, most of the things can be accessed and shopped virtually. You can now shop for The Tanjore paintings online at the best prices. Make sure you are purchasing this from the authentic dealers who source it from the origin.