This Karmic Chakra (Thymus Chakra) is the “seat of the soul”. Characteristics like ‘unconditional love’, ‘forgiveness’ and ‘compassion’ are some of the transpersonal features of this Higher Heart Chakra. I love to call it the Atma Chakra. 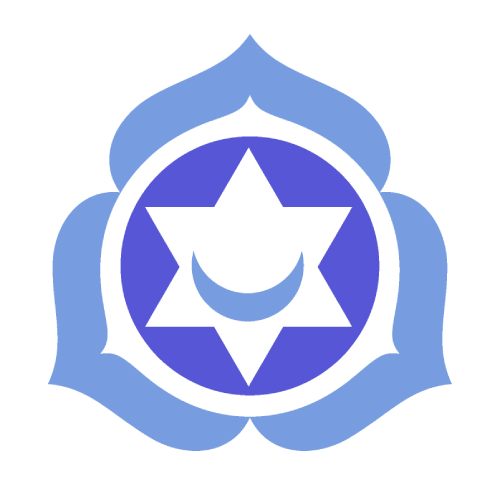 The Thymus Chakra is one of the most pivotal Chakra which is also known as the ‘seat of the soul’. Commonly referred to as the ‘Higher Heart Chakra’, Thymus Chakra Opening Symptoms are represented through unconditional love (free of ego), spiritual growth, great immunity, compassion and forgiveness. These transpersonal features of the Higher Chakra facilitate divine inner transformation and spiritual broadening. The High Heart Chakra thus, is closely linked with your overall vitality and well-being. An open Thymus Chakra helps one to be forgiving, soulful and full of compassion. People with an open Thymus Chakra often believe in spreading and passing on these divine gifts of love and compassion to others through their deeds and aura.

This is the place where ‘Intent’ is located. It is here you connect to the main intention of human birth which is self-realisation and for that aim, you live many other intents that take you on that path. This Higher Chakra helps to bridge connection between the emotions that we feel and the words that we associate to those emotions while expressing them in verbal manner. Hence, if you notice we often take a deep breath before we speak. The Thymus or the Higher Heart Chakra is where the intent associated with the words that are formed and about to be expressed after an emotion is felt. Let us look at an example, you scored a distinction in every subject and you feel happy (emotion). You want to express this emotion or your happiness with words, this is when a particular energy rises to the Throat and then passes through the Thymus Chakra where the function of preparing what to speak begins by drawing or taking a breath. In the similar manner, the act of stopping the breath in order to prevent talking when a certain emotion is felt too is controlled by the Thymus Chakra. Hence, if you noticed many a times we don’t say or express words even if they are on the tip of our tongue. 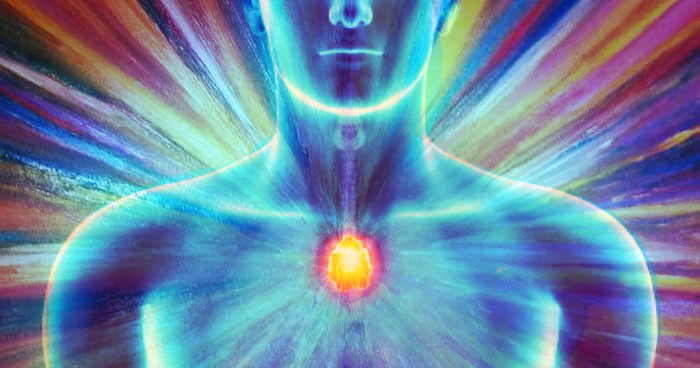 Thymus is an endocrine gland in the human body which is situated between the throat and heart about 2 inches below the ‘V’ of your collar bones. It is an important part of the lymphatic system and of the endocrine system. This gland is most active during childhood but as we grow older it tapers down. Around the age of fifty, the Thymus gland stops working. And then we have to make do with whatever T-cells are still surviving in our body to combat illness.

Is Your Sacred Thymus (Higher Heart) Chakra Healthy or Blocked? 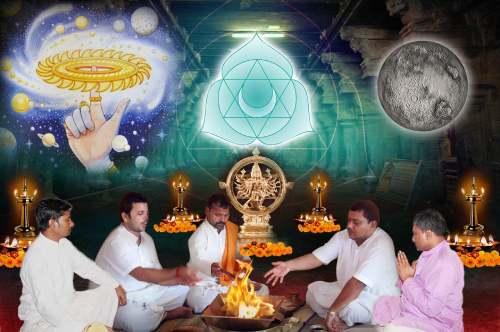 The Thymus (Higher Heart) signifies the Supreme qualities of being one with the Universe. It teaches one the life lessons of loving, forgiving and compassion. For this one has to tune to the nature of Faith Tolerance Understanding PatienceIt helps one to lead a spiritually awakened life and display an altruistic and empathetic nature along. A healthy Higher Heart Chakra leads to having an excellent immune system, believes in reaching out to maximum people and increasing their web of connections. On the other hand an unhealthy Higher Heart Chakra signifies a misalignment with the Oneness of the Universe.

When this Karmic Chakra is open, one experiences and receives Love and also spreads love to others joyfully. An individual with an active Thymus Chakra spreads love, care and is very forgiving, spiritual and compassionate in nature. Moreover, it helps to materialise the dreams and desires of the soul in this lifetime.

On the other hand when this Chakra is overactive, it can lead one into tapping into dreams of others. Yes! You read that right. In such situation, an individual usually taps into dreams of others and no more plays the role of a spectator instead, experiences them as his/ her own. As if the dreams are related to you and you are the owner of the dream.

In addition to this, when there is an excess of energy flow in the centre of the Thymus Chakra, a person may end up being frigid, anxious, impatient, violent, fearful, nervous and become intolerant of people and situations around that he/she finds adverse. The person would find difficult to forgive self and others and would be over protective for the self.

On the contrary, an individual with an underactive Thymus Chakra finds it really difficult to express emotions even when he feels it and lacks compassion and self-acceptance. This individual would find it difficult to process situations and end up submissive and allow it to tread over him. He would tend to lose track of time and would often seem to lose opportunities. He would feel betrayed, overwhelmed and bitter about most of the things that revolve around him. Such individuals tend to hide themselves in face of adversity or subconsciously attack themselves and develop auto immune disorders.

When energy is not flowing freely in Thymus Chakra the emotional effects associated are loss of feelings, self- sulking, lack of confidence or being Hypertensive.

And, Physical Illnesses that arise are:

Thymus Chakra Healing is effective when one chants the Sudarshan Gayatri Mantra. Given below is the mantra along with its meaning.

“Om Sudarshanaya Vidmahe Mahaajvaalaaya Dheemahi, Tanno Chakrah Prachodayaat”Chanting this mantra regularly will create a shield of protection around the devotee’s body by the grace of Lord Sudarshana and offer protection from evils, and negative energies.

Chanting this mantra regularly appeases Lord Sudarshan and offers victory and happiness in all walks of life. Let us now learn the significance of Sudarshana Chakra in order to correlate it with the Thymus Chakra.

The Sudarshan Chakra is the prime weapon of Lord Vishnu. He wore it on His right Index finger. The word "Sudarshana" is a Sanskrit word where "Su" means - right or correct and the word "darshana" means vision. Thus, Su-darshan means divine vision or right Intent. This Holy weapon has 108 has saw-toothed sharp edges. According to the tantric texts, there are ten directions and from these directions there are ten dangerous kinds of doshas known as the Mantravada doshas which attack us. These10 Mantravada doshas are

Chanting the Sarva Karya Siddhi Sudarshana Mantra helps a devotee to appease Lord Vishnu and He protects His devotees by flinging the Sudarshana Chakra at the negative forces, the sharp edges of this Holy Sudarshana Chakra destroy the dark forces and thus the right intent of human origin or birth is preserved. This intent is nothing but self-realisation. It helps an individual to read between the lines and to see the exact purpose behind everything that happens in life. This may include events which are bad or good. During this Pandemic outbreak of ‘Corona’ virus, it is very important and necessary to chant the Sarva Karya Siddhi Sudarshana Mantra, as this mantra works towards opening the door to self-realisation and helps in awakening your conscious mind. This mantra has the power to remove all the fear that has gripped you and guides you to a state that has higher vibrational forces. It has the strength to ignite the fire of healthy and strong immune inside you which would in turn destroy the Virus of Corona. This divine mantra helps you to rise above and look at the clearer picture and surrender to the great design of life with utmost faith. Once your fear is gone and your immune becomes stronger, your Thymus Chakra is activated.

During the event of Samudra Manthan, Lord Vishnu had cut the demon ‘Swarbanu’ into two, who later came to be known as ‘Rahu’ and ‘Ketu’. Thus, Lord Vishnu gained power to control Rahu and Ketu through His weapon Sudarshan Chakra.

Sudarshana Gayatri Mantra to invoke the goodness of the Sudarshana Chakra

Meaning:
Om. I meditate upon the holy discus Sudarshana that holds profound brilliance like a blazing fire. Bless me with intellect and illuminate my mind.

As strongly believed by the devotees, the Sudarshan Chakra paves way for Salvation and is the most powerful among all the other weapons that Lord Vishnu possesses. The Chakra being an aspect of Lord Agni also produces a lot of heat. Also, as mentioned earlier the inner portion of the Chakra which is circular in shape is surrounded by fire thus, representing the Sun God. The circular ring illustrates the victory of good over evil and destruction of the evil. As mentioned earlier, this Chakra destroys enemies in all ten direction and hence, is considered as the “Protector of Dharma”.

An activated or opened Thymus can create wonders in your life. It gives the message to the cosmos that an individual is on the path of light. An activated thymus can change your life. Here’s how:

1. Working towards connecting to Higher Spiritual Levels through initiation

An activated thymus does not only boost your spiritual health but it offers a range of benefits to your physical health. It helps to build a strong immune system. It helps in the production of T-cells which fight against virus and other ailments.

There are other ways too which are mentioned in the ancient texts through which this Chakra can be activated. Other than musical activity or sound therapy, there are a range of practices like Yoga asana, mudra and Pranayama one can perform and undertake to activate the Chakras. Wearing Rudraksha and Gemstones help balance this chakra. Gemstones that would help in giving light to the chakra would be turquoise and aquamarine. Rudraksha would be Gauri Shankar bead of 12 mukhi. One can keep a Sudarshan yantra in his pocket or altar or wear as a pendent to resonate with it. Apart from the above mentioned practices, the Thymus Chakra can be unblocked through Pujas and Homas. Note, the pujas and Homas which are performed to activate the Higher Chakra must be carried out as per Vedic rituals and traditions.

Thus the Karmic Chakra or the Thymus Spiritual Chakra is related to the soul of a person. It helps one to align to the Higher Self Chakra and helps build a bridge between the spiritual Supreme and Self. It helps us to keep our body fit by fighting viruses and foreign antigens that can cause diseases and make our system weak. Thus, the Thymus Chakra helps us to build strong immune system, create a balance between the spiritual world and worldly life.