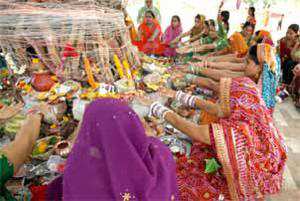 The same festival is celebrated (May 22, 2020 Friday) as Vat Savitri Vrat (Savitri Brata) by the married Hindu Odia women of Odisha (India) and the Hindu women of Mithila region (India and Nepal) on the Amavasya, the no moon day in month of Jyeshtha. The locals also call it Sabitri Uwaans in the western Odisha region.

Traditional festivals of Amanta and Purnimanta as per the Hindu lunar calendar occur on the same day. The northern parts such as Madhya Pradesh, Harayana, Bihar, Punjab and Uttar Pradesh of India go in accordance with Purnimanta Calendar whereas the southern parts follow Amanta Calendar.

Asvapati, the king of Madra Kingdom, had no child. To have a child, he performed penances and offered prayers to the sun god Satvir who granted him a boon that a female child will be born. Later, the king became joyful to see the child born and named Savitri because she was a boon from the sun god Savitri. Since she was born due to her father's sever penances, she naturally led an ascetic life. However, no man was interested in getting her as his wife. Then at the request of her father, she set out to find a man suitable for marriage and met Satyavan, son of the blind king Dyumatsena of Salwa Kingdom. After having determined to marry him, Savitri returned home and saw Narada Muni informing her father about her choosing Satyavan who was going to die in a year. Her father asked her to find someone else she denied saying that she could select a man only once in a lifetime since she was of an ascetic spirit. Narada Muni and her father agreed.

A year later, seated under a banyan tree, Satyavan in his wife's lap was waiting for his death summon from the god of death Yama. Soon, the messengers of Yama appeared on the scene to take away her husband but she refused to hand her husband over to him. They could not take him away until Lord Yama Himself appeared who, seeing her matchless devotion, spiritual knowledge determination, offered her a boon. She asked for eyesight and restoration of the kingdom for her father-in-law, a hundred children for her father, and a hundred children for herself and Satyavan. Yama couldn't agree with her last wish. Nevertheless, impressed by her devotion and pureness, he asked her to wish one more time forgetting to mention his denial to grant the third wish. Savitru immediately asked for the life of Satyavan. The death god Yama who does not spare even a sinned ant had to return the life to Satyavan.

How is Vat Purnima celebrated?

On this day, wives pray to the Divine for their husbands prosperity and longevity by performing Vat Purnima Puja Vidh which includes tying ritual threads around the trunk of a banyan tree (Vata); this ritual is also called as Peepal puja.