Goddess Durga is also called Shakti and She symbolises power and strength. She is a multi-dimensional Goddess, with many names, many personas, and many facets. As Mahishasuramardini, she is the destroyer of evil - with her ten mighty arms carrying lethal weapons she triumphantly slays the demon Mahishasura. As Sati, beloved daughter of King Daksha and Queen Menaka she gives up a kingdom and earns her father's wrath. As Kali, she turns black as the night and omnipotent, terrible in rage and fury, with just a string of skulls as her garland and her only garb. As Parvati, she is serene, the pretty consort of Lord Shiva by his side in the snowy peaks of the Kailash mountain. She is Bhawani, symbol of life. She is Sati, the object of death. She is Basanti, the one who heralds springtime. She is also Amba, Jagadhatri, Tara, Ambika and Annapurna.

Durga, through all her forms, encompasses the essence of salvation and sacrifice. She is the mother of bounty and wealth, as also of beauty and knowledge, for her other forms are Laxmi and Saraswati(Hindu goddesses of wealth and knowledge, respectively).

She is the embodiment of purity, knowledge, truth and self-realisation. Goddess Durga is the inherent dynamic energy through which this supreme consciousness manifests itself. She represents the power of the Supreme Being that preserves moral order and righteousness in the universe.

The Sanskrit word Durga means a fort, or a place that is protected and thus difficult to reach. Durga, also called Divine Mother, protects mankind from evil and misery by destroying evil forces such as selfishness, jealousy, prejudice, hatred, anger, and ego.

A short Video of the Sankalpa and mantra chanting would be sent to you along with the photographs of the Puja ritual. You may connect with the priest during the puja (video or phone call) on WhatsApp or Skype and watch the rituals live. Puja Tokri having prasad, energized Rudraksha, silver tabeez and yantra would be sent along. Rudra Centre priests will perform Durga Puja for Health Wealth Success as per Vedic rituals based on birth details. Please mention your birth details (name, date, place, time), & Sankalp (your wish) at checkout. This is an individual Puja (you may do puja on individual name or include your near and dear ones in the puja). 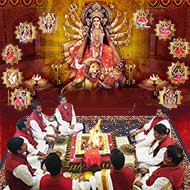 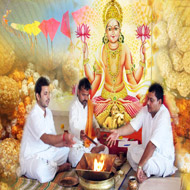 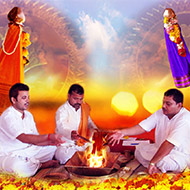 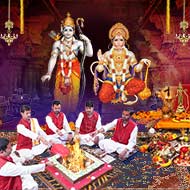