Shri Rudram is a powerful hymn and a prayer that is recited to revere and to worship the Supreme, Lord Shiva. Sri Rudram finds its mention in the Krishna Yajurveda's Taittiriya Samhita. This mantra or hymn comprises of two chapters which are mentioned in the 4th Kanda (book) of the Krishna Yajurveda's Taittiriya Samhita. These two chapters are ‘Namakam’ and ‘Chamakam’.

The uniqueness of this stotra or hymn is that it is dedicated to the all-pervading forms of Lord Shiva which is the ‘Rudra-Shiva’ which means worshipping the Lord in His Rudra (terrifying, angry and destructive) form while, also worshipping Him in His Shiva form which is calm, auspicious and serene.

What is Sri Rudram Namakam Chamakam?

Namakam is a prayer in which the devotee worships Lord Shiva in His Rudra forms by calling out the various names of those forms invoking Him to take the benevolent form. The devotees also ask Him to take the auspicious form and seek forgiveness for their sins. The word ‘Namah’ is a Sanskrit word which refers to paying ‘homage’ or venerating or salutation to Lord Shiva. The literal meaning of the word ‘Namah’ is formed by joining two words where the word ‘Na’ means ‘no’ or ‘not’ and the word ‘Ma’ refers to mine, thus the literal translation of Namah is ‘not mine’. The word ‘Namah’ thus is often used to show humbleness and one’s expression of submitting self to the Supreme power, Lord Shiva.

After offering prayers to Rudra and recognizing Him in the Namakam, Chamakam is immediately recited. In Chamakam, the devotees offer prayers to the Lord asking Him to bless them with 347 boons specifically. Chamakam specifies human happiness and states a list of highest demands that an individual can ask for from the Lord. It talks about various desires and how to ask for them and equally receive them from the Lord. The core of Chamakam is steadily planted in the desires which are worldly which finally leads to the fulfilment of wishes that are divine.

It ends with recitation of Purush Sukta and Durga Sukta.

A short Video of the Sankalpa and mantra chanting would be sent to you along with the photographs of the Puja ritual. You may connect with the priest during the puja (video or phone call) on WhatsApp or Skype and watch the rituals live. Puja Tokri having prasad, energized Rudraksha, silver tabeez and Shiva yantra would be sent along. Rudra Centre priests will perform Rudram Chamakam Yagna as per Vedic rituals based on birth details. Please mention your birth details (name, date, place, time), & Sankalp (your wish) at checkout. This is an individual Puja (you may do puja on individual name or include your near and dear ones in the puja). 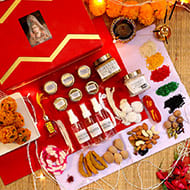