Hindu deities are usually represented in Indian festivals. Devotees celebrate auspicious occasions by visiting temples, performing pujas and rituals to venerate specific Gods and Goddesses. Certain festivals are dedicated to the powerful and extraordinary Goddesses. The nine days of Navratri are spent in revering the feminine form, frequently referred to as the sacred feminine. One of the holy days celebrated during this time is the Maha Navami.

What is Maha Navami? 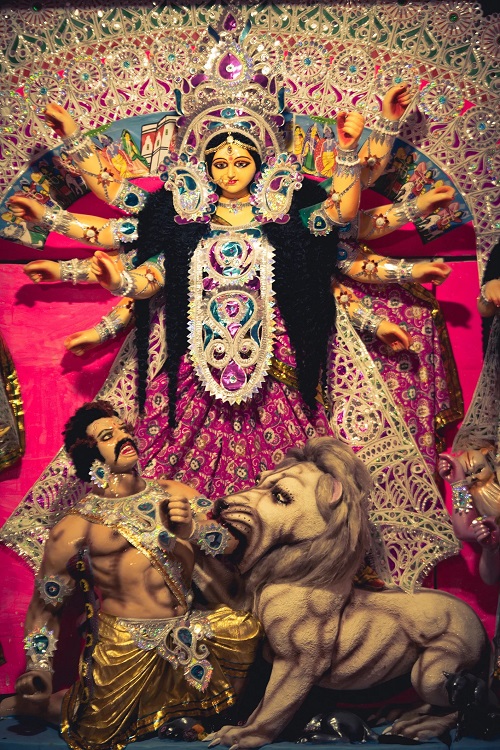 Maha Navami or Durga Navami is commemorated as the victory of good over evil. It is believed to be the last day of battle between Goddess Durga and the evil demon Mahisahasura. It marks the end of Navratri, the nine-day festival devoted to Goddess Durga. After Maha Navami, worshippers celebrate Vijayadashami, also referred to as Dussehra. Goddess Durga devotees pray to Mahisasuramardini on this day.

The tip of the ending of the eighth day (Ashtami) and commencing of the ninth day (Navami) is believed to be the point when Goddess Durga involved herself in a raging battle between Mahisahasura and was attacked by the Asuras – Chanda and Munda. Goddess Chamunda materialized from the third eye of Durga and slayed Chanda and Munda at the cusp of Ashtami and Navami.

This moment is observed by the ‘Sandhi Puja’, involving the offering of 108 lotuses and igniting of 108 lamps. This long ritual is 48 minutes that honor the culmination of the battle. The rituals are believed to be conducted in the last 24 minutes of Ashtami and the first 24 minutes of Navami.

In numerous regions of India, animal sacrifice is made to the Mother Goddess. This ritual has been altered to ritualistic sacrifice over the years. The Goddess is then presented as Bhog or Prasad. On this day, Goddess Durga’s ninth avatar, recognized as Maa Siddhidatari is venerated.

Maha Navami is observed on the navam (or the ninth) day of the Shukla Paksha in the Indian month of Ashwin. As per the English calendar, the auspicious occasion falls in September and October. 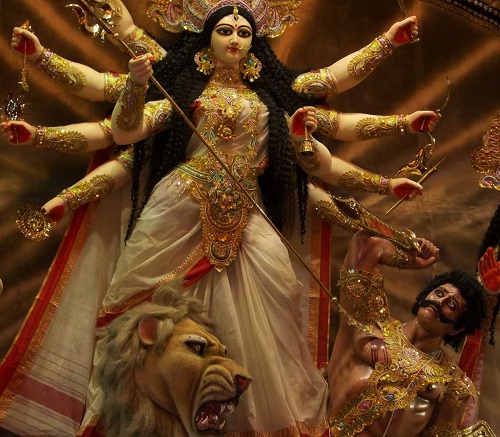 As per the Hindu calendar, there are four Navratras celebrated every year. They are Chaitra Navratri, Ashadha Navratri, Sharada Navratri and the Paush/Magha Navratri. Out of these four, Ashwin Navratri is believed to have the most poignant significance and is widely commemorated. During this Ashwin Navratri (also referred to as Shardiya Navratri or Durga Puja festival, this Goddess is venerated religiously with extreme veneration, in the form of nine avatars or ‘Shakti’.

During the Navaratri, nine forms of Durga Devi or Goddess Parvati are venerated. They are Shailputri, Brahmacharini, Chandraghanta, Kushmanda, Skandmata, Katyayani, Kalratri, Mahagauri and Siddhidatri. Therefore, every form of Durga is venerated on each day during this nine-day festival.

Maha Navami festival is devoted to revering Maa Siddhidatri, the supreme form of Mahashakti. She is worshipped as Mahishasurmardini, considered to be the one who killed the demon Mahishasura (buffalo demon).

This form of the Goddess possesses and denotes the source of life and is considered to be the most supreme form. It is thought that celebrating Maha Navami is of huge significance as it is said that venerating the Goddess on this day is tantamount to the worship performed on all the other eight days of the auspicious festival.

As per Hindu mythology, the battle of Durga Devi against the demon Mahishasura, the king of demons, went on for nine days. The ninth day is believed to be the last day before Goddess Durga declared triumph over evil with her divine powers and knowledge. This is the reason why Maha Navami is commemorated and since then, a special puja is performed to honour her. It is observed as the winning of good over evil. This is why Maha Navami is also believed to be the eve of beginning anything new on Vijaya Dashami. 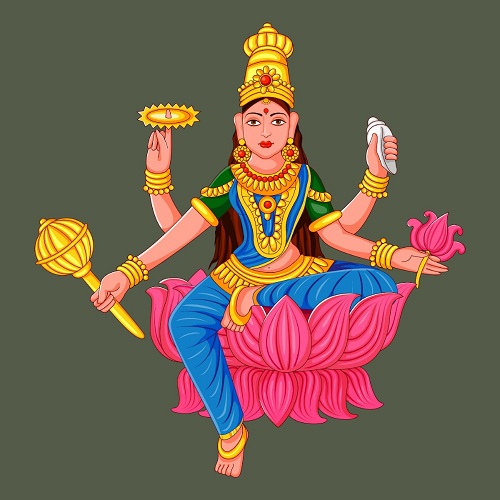 Goddess Siddhidatri is venerated on the ninth day of Navratri. Siddhi implies meditative capability and Dhatri means giver. She is seated on a lotus and comes with four arms that carry a lotus, mace, conch shell and discus. She is showcased riding a lion as the fierce and majestic animal is known to be her vahana (vehicle or mount). This day is also venerated as the Mahanavami festival. According to Indian mythology, Lord Shiva had achieved all the siddhis thanks to the grace of Siddhidatri Devi and this is why half of his body was that of the Goddess. He is referred to as Ardhanareeswara. The Goddess is venerated as she is renowned for bestowing her worshippers with several siddhis (fulfilment or perfection).

Maha Navami suggests the great ninth day. It is assumed that on this day, Maa Durga manifested into the form of Mahisasur Mardini to slay Mahishasura, the demon who was causing havoc in the universe. Goddess Durga declares war against Mahishasura and Maha Navami is meant to be symbolic of the final day of the battle with the demon. 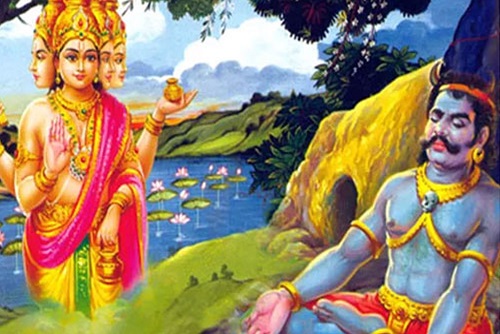 According to the Maha Navami story, Mahishasura was a demon with exceptional supernatural powers. However, the Asuras (demons) always lost their war against the Devas (demi-gods). Since they were tired of always being overpowered, Mahishasura vowed to alter things. He chose to give up his sleep, food and all the comforts of his life and meditated on Lord Brahma – believed to be the creator of the universe and all life. He performed penance for numerous years with utmost sincerity and steadfast devotion and focus.

Lord Brahma was extremely happy with his dedication. He showed up in front of Mahishasura and granted him a boon where he could desire anything and that his wish would be fulfilled. Mahishasura requested Brahma to grant him a boon that would make him invincible and impossible to defeat by a man or God. His immense arrogance led him to believe that no woman could ever defeat him. Lord Brahma granted the boon to him.

Then, Mahishasura caused havoc and released his reign of terror. Soon, he seized the earth. Next, he attacked the heavenly residence of Indira, the King of Devas and conquered it as well. The Gods attacked him with powerful weapons but they were unfortunately proved to be futile. Mahishasura came across as someone who could not be defeated which immensely frustrated them.

They turned to Goddess Parvati for help. She instantly assumed the form of Goddess Durga. She had ten hands, fiery eyes and was decked with gold ornaments. She looked gorgeous and yet ferocious at the same time. She rode a lion as the fierce animal was her vahana and launched herself into the war with Mahishasura.

Mahishasura was extremely strong with exceptional and extraordinary powers. He could shapeshift between the human and buffalo forms. Durga and Mahishasura battled for nine days. On day 10, Durga stabbed Mahishasura’s heart with a spade and slew him. Then, Goddess Durga put an end to the terror that was afflicted upon heaven and earth, which had mostly been conquered by Mahishasura. Since then, this auspicious day is commemorated as Maha Navami. Day ten is observed as Vijayadashami (meaning both ‘victory’ and ‘10th’), a triumph of good over evil.

How is Maha Navami Celebrated?

However, Durga Balidan is always performed on Uday Vyapini Navami Tithi. As per Nirnaya Sindhu, the correct time to do Balidan on Navami is Aparahna Kaal. Navami Homa is done on Maha Navami and it is a vital ritual during Durga Puja. The best time to do Homa is after the Navami Puja.

On this auspicious day, Goddess Durga is prayed to as Saraswati – the deity of knowledge and wisdom. In Southern India, Ayudha Puja is organized, and along with the Goddess, devotees also venerate tools, pieces of machinery, musical instruments, books, equipment of all types including automobiles are adorned and venerated. This day is believed to be imperative before beginning any work on Vijaya Dashami. Children begin to go to school on this day in several places in Southern India.

In North and East India, Kanya Pujan or Kumari Puja, or Kanak Puja is performed on this day in several places. As per this ritual, nine young virgin girls are venerated as nine forms of Goddess Durga. Their feet are cleansed, they apply Kumkum and sandalwood paste on them, they are presented new clothes to wear, and then they are revered with the Maha Navami mantra and incense sticks.

Special food is prepared for them and they are given gifts as tokens for love and respect by the worshippers. The Goddess is presented with pink flowers and worshippers also tend to be draped in pink clothes as pink is believed to be the colour for Maha Navami. Along with the puja, young girls are served the traditional poori, Kala chana and halwa.

In Eastern India, Maha Navami is believed to be the third day of Durga Puja. This begins with a holy bath after which Shodashopachara puja is performed. On this day, Devi Durga is venerated as Mahishasuramardini, suggesting the Goddess who slew Mahishasura, the buffalo demon. It is assumed that on this day, the demon was finally obliterated.

In West Bengal, huge tents called ‘pandals’ are established which have attractively sculpted and decked statues of the Goddess in her avatar as Mahishasuramardini. Devotees pay a visit to these ‘pandals’ as well as temples, decked in all their finery, along with their family and friends. Loved ones are distributed sweets and gifts.

A special ritual of Navami Hom is performed at the end of Mahanavami Puja. It is also said that puja performed on this auspicious day is tantamount to the puja conducted on the nine days of the Navratri festival. In specific places in India, the ancient tradition of Navami Bali or sacrificing animals is still practised.

In specific areas of Andhra Pradesh, the Batthukamma festival happens on Navami. The inspiration for the name comes from a pretty flower. The puja is performed by Hindu women and the flowers are organized in the typical seven-layer form in a conical shape and are presented to Goddess Gauri – a form of Durga Devi. This festival commemorates the glory and magnificence of womanhood. Women are draped in new clothes and adorned with jewellery on this auspicious day.

Other pujas that happen on this day are Saraswati puja and Dampati Puja. In Mysore, on this day, the Royal sword is venerated and is carried out in processions on decorated elephants and camels.

Why We Love Maha Navami?

Epitomizing Triumph of Good over Evil
Maha Navami is an auspicious festival that commemorates the victory of Goddess Durga over Mahishasura. Maha Navami reminds us that however powerful evil might be, it will always be conquered by good in the end.

Celebrating Feminine Strength
Maha Navami honours feminine strength. Mahishasura was slain by a woman so Maha Navami is the day when womanhood is commemorated.

Explores Hindu Mythology
Hindu mythology is packed with intriguing and captivating stories. This auspicious day offers us a chance to go deep into the world of Hindu mythology and unravel more interesting tales.