The name 'Mahamrityunjaya' is a combination of the words Maha(great), Mrityun(death) & Jaya(victory), entails a deeper meaning, which is Victory over Mrityun (Death). Thereby clearly denoting the primary purpose of the Mahamrityunjay Mantra. The Mahamrityunjaya Mantra comprises of 32 syllables. 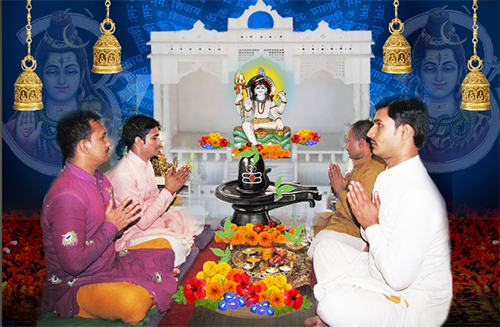 Because of the fact that Mahamrityunjaya Mantra is extremely powerful in healing, this Mantra holds a really high position among all Mantras. It is easily one of the most popular Mantras which is chanted widely, especially by devotees of Supreme Mahadev. The purpose of Mahamrityunjay jap(chanting) is mainly concerned with conquering spiritual death and not physical death. The Mahamrityunjaya jap helps attain Moksha(liberation from cycle of birth and death) and many who regularly chant this Mantra, do so with this intention. Maha Mrityunjaya Mantra effects are palpable if meditating by chanting this mantra.

The Maha Mrityunjaya Mantra in Hindi script or Devanagari script, in English script is easily available on internet.

Maha Mrityunjaya Mantra meaning - We worship the pleasant-smelling three eyed Lord- Shiva who provides nourishment to all the living beings, while praying him, we bespeak of a prosperous & healthy life & liberation from death.

Miracles, Effect or power of Chanting Maha Mrityunjaya On The Brain:

There are many miracles of Maha Mrityunjaya Mantra, which have been recorded down the years. It is well known that Mantras have Divine positive effects and every word of Mahamrityunjay Mantra lyrics has profound healing effect.

Coma Patients helped by Mahamrityunjaya Mantra: A scientific study conducted in an Indian hospital concluded that the powerful Mahamrityunjay Mantra, chanted repeatedly to Coma patients with severe brain trauma, increased their survival rate by more than twenty-five percent. The mantra acts to stimulate the energy of the inner self and helps to unite the conscious mind with other portions of the Self, the Mahamrityunjaya Mantra works wonders. Did you know that the natural healing of sound can also happen when a person does such a simple thing as listening to the rain? Have you heard of the Mozart Effect? Studies show that listening to Mozart can relax listeners as well as greatly improving their communication and creativity. In the present time healing with vibration and frequency of sound is a well accepted and popular healing tool.

Impact of Mahamrityunjay Mantra on severe brain injury: The study at Delhi’s Ram Manohar Lohia hospital funded by the Indian Council of Medical Research showed that the Mahamrityunjaya Mantra when chanted for the patients of brain injury did impact them. The 40 patients were divided into two groups, where the prayers were administered for one group and not the other. The entire study has been conducted for three years from October 2016 to April 2019.

Once a sage named Mrikandu with his wife named Marudmati went into deep meditation seeking the blessing of Lord Shiva desiring a son. When ord Shiva was pleased by the devotion He granted the couple the desired boon which came with a choice of condition. The choice was to get a son who's foolish and who will have a long life or to get a level headed son with a short span of life. Out of two, the couple accepted the boon with condition that had a short life for their son.

They soon had a son born shortly who was named Markandeya. Sage Mrikandu & wife Marudmati were always worried & day by day as their son was growing, they grew sadder thinking that their son's life is nearing death. Markandeya on his 16th birthday realized there is some secret about his life that the parents are trying to hide. On insisting with his parents, he got to know the story behind his birth. Markandeya being a firm Believer of Lord Shiva started chanting the great Mahamriyunjaya Mantra with full devotion seated in front of a Shivling.

Death of Yamraj led to mayhem across the Universe, looking upon this incidence as disturbance and needless violence, all Devtas requested Lord Shiva to revive Lord Yamraj. Lord Shiva accepted the request on the condition that Markandeya shall remain alive and untouched forever. Later Markandeya became known as a Sage/Rishi and is believed to be alive even today.


Maha Mrityunjaya Jaap Vidhi (When to chant & how many times)

The Mahamrityunjay Mantra can be chanted by anyone, at any time. However the proper Maha Mrityunjaya Jaap vidhi suggests that the chanting should be done early in the morning after taking a bath. Do the Achamana, do a few rounds of Pranayam or breathing exercises to focus, facing the East direction sit on an Asana and then do the chanting of the Mahamrityunjaya Mantra. Chanting on a Rudraksha mala increases the intensity of the japa. The chanting can be done 1, 3, 5, 11, 21 or 108 times with complete concentration and pure intension. Some wise men opine that chanting the Mahamrityunjay Mantra chanted with devotion even once during the day can have beneficial effects.

Just one round (one rosary, mala) of this mantra starts giving desired results. This mantra can be chanted any time of the day. The Mahamrityunjaya Mantra can be chanted individually and can also be chanted in small groups sitting in a circle. However, the Mahamrityunjay Mantra is most powerful when chanted in large groups sitting in even, orderly rows. It is most beneficial when performed on an empty or at least half-empty stomach. It is best to use your japa mala, but any other mala of your choice can also be used. The mantra is chanted 108 times in a constant fixed rhythm.

When finished chanting, sit back & relax for some time in silence and soak in the energies. Gradually you will be aware of a protective psychic energy field which is created around you with the chanting of the Maha Mrityunjaya Mantra.

The life-giving Divinely powerful Maha Mrityunjaya mantra benefits are innumerable. As per the ancient Hindu texts, chanting of the Mahamrityunjay Mantra on a regular basis or as frequently as possible acts like a healing medicine for almost all problems in life. Chanting of the Maha Mrityunjaya Mantra gradually builds up the positive energies to give rich nourishment spiritually, mentally and emotionally. Divine Lord Shiva is well known as the benevolent One who is easy to please and chanting the Mahamrityunjay Mantra with genuine devotion and in surrender to the Lord can bestow endless blessings.

The very natural consequence, spiritual awakening through practice of meditation with the Japa of Maha Mrityunjaya Mantra frees one from the vicious cycle of rebirth & death & the devotee attains Moksha.

May the Mahamrityunjaya mantra uplift your life and help you overcome all the obstacles & hurdles that come in your life.