Saraswati - The symbol of knowledge, art, wisdom and education 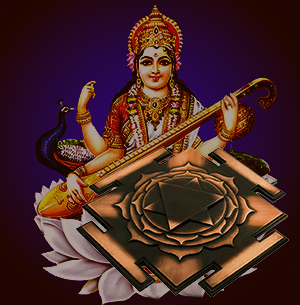 Saraswati, the Goddess of knowledge and art, is one of the prime deities in Hinduism. The name Saraswati is derived from Sanskrit words "saras" meaning "flow" and "wati" meaning "a woman". Thus, Goddess Saraswati imparts endless knowledge to her devotees. It also refers to the flow of wisdom and consciousness. From Vedic times, Goddess Saraswati is regarded as the bestower of wisdom, education, intellect and speech. She is also referred as Vak devi (Goddess of speech) and Sakala kaladhishtatri (Goddess bestowing all the arts). Maa Saraswati is also regarded as the mother of the Vedas, Hence before beginning and ending the Vedic lessons the ‘Saraswati Vandana’ is recited. Goddess Saraswati is the consort of Lord Brahma and the daughter of Lord Shiva and Goddess Durga. It is believed that one who worships Goddess Saraswati is blessed with wisdom, knowledge, speech, creativity and learning. According to the iconographic attributes, Goddess Saraswati is seen with a sacred scripture in one hand and a lotus in the other, these are the symbols of true knowledge. She is seen playing the musical instrument called Veena with the other two hands. Maa Saraswati is also seen draped in a white saree signifying transparency. She is seen seated on a white swan which signifies Sattwa Guna (purity) and tolerance.

In order to be blessed with wisdom, knowledge, speech, creativity and learning you can install the Saraswati Yantra in your house, office or even wear it as an ornament or amulet. The Saraswati Yantra is a sacred instrument that consists of a figure or symbol characterized by simple geometric forms arranged in a symmetric design that resonates with the powers and positive frequencies of Goddess Saraswati. This mystical religion based diagram has the power to attract the principles of Goddess Saraswati and carry the signification of a mantra or process. This powerful Yantra resonates with the positive energies of Maa Saraswati and blesses the worshipper with sharp mind, enhanced memory, creative brain and positive thinking. This Yantra is ideal for knowledge seekers, students, artists and music professionals.

Saraswati Yantra - An object of Meditation

This Yantra can also be used for meditating over Goddess Saraswati. This will help in making you more focused and mentally stable. It will also aid in attaining union with God through geometric visualization. This Yantra is the window through which you can align with divine energy. Through resonance it connects you to the energy present in the macrocosm.

It is very important to place the Yantra in the appropriate direction. Yantra energizes the location where it is installed. You may place it near the entrance of your home/office/shop or in your living room or reception or study room or office cabin. You may keep it on a table or use as a wall hanging. Yantra is best placed in the East direction facing west. It gets energised by the rays of the rising Sun and with the divine vibrations of the East corner and provides positive transformation energies to the dwelling through its mystical geometry. The vibrations of the yantra will create an aura of positive energy around you.

Yantra are the ultimate answer for establishing a vibration of large amplitude or resonance with the benefic energies of the cosmos. Thus the vibration generated gets us in contact with highly elevated energies & entities which put us on a spiritual path resonant with the principles of the deity of that Yantra When you look at the Saraswati Yantra, you will notice certain symbols that are engraved or printed on it. These symbols consist of Shatkona (hexagon or star shape), which is an archetypal amalgamation of two triangles structured in all the Yantra. It characteristically signifies the divine unification of Shiva (Male energy) and Shakti (Female energy) which is the cause of all creation and the other symbol known as the Padma (divine lotus) which represents the unconditional force of the Supreme Absolute Truth i.e. detachment. The lotus serves as a divine seat for Devas (Gods). It grows in the mud but never touches even a tinge of mud, representing detachment to the external forces (material world) and maintaining the original nature which is pure and divine.