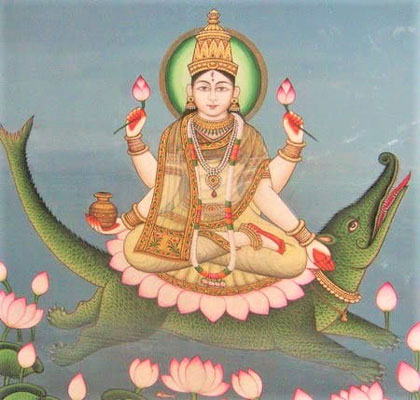 Ganga Dussehra also known as Ganga Gangavatara/Jeth Ka Dussehra is falling on June 1, 2020 Monday. It is a festival celebrated in honour of River Ganga (Ganges). On this day Mother Ganga descended to the earth to rid the souls of King Bhagirath’s forefathers of a curse. It is different from Ganga Jayanti which is celebrated to mark her rebirth. It is said that Mother Ganga lived in heavenly abodes constantly pleasing the gods and other divine personalities. The earth was purified and attained heavenly status after Ganga descended.

Ganga in India is considered a goddess and revered as Ganga Devi or Ganga Maa. This festival is also known as Gangavataran. Ganga Dussera is celebrated on the tenth day of the Shukla Paksha (waxing Moon) of the Jyestha month, as per the Hindu calendar, which generally falls in the month of May-June. It is celebrated over ten days with Ganga Dussera being the last day. It is most popularly celebrated in the states of Uttarakhand, Uttar Pradesh, Bihar and West Bengal, with the famous cities like Rishikesh, Haridwar, Varanasi, Patna, Garhmukteshwar and Prayagraj observing this festival with enthusiasm, as these cities are situated on the banks of Ganga. This festival also is to pay homage to the flowing water of the Ganga which has rich contribution to agricultural irrigation. The water of Ganga is considered perennially pure and ever forgiving. The pure and sacred water of River Ganga is the 'Holy Water' which is sprinkled in all auspicious religious occasions/ pujas. Goddess Ganga's mount is the Makara or Crocodile. 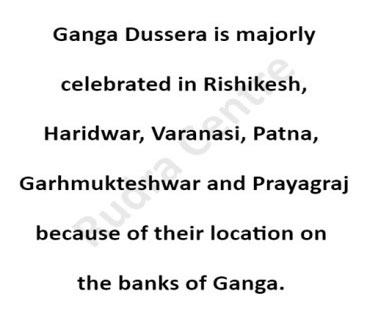 On Ganga Dussera the devotees take a dip in the sacred river which is considered to absolve all sins or 'papa', purifying the individual and it is also said that physical ailments are washed away in the waters of Ganga. In fact bathing in Ganga all the ten days of this festival is said to abolish sins of ten lifetimes and give salvation. In the Ghats or banks of these places elaborate Aartis are performed in front of the idol of Ganaga Devi and also the flowing water of the river with thousands of devotees gathering to participate in this ritualistic worship of Goddess Ganga.

At Haridwar, the fervor and mood of Ganga Dussera is especially mentionable as it attracts tourists from other countries who come to see and experience this celebration on the banks of Gnaga. The divinely beautiful sight of lit Diyas which are floated by devotees to honor Goddess Ganga, seek Her blessing and pray for fulfillment of wishes is truly a once-in-a life-time experience. The famous Dashashwamedh Ghat in Varanasi too celebrates Ganga Dussera with fanfare and many rituals including taking 10 dips in Ganga and the floating Diyas in the calm waters of the river. 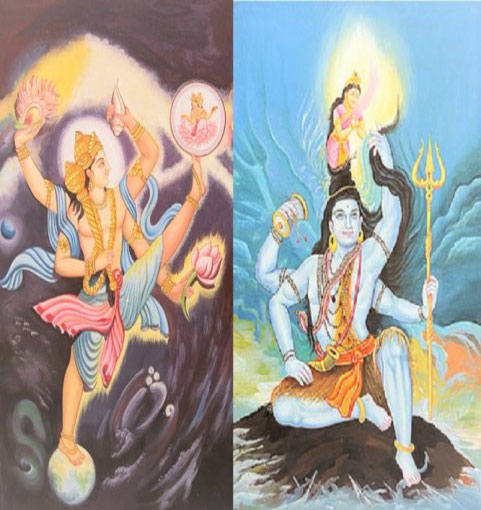 The Legend of Ganga's birth comes from the Bhagavata Purana which states that when Lord Vishnu in His Vamana avatar was measuring the Universe, He stretched His left foot to reach the end point of the Universe. At that end point of the Universe He pressed the nail of His big toe to make a hole from which sprung the Divine Brahm-water, the Causal Ocean, which then flowed to the Universe as the River Ganga. Ganga is also known as Bhagavat-Padi or Vishnupadi because it first touched the Lotus feet of Lord Vishnu. Ganga reached and found its home in Lord Brahma's abode, Brahmaloka/ Brahmaputra, prior to Her final descend on Earth.

King Bhagiratha was instrumental in Ganga's avatarana to Earth. The story says that Bhagiratha was a descendant of King Sagara, whose magically created sixty thousand sons were burnt to ashes by Sage Kapila, whose rigorous meditation was disrupted by King Sagara's sons. The souls of Sagara's sons were wandering as ghosts as there was no final rites which could be performed for them. The nephew of the sons of Sagar, called Anshuman and later his son Dilip prayed all through their life so that Lord Brahma would let River Ganga descend on earth to purify the souls of Sagar's sons and liberate them but they failed. Years later King Bhagiratha, son of Dilip, took on this task and through his prayers managed to convince Lord Brahma to let Ganga come down to earth. However Ganga felt insulted and with Her full force, intending to sweep the Earth away fell on Lord Shiva's head. The Divine Lord Shiva trapped Her in His hair, which stopped Her flow and Bhumi Maa (Mother Earth) was saved. Later Bhagiratha requested Lord Shiva to release Ganga so that She could cleanse the souls of his ancestors.


Ganga in Mahabharata and Rig Veda

The great epic Mahabharata has mention of Ganga/ Goddess Ganga. She was the wife of Shantanu and the loving mother of one of the main characters of the epic, the patriarch and heroic warrior, Bhisma. The narration of Mahabharata describes Goddess Ganga taking Her human form, rising from the river and being a mother crying inconsolably over the body of her son Bhisma, when He is fatally wounded in the great battle of Kurukshetra.

Ganga is also mentioned in the Rigveda which is considered is an ancient Hindu text and considered the holiest of all. In the Nadistuti of the Rigveda while mentioning the rivers which flow from the east to west of our country, Ganga is mentioned. However it is not very clear whether that refers to River Ganga. 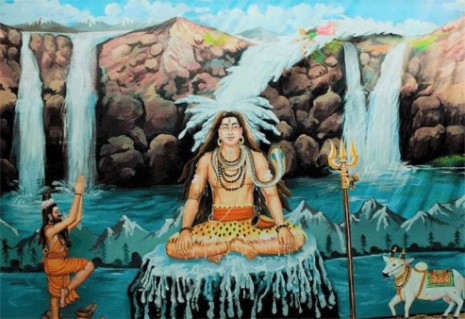 As per Vedic scriptures, King Sagara was a celebrated king of the Suryavansha dynasty in the Satya Age (Satya Yuga). Married to the princess of Vidarbha, and the other princess from the royal Sivi dynasty, the King was an ancestor to King Bhagiratha, King Dasharatha and Prince Rama (An incarnation of Lord Krishna)

Once upon a time, King Sagara with the help of qualified Brahmins performed a sacrifice called Ashwamedha Yajna. This was in order to prove the King’s sovereignty. The King of Heaven Indra began to fret over the results of the sacrifice and he then stole the horses through his mystic powers. Later, Indra left the stolen horses at the ashram of Sage Kapila who was mistaken by the King’s sons (60,000 in numbers) for the thief. As a result, they all prepared to attack the humble sage. Before they could commit this immoral act of killing a divine sage, Kapila cursed them and their bodies burned them all from inside. Sage Kapila returned the horse to Anshuman, grandson of King Sagara, and informed him that all the sons of the King could be freed from the curse if Goddess Ganga (Ganges) descended to Bhumi, Earth and purified them in her waters.

The King’s great-great-grandson, Bhagiratha performed a severe penance and pleased Goddess Ganga to descend into Mother Earth. However, the Goddess reminded him that Her incessant currents of water would devastate the earth and expressed a wish to have someone who could break the water flow. Bhagiratth began to pray to Lord Shiva to break the flow of water. Lord Shiva, pleased with his devotion, fulfilled his wish and took on Him the flow of water onto His head. Later, all the sons of King Sagara returned to life and achieved their eternal posts in the heavens.

The prime duty of a devotee on this day is to take a dip and bathe in River Ganga. If it is not possible to visit Ganga River, one can sprinkle some drips of Ganga Jal (holy waters of the River) over the head while taking bath.