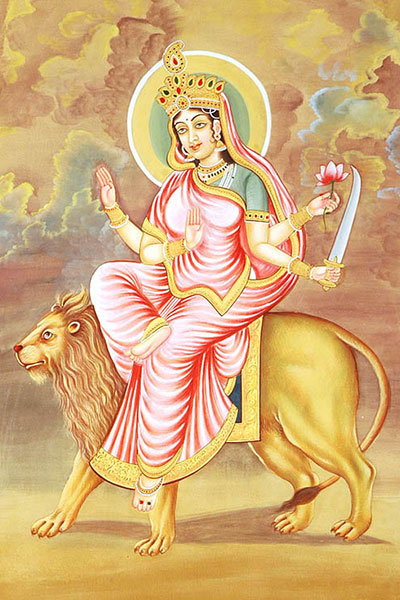 Katyayani Maa is worshipped in Navratri.

Who is Maa Katyayani?

Goddess Katyayani is one of the fiercest Goddesses among the Nava Durga’s. She is worshipped in Navratri . She is one of the highly revered forms of Goddess Durga and is known to destroy the evil. According to the iconography, She has four hands and holds a long sword in one of Her hands and a lotus in the other two Hands. With Her fourth hand she blesses Her devotees as Her fourth hand is in Abhaya mudra.

According to the ancient texts, Years ago there lived a sage known as 'Kat' who had named his offspring as 'Katya'. After a period of time Katya’s decendent was born who came to be known as sage 'Katyayan'. Sage Katyayan had no children. He did a lot of penance and worshipped and prayed to the gods to get a kid. During that period, the evil spirit Mahishasura was causing a lot of trouble and created a lot of problems for the gods. His persecution was expanding step by step. The divine beings moved toward Vishnu to looked for an approach to end Mahishasura. At Vishnu's command, Shiva and Brahma went along with him and after that the Trinity (as Vishnu, Shiva and Brahma) transmitted flames. These flares took the form of Goddess Katyayani. It is said that because Goddess Katyayani took birth as the child of Sage Katyayan, She was named as ‘Katyayani’. Goddess Katyayani was born to put an end to the evil spirits and was conceived as a warrior. She had a shining structure with three eyes, eighteen hands and was refulgent as a thousand suns. All the gods gifted goddess Katyayani with weapons to kill the demon Mahishasura. Shiva gave Her a trident, Vishnu gave Her a disk (Sudarshana Chakra), Varuna gave Her a conch shell (shankha), Agni gave a dart, Vayu gave a bow, Surya talented Her a quiver, Indra skilled a jolt, Kubera gave Her a mace, Brahma talented Her a rosary and a water pot, Kala gave Her a sword and a shield and Vishwakarma gave Her a fight hatchet and numerous different weapons. Goddess Katyayani mounts on a lion. Armed with all the equipments, Ma Katyayani continued towards Vindhya Mountains where Mahishasura lived. 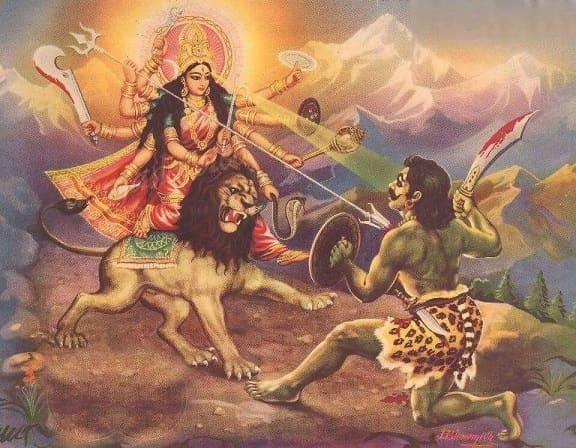 There is a fascinating story on the introduction of Mahishasura. His dad Rambha, was the lord of evil spirits (asuras). He once began to look all starry eyed at princess Mahishi, who was reviled to be a water wild ox. Mahisha is the Sanskrit word for wild ox. Mahishsura was conceived out of the association of Rambha and Mahishi. Because of his genealogy, he had the option to change structure between an asura and wild ox.

A fierce fight occurred between Ma Katyayani and Mahishasura. She killed him by beheading him with a sword. The killing of Mahishasura is celebrated and observed as Durga Puja in various parts of our country (India). She is likewise named as Mahishasuramardini, the person who executed Mahishasura.

As indicated by Bhagavata Purana, youthful eligible young ladies in Gokula observed fast during the whole month of Margashirsha and offered prayers to Goddess Katyayani to get Lord Krishna as their consort. It is mentioned that these women created idol of goddess Katyayani with earth and clay and worshipped it. From that point on, it is accepted, that young ladies who fast and pray over goddess Katyayani will get commendable spouses. In Tamil Nadu, Devi Kanya Kumari, the virgin goddess is said to be a symbol of Ma Katyayani. She is venerated during the Pongal which additionally harmonizes with Makar Sankranthi.

It is believed that Maa Katyayani Devi who is also referred to as the 6th Navratri Devi blesses unmarried girls to get the desired groom. It is said that if unmarried women offer prayers to 6th Day Navratri Devi by chanting the Katyayani Mantra for Marriage along with the “Om Katyayani Mahamaye” Mantra 108 times, their wish of getting married is fulfilled and they are blessed with the most compatible partner. The Katyayani Mata Mantras are very fruitful. Even married couples who face problems in their marriage can chant Katyayani Mata Mantra for restoring peace and love in the married life.

How to do Maa Katyayani Puja?

In case if you miss out on one or more ingredients substitute it with Akshat, Now let us take a look at the Puja Vidhi

This is how you can perform the Katyayani Devi Puja Vidhi.

It is said that apart from marriage, performing the Maa Katyayani Puja helps devotees to excel in their work fields and higher studies. Honey is considered as significantly important while worshipping Maa Katyayani and hence it must also be included in the Prasad. 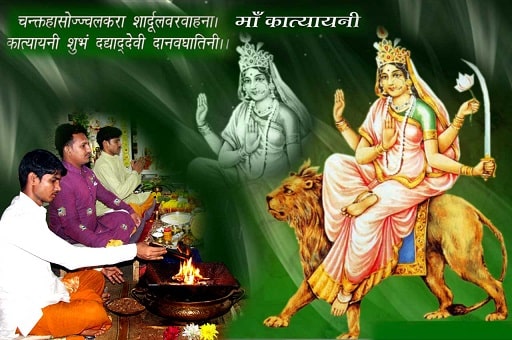 The word Mantra is obtained by combining two Sanskrit words ‘Manas’ which means mind and ‘Tra’ which means tool. Thus, mantra literally means the tool of the mind. Mantras hold immense powers that create vibrations on a Higher Spiritual Realm. Chanting the Katyayani mantras create a strong vibration which resolves issues that are generated amongst married couples and amplifies the love in the relationship thus resulting in a harmonious married life. It creates an aura of positivity and safeguards an individual from obstacles that come in his/ her way. Chanting the om katyayani mahamaye mantra 108 times paves way for a successful career, aids in getting a suitable partner and wards off all the negativity.