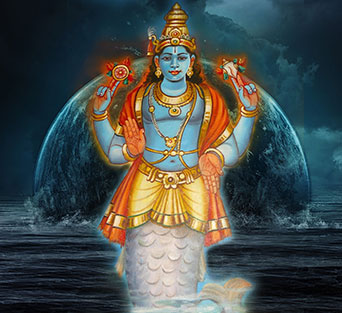 Matsya Jayanti (15th April 2021, Thursday) marks the Fish incarnation of Lord Vishnu. In the Vedic scriptures like Vishnu Purana and Srimad Bhagavatam, it is mentioned that in the Satya Yiga, the Lord assumed the form of a giant fish or Matsya. It was the first incarnation before others. This day occurs during Chaitra Navratri and is considered highly auspicious for Vishnu puja.

All the Vedic scriptures praise and sing the glory of Lord Vishnu, considering Him to be the ultimate beneficiaries of all the sacrifices (prayers) offered. The Lord takes different avatars (Incarnations) and descends to perform superhuman acts and pastimes in order to attract His devotees and other saintly humans. There are two objectives behind the appearance of Lord Vishnu in His different avatars. First, He attracts and protects His devotees and recalls the fallen souls. Second, He destroys the evil forces that threaten the pious and the existence of cosmos.

“Whenever and wherever there is a decline in religious practice, O descendant of Bharata, and a predominant rise of irreligion – at that time I descend Myself.” (4.7)“To deliver the pious and to annihilate the miscreants, as well as to reestablish the principles of religion, I Myself appear, millennium after millennium.” (4.8)In the above verses, the divine missions are absolutely made clear. Millennium after millennium signifies that it’s a continuous process. Evil forces keep creating the disturbances. Devotees always pray to the Lord to save the innocent from such forces. And the Lord pleased by their prayers incarnate in His divine avatars in order to fulfill His missions.

Matsya Avatara: This is the fish incarnation of Vishnu. He once rescued Manu and the great Seven Sages ‘saptarshi’ (Kaśyapa, Atri, Vasiṣṭha, Viśvāmitra, Gautama, Jamadagni and Bharadvāja) from pralaya (The Great Flood or Deluge). In this form the Lord had a human torso connected to the rear half of a fish. In the Puranas, it is given that Manu along with other Sages was warned about the Great Flood. He was told to board a boat, being accompanied by the Sages along with all the species of life including grains. While they are crossing the Flood it was Lord Matsya who protected them. The Flood is a period of no activities (material or spiritual) between two creations.


What to Do on Matsya Jayanti: Fasting Rules and Other Activities