Pradosh Meaning | What is Pradosh / Pradosham? 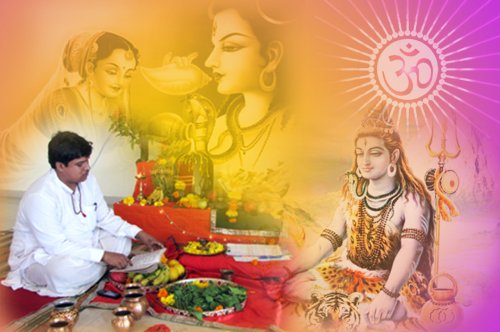 Pradosh, also known as Pradosham, is a bimonthly occasion dedicated to Lord Shiva. It falls on the thirteenth day (trayodashi) of every fortnight in the Hindu calendar. It is an auspicious three hour period of twilight considered the best time for Lord Shiva’s worship. Shiva devotees undertake a fast on this day, known as the Pradosh Vrat. On this day people wear Rudraksha and Vibhuti to perform traditional worship of Lord Shiva with Abhishek, sandal paste, bael leaves, incense and lamps.

According to the Puranic legend, the Devas (gods) appealed to Lord Shiva in the most conducive muhurta of pradosh to seek his help in defeating the asuras (demons). They ran to Mount Kailash on a Pradosh evening and were received by Nandi, Shiva’s sacred bull. Shiva agreed to help them in defeating the asuras. In this way, the tradition of Shiva worship along with Nandi on trayodashi started and continues to this day.

In another legend, Pradosh is the time when Lord Shiva emerged from his stupor (because of the poison he consumed from the samudra manthan) and danced the tandava on top of his Nandi bull. It is believed that during pradosh time, Shiva is in an ecstatic state and blesses anyone who prays to him.
Book Now Pradosh Puja

Pradosh Vrat Katha are engaging and encouraging stories on Pradosham vrat. There are also different Pradosh Vrat stories relating to different types of Pradosh Vrat. Chandra Dev, one of the Gods of heaven and ruler of planet Moon, once suffered from a miserable disease due to a curse given to him. He performed severe penance and offered prayers to Lord Shiva. Pleased by his devotion and prayers, Lord Shiva blessed him and liberated him of the disease on the day of Trayodashi. This day has been revered as the Trayodashi Pradosh. Another Pradosh vrat story is about a poor Brahmin widow who used to live with her son, Mangalia in a small town. She once found an injured young prince of Vidarbha on the riverside while returning home after collecting alms and gave shelter to him. The prince had escaped when the enemy had invaded his kingdom. Since the widow Brahmin along with both her son and the prince used to regularly observe Pradosh Vrat on advice of a sage, few courses of events occurred which were fruitful. The prince once got spotted by a Gandharva (divine being) Anshumati who got fascinated by him and eventually the prince got married to her. Then the prince with help of Gandharva army of his in-laws fought with the enemies and reclaimed his kingdom. As gratitude, he rewarded the widow Brahmin residence in the royal palace and the Prime ministerial post to her son in his kingdom.

What to do on Pradosh? 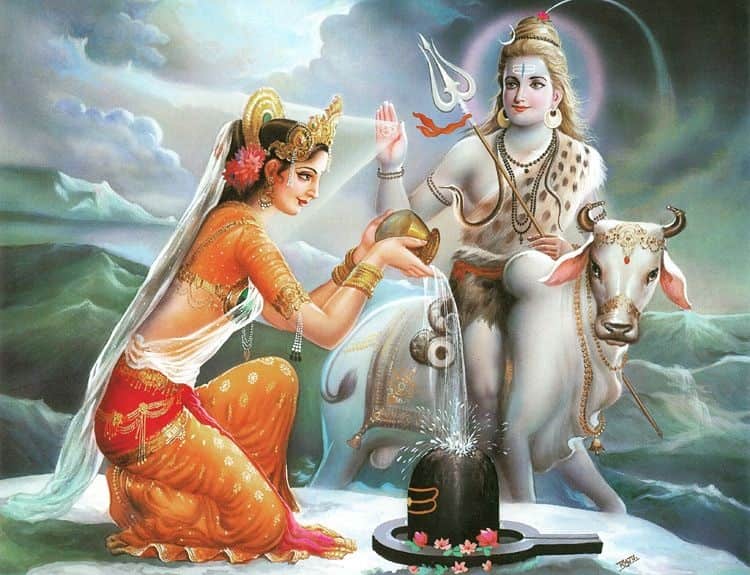 Visiting the Shiva temple in the evening and performing Abhishek is part of the Pradosh tradition. During the time of Pradosh, Nandi bull is worshipped in all Shiva temples. In some places, the idols of Shiva and Parvathi seated on Nandi are carried around the temple complex.

Pradosh refers to the cleansing of sins. It is the most opportune time to remove negative karma by performing a cleansing of our souls. This is done in a symbolic way with Rudra Abhishek, where devotees bathe the Shivalingam with ghee, milk, honey, curd, coconut water and other aromatic liquids. Along with this, they chant Shiva mantra “Om Namah Shivaye”, Mahamrityunjaye mantra, Purush Sookt and Rudram. Performing these rituals with a Parad Shivling is believed to provide manifold benefits. 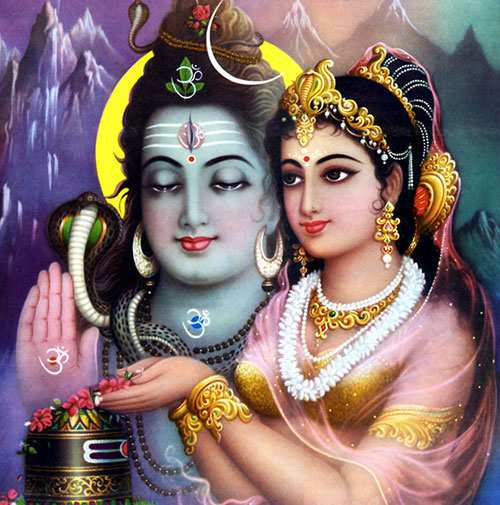 Pradosh is an auspicious day and pradosh meaning in literary sense is the time which is related to the sunset. The Pradosh vrat tithi (auspicious timing) falls 72 minutes before the sunset. The Pradosha vrata holds great importance especially to devotees of Lord Shiva as Pradosh is associated with the Lord. Shiva Parivar- Lord Shiva, Goddess Parvati, Lord Ganesha and Kartikeya, and Nandi are worshipped on this day. Pradosh vrat observed on this day attracts blessings of Lord Shiva and Goddess Parvati along with the blessings of the related planet of the day the Trayodashi Pradosh falls in. People who undertake the Pradosh vrat are believed to be liberated of all past sins, sufferings and worries. The Vrat also helps fulfil one’s deepest desires be it spiritual or worldly.

When to Start Pradosh Vrat?

Pradosh vrat can be started from early in the morning until after Shiva Abhishek after sunset. Basically, Pradosh occurs six ghatikas after sunset and Trayodashi should be prevailing during this time. This is the time when Shiva Abhishek is done. Thus Pradosh fast depends on the time of sunset and varies from city to city.

How to do Pradosh Vrat (Fasting)? 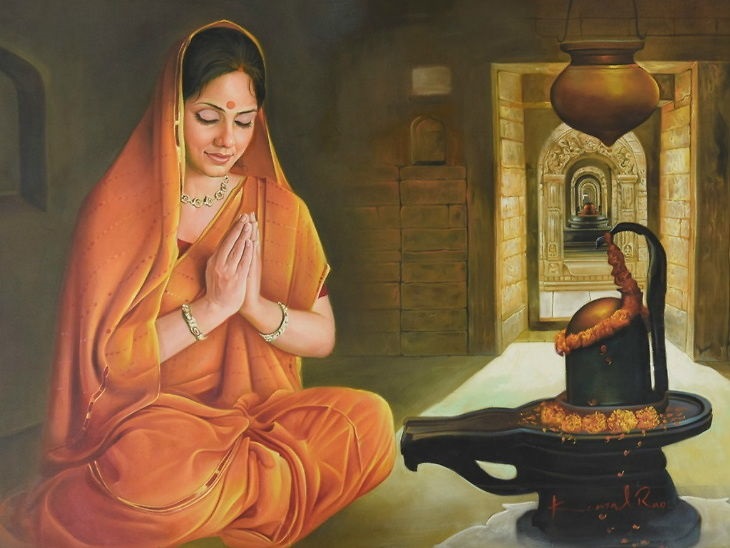 According to the Shiva Purana, a person who observes Pradosh Vrat will attain prosperity, children, and fulfilment of desires. Pradosh Vrat is also undertaken by women who wish to conceive children. The significance of Pradosha Vrat and the Pradosh Vrat Vidhi also finds mention in the Skanda Purana.Some devotees observe fast on both Pradosh days in the month, while others fast only during the Krishna paksha (waning moon). There are two ways of observing the Pradosh fast. Some devotees observe a rigorous 24-hour Vrat without sleeping at night. Others drink only water during fasting and eat the prasad offered after the evening puja. These devotees eat cooked only from the next morning.

Another easier method of Pradosh Vrat is to eat fruits during the day and consume cooked food after the evening prayers later in the day. The rigour of Pradosh Vrat really depends on the willpower and health of the devotee. There are others who do not fast at all but worship Shiva during the twilight time or visit the temple.

Take a bath early in the morning on the day of your Pradosh fast. At twilight in the evening, if you light one deepak during Pradosh hours, Shiva will be well pleased. You can worship Lord Shiva in the form of a Kalash (sacred pot). Fill this Kalash with water and cover it with darbha grass and draw a lotus on the pot. Offer bael leaves to Lord Shiva. After using this water in the puja ceremony, give this as prasad alongside the vibhuti (sacred ash). This Vibhuti can be applied on the forehead as a symbol of Shiva.

Pradosh occurs twice in a month and depending on the day of the week it falls in, the benefits of Pradosh vrat vary. The Shani and Som Pradosh hold special importance on all the Pradosh days. While the Maha Pradhosh is the most auspicious of all Pradosham dates in a year which either occurs before or on the day of Maha Shivratri, falling on the Maagha month of Hindu calendar.

Ravi Pradosh: When the Pradosha of any month falls on a Sunday it is known as Ravi Pradosh or Bhanu pradosh. This day is associated with the astrological planet Sun and on this day the Moon and Sun both planets are active. Observing Pradosh vrat (fast) on this day brings fame, honour, good health, longevity and power. If the Sun is debilitated or malefic in one’s native chart, then this Pradosh is highly beneficial for them.

Som Pradosh: It is the Pradosh day which falls on a Monday, observing Som Pradosh vrat helps fulfil all desires, bring mental peace, harmony and bestows progeny. Being associated with the planet Moon, it is helpful for those suffering from malefic of this planet.

Bhaum Pradosh: When the Trayodashi date falls on a Tuesday of any month, it is called Bhaum Pradosh. Bhaum refers to planet Mars, thus observing Pradosh fast on this day helps reduce the malefic effect of planet Mars. It also helps resolve marital conflicts and issues related to debt and health.

Saumyavara Pradosh: It is the Prodosha which falls on a Wednesday. Pradosha vratham done on this day is helpful for those who wish to achieve happiness in life and attain knowledge, growth in academics and fulfil all kinds of desires.

Guruvara Pradosh: This Pradosh falls on a Thursday which is associated with planet Jupiter, which is also revered as Guru. Benefits of Pradosh vrat on this day includes success in all realms, good health, wisdom, spiritual growth and abundance.

Bhruguwara Pradosh: It is the Pradosh day which falls on a Friday. Being associated with planet Venus, it is a very beneficial Pradosh vrat for marriage. Pradosha vrata done on this day attracts luck, luxury and love in life.

Shani Pradosh: When Pradosh falls on a Saturday, a day dedicated to Lord Saturn or Shani Dev, it is known as Shani Pradosh or Shani Pradosh Vrat. People in whose natal chart Saturn is malefic or those who are undergoing their Sade Sati or Ashtam Shani periods perform worship and upaya for Saturn on Shani Pradosh to gain relief. Performing Pradosh puja on this day also brings balance in life and growth in career.

Pradosh Kaal is a specific period which occurs every month. It begins at the time of the sunset and lasts up to 2-4 Ghatikas post sunset. Pradosh Kaal or Pradosh time differs for every location depending on the sunset occurring at that place. Pradosh Vrat is the fast which is specifically observed only on a Pradosh Trayodashi day (13th day of fortnight of every month). Pradosh Kaal falling on a Trayodashi is considered to be the most ideal and auspicious period for performing puja of Lord Shiva while observing the Pradosha vratham throughout the day.