Yamuna Chhath (Monday, March 27, 2023) also known as Yamuna Jayanti is celebrated to glorify the Yamuna River who descended on this earth on this day. Yamuna is the daughter of Lord Surya and sister of the death god Yama, Vaivasvata Manu and the twin Ashvins. Yamuna is also known as Yamunaji, Yami and as Surya’s daughter, Suryatanaya, Suryaja and Ravinandini.

Celebrated in Chaitra month (March-April), it receives millions of visits from her devotees every year. On this day one can fast and purify all their misgivings, sins or guilt.

Significance of Putrada Ekadashi: Why a male child not Female? 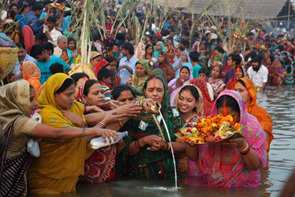 On this day, people observe strict fast and end (Parana) it at sunrise on the day of Chhath (Monday, March 27, 2023). Yamuna River is deeply connected with the divine Lord Krishna who spent His childhood pastimes on its bank along with His friends. In the Puranas and the Mahabharata, she has been described as the most sacred river that sanctifies even the most sinned.

In the Vamana Purana, it is mentioned that when Sati kills Herself, Her husband Shiva madly traveled thought the world and higher planets, ended up being calm and detached from the worldly or domestic affairs. Lord Kamadeva shot an arrow of love at Shiva who was overcome by a love desire. He plunged into Yamuna River to subdue His sexual urge. As a result the waters became black. Later the dark River became home to Kaliya, a giant demonic serpent who was killed by Lord Krishna. After Kaliya’s death, the River with the touch of Lord Krishna’s lotus feet regained Her beauty.


How to Celebrate Yamuna Chhath Puja: What to do?

On the auspicious day one should get up before sunrise and bathe in the Yamuna River. If it is not possible, one can add little Yamuna Jal (water) to the bath water and take bath.  Chant the following mantra while bathing.

"In this water, I invoke the presence of divine waters from the rivers Ganga, Yamuna, Godavari, Saraswati, Narmada, Sindhu and Kaveri.”