In the Siva Purana it is stated: 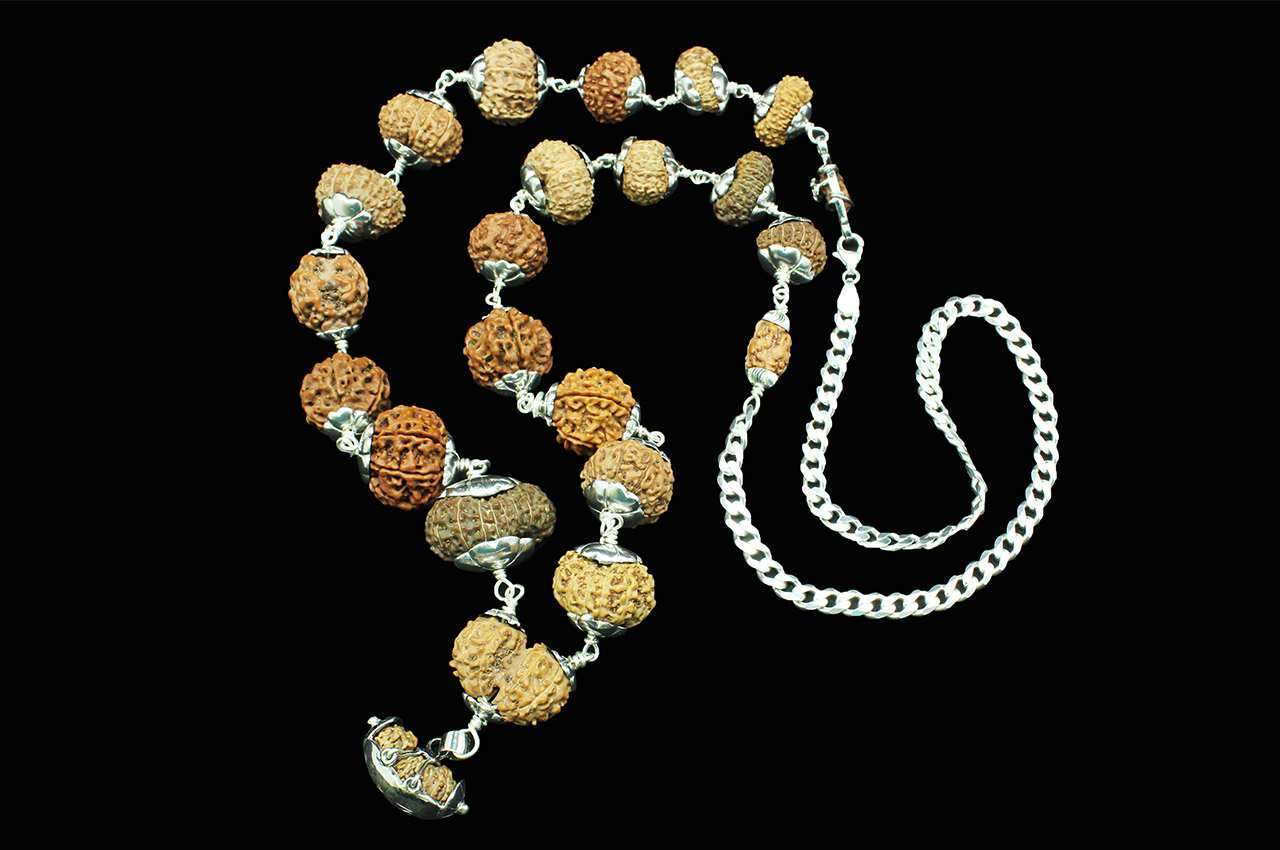 If a person is not liberated after meditation and acquistion of knowledge he shall wear Rudaksha. He shall be freed from all sins and attain the highest goal.

By wearing Indra Mala you are partakeing of the energies of all the Vedic Deities contained in the Holy Rudraksha that make up the accumulated enegy of the Lord Indra Mala.

Lord Indra the Vedic King of Heaven.....God of thunder lightning and rain. Lord Indra is identified with strength on all levels of life both spiritual and material. The combined energy of Lord Indra is known to rule over the atmosphere and sky as well as the god of rain who in vedic mythology rules over the deities of the midregion and fights against and conquers with his thunderbolts the demons or forces of darkness.

In addition to this many Siddhies and Riddies are granted to the wearer of this Indra Mala much in the same way Nyaasa empowers the Jiva through the ritual process in which parts of the human body are empowered with energies of the deities during Puja in order to form a series of microcosmic and macrocosmic relationships within the wearer thus producing or manifesting the Siddies and Riddies of the wearers intent and purpose for the good of all concerned.

The wearer of the Lord Indra Mala place themselves with intent and purpose in the middle of creation and manifestation and destruction of ignorance for the better good of all concerned and they accomplish what is best for themselves and their community and nation as a result.

This results in the wearer gaining Wealth Happiness and Salvation through their many good actions while wearing the Lord Indra Mala.

An example of what Lord Indra Rudraksha Mala Energy can do is similar to results gained in Puja from Jiva Nayaasa ..... or infusing the life of the Deity into the body............and then using this energy to manifest a better life for all.

Includes results of Rishi Nyaasa meaning saluting various deities associated with various parts of the body ......... to maintain an armay of Deities to help with accomplishments.

Includes results of Sadanga Nyaasa meaning the establishment of power in the six limbs all of which distributes power in the body that helps to create a new inner and outer reality for oneself (Siddhies and Riddies) and the world we all live in.

Siddhies are meaning powers or modes of success in the material world and in the Spiritual World with Attainment through Mantra Repetition Meditation and other Yogic Practices. Examples would be the Siddhi Powers of Lord Hanuman as mentioned in the Ramayana and the Sutras of Sri Maharishi Patanjali.

Riddhies are meaning increases in growth prosperity success and wealth on all levels in life for wearer and all who come in contact with wearer.

Wearing Lord Indra Rudraksha Mala also opens wearer to control with intent and purpose over many different aspects of the energies that Lord Indra presides over and pertain specifically to Lord Indra Vedic King of Heaven.

IndriyaAnapeksa meaning a type of perception independent of the senses and is of two kinds........ svayamsiddha or self accomplished and divya or divine......... Accomplishment of this type of perception will also lead to other levels of refined perception called Pratyaksa and Arvaaciina.

IndriyaarthaSannikarsa meaning control regarding contact of sense organs with objects ........... refer to the study of Sannikarsa or sense object contact according to Nyaaya.

IndriyaatmaVadin meaning a type of Caavaaka (Materialist) who considers the senses as the individual.

IndriyaSaapeksa meaning a type of perception dependent on the senses.

In conclusion Indra Mala is one of the most powerful Rudraksha Malas. A jiva can wear and the wearer of this Highly Auspicious Mala actually attains a position of responsibility and authority in conjunction with the energies of Lord Indra King of Heaven.

This Indra Energy affects the wearer and all his good works in this world in a positive manner for the good of all concerned...... Wearer becomes so Purified from Good Works that the Position gained is described similiar to what has been written as follows and is most appropriate at this nearness to time of Diwali.

Antar Jyoti......Light is on the inside

Bahir Jyoti......Light is on the outside

Swayam Jyoti.....I myself am Light