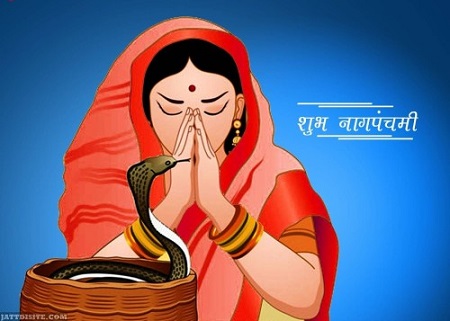 Naga Panchami (July 25, 2020 Saturday) is observed on the Shukla Paksha Panchami during the Hindu calendar month of Savan. As per the Gregorian calendar Nag Panchami falls in month of July or August. It is celebrated two days after Hariyali Teej. On this day women pray for the well-being of their brothers and families. They worship the Nag Devta (the Lord of serpents) and offer milk to them.
The term 'Nag' means serpent/snake/Cobra. The term Panchami means fifth day of either the waxing Moon (Shukla Paksha) or waning Moon (Krishna Paksha), in the Lunar cycle with each phase lasting for 15 days. It is a special day of worshipping snakes by the Hindus. 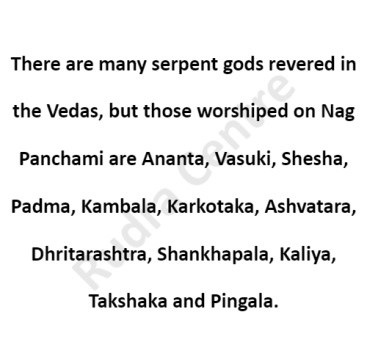 The festival of Nag Panchami is observed by Hindus throughout India and traditionally dedicated to the worship of Nag Devata. As per the Hindu calendar, the worship of serpent god is. The Panchami Tithi especially during the month of Shravan is propitious to worship Nag Devta. Nag Panchami observed on the Shukla Paksha Panchami during Shravan month is highly propitious.

It is believed that any prayers offered to the snakes would be well received by Naga Devata. Hence snakes (as a representation of Nag Devata) are worshipped by the Hindus. There are many serpent gods revered in the Vedas, but those worshiped on Nag Panchami are Ananta, Vasuki, Shesha, Padma, Kambala, Karkotaka, Ashvatara, Dhritarashtra, Shankhapala, Kaliya, Takshaka and Pingala.

Many people observe a fast one day prior to Nag Panchami. This fasting is known as Nag Chaturthi or Nagul Chavithi. In the state of Andhra Pradesh this ritual is observed right after Diwali . It also coincides with Tamil Nadu's six days long festivity, Soora Samharam.

In Gujarat Nag Panchami is popularly known as Nag Pancham. Here it is observed 15 days after all the other states have celebrated the festival. It is celebrated three days before the festivities of Krishna Janmashtami.

Bola Choth or Bol Choth in Gujarat: Bola Choth (also known as Bahula Chauth ) is observed one day prior to Nag Pancham. On this day cattle, especially cows are worshipped.

Auspicious Pujas To Be Performed On Nag Panchami 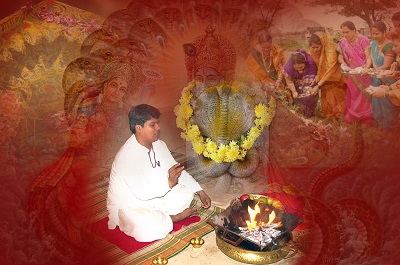 Nag Panchami Puja performed on the day of Nag Panchami is highly auspicious and rewarding. The Vedas consider the Nagas (snakes) very significant and divine. The festival of Nag Panchami is celebrate to offer prayers to the snakes and serpents that are associated with Lord Brahma, Vishnu and Mahesh. Lord Vishnu Himself rests on Ananta Shesha, a thousand-hooded serpent. Lord Shiva always keeps the snake named Vasuki around His neck. Names of 9 Naag Devatas are: Anant, Vasuki, Shesh, Padmanabh, Kambal, Shankhapal, Dhrutrashtra, Takshak and Kalia if prayed daily in the morning protects you from all evils and helps you become victorious in life. 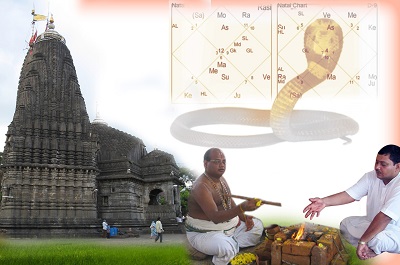 Kaalsarp Shanti Puja performed at Trimbakeshwar Temple during Shravan month and on Nag Panchami is highly auspicious and spiritual. Kaal Sarp Dosh occurs when all the 7 planets are placed between Rahu and Ketu. Kaal means death and Sarp means snake. The person born under Kaal Sarp Yog struggles even after putting appropriate amount of hard work. For individual suffering from Kaal Sarp Dosh success is hard to come by and their financial position remains fragile. Kaal Sarp Dosh can be of two types namely ascending and descending and can cause various problems such as loss in business and family problems.


Benefits of this puja: 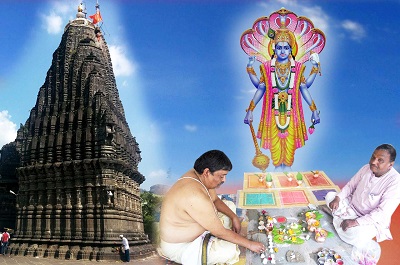 On Nag Panchami, if you perform Narayan Nagbali Pooja, you get rid of most of the issues at personal and professional level. Narayan Nagbali puja aconsists of two different rituals. One is Narayan Bali performed to get rid of ancestral curse (pitru dosh /pitru Shaap) while Nagbali is done to get rid of sin of killing snake, especially Cobra which is worshipped in India. It can be performed only at Trimbakeshwar.

This puja is best for whose facing obstacles in Business, Waste of Money, Family health Problems, Conflicts, education hindrances, Marriage Problems, Accidental Death, Unnecessary expenses and Emotional problems. It is also performed to get rid of problems occurred due to curse from father, mother, brother, corpse, wife and other shaps (Pitru shap, Pratashap, Matrushap, Bhatrushap, patnishap, matulshap). Narayan Nagbali is performed to get respite from various problems. 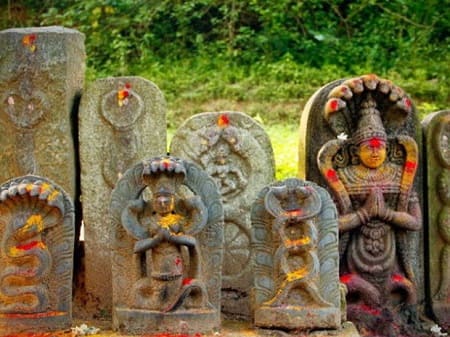 Various stories about the significance of Snake worship exists in Indian Folk tales and in Hindu Mythology.

The Mahabharata as well as ancient Hindu texts state that Lord Brahma's son Kashyapa had married Kadru and Vanita, daughters of Prajapati. The Naga race was born of Kadru. Aruna and the Eagle Garuda were born of Vanita. Aruna grew up to become the charioteer of Lord Surya or the Sun God and Garuda became Lord Vishnu's vehicle.

One of the most popular and accepted legend of Naga Panchami is from the Mahabharata. Janamejeya, the son of King Parikshita of the Kuru dynasty died after he was bitten by the King of Snakes called Takshaka. Parikshita's son Janamejeya was overwhelmed with emotions on his father's death and in order to take revenge was performing a large scale Yagna /Yajna for which a huge Yagna Kund or sacrificial fire pit, was built in order to perform Sarpa Satra a Snake sacrifice. He wanted to sacrifice all snakes of the world.

The Gods approached Mansadevi, the Goddess of Snakes to save the situation and She appointed Her son Astika to go and request Janamejeya to put an end to the sacrifice of Snakes in the Yagna. Astika met Janamejeya and managed to impress him with the immense knowledge of the Sastras that Astika had. Janamejeya wanted to grant a boon to Astika, who took the opportunity and requested Him to put an end to the Sarpa Satra Yagna. Keeping his word, Janamejeya stopped the proceedings of the Yagna and thus Takshak and the race of the Nagas was saved from extinction. The day of this event, when the Serpent/ Snake race were spared was on Nadivardhini Panchami, which means the fifth day of the waxing Moon/ Shukla Paksha during the monsoon season of Sravana month. Lord Indra worshipped Manasadevi for intervening to save His life. Therefore, it is considered a special day of festival for the Snakes or Nagas. 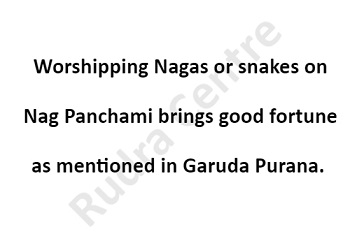 Another tale is about a farmer who killed three snakes while ploughing the land. Angered and enraged, the mother of the dead snakes killed the farmer, his wife and two children by biting them. Fortunately his daughter never came to the curse of the mother snake. She worshipped her with milk and begged for her family's life. Pleased with her devotion, the mother snake brought her family back to life. Scriptural significance: As per one of the Vedic scriptures Garuda Purana, one should offer prayers to the snake gods on this day and offer food to Brahmins.

Nag Panchami is considered a very auspicious day of the year. It is believed that worshipping Nagas or snakes on this day brings good fortune, as mentioned in the Garuda Purana. The ritual of feeding Brahmins too is important after the worship. 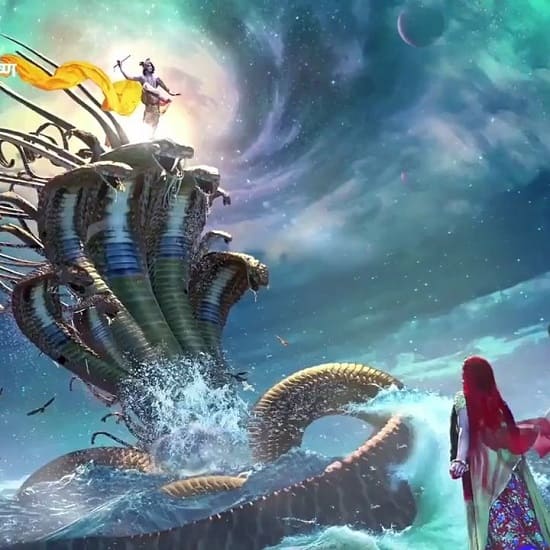 Once, the young Lord Krishna was playing with His friends on the banks of the river Yamuna with a ball. While playing, the ball got caught in a branch of tree, which was quite high up. Young Krishna climbed up the tree to retrieve the ball. Below the tree flowed that part of river Yamuna where the dreaded snake Kaliya lived. Kaliya was of giant size and was used to poisoning the water. People used to avoid that area of the river where Kaliya lived out of fear.

Young Krishna slipped from the tree and fell into that place of the Yamuna. Kaliya surfaced from below the water and a tussle ensued between the two. Ultimately the Lord jumped onto the head of Kaliya and grasped Kaliya’s neck with His hand. Realizing that Krishna was not merely a boy, Kalia begged Lord Krishna to spare him his life and not to kill him. Merciful Lord Krishna released Kaliya with the promise that he will not terrorize or harass anyone from then on. Lord Krishna is also known as Kaliya Mardana.

The festival of Nag Panchami is also celebrated to honour the triumph of Lord Krishna over the snake Kaliya.

Fasting and worshipping snakes by offering milk is an ancient ritual which is followed even today on Nag Panchami. 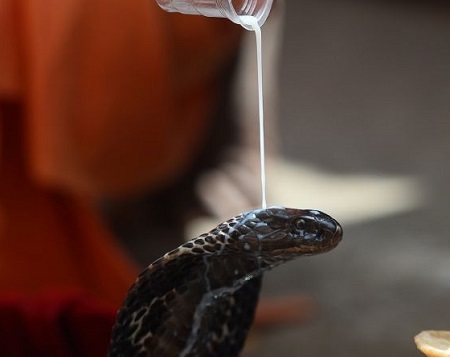 On this day, one can offer milk, sweets or flowers to snakes. Generally, it is risky or even impossible to have a real snake in front worship. One can install the snake gods' deity of stone, wood or even painting. Then, the devotee may purify the deity with sacred bath and offer milk.

Following this, worship the deity reciting this mantra:

'Let all have divine blessings of the Snake Goddess, let all attain peace. Let all live serenely without any turmoil.'
One should observe fast on this day and serve Brahmins with food. The devotion to the Snake god observed on this day is considered divine and protects the worshipper against inauspiciousness. A thousand-hood Ananta Shesha is the greatest devotee of Lord Vishnu who lies on His body. One can also worship Vishnu and Shiva to obtain their blessings.