Who is Maa Siddhidatri? 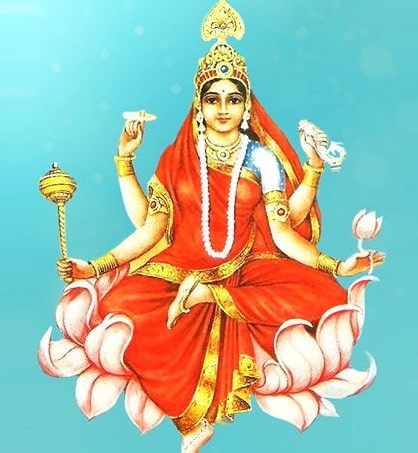 Planet Ketu is ruled by Goddess Siddhidatri. She is the Supreme power who rules the mind of Her devotee and offers motivation to lead a disciplined life that is spiritually elevated. Worshipping Her with complete devotion is said to appease the Goddess who in turn blesses the Sadhaka with great Siddhis. Moreover, She also removes all the fear and puts an end to all the sufferings Her devotees face. She is also known for fulfilling desires and offering true knowledge.

Mata Siddhidatri is the original form of Goddess Parvati. According to the iconography, She is seen draped in a red saree sitting on a Lotus flower which is completely bloomed. She holds weapons in all Her four hands. In Her right upper hand, She holds a discuss on Her index finger. She holds a conch shell in Her left upper hand. She holds a mace in Her right lower hand and a lotus in Her left lower hand. Cladded in ornaments and a beautiful fresh flower garland around Her neck, Siddhidatri Devi looks extremely divine and beautiful in this form. The origin of Navam Siddhidatri is awe-striking. When the universe was only a huge void totally brimming with dimness, there was nothing! No light, no species, no creation, no time, no nature. It was then that a beam of celestial light spread all over the place. This light was so divine and bright that it covered every bit of the void making it visible and lit. This ocean of light was amorphous. After a few moments, this light abruptly began taking a specific shape which ultimately took the form of Goddess Mahashakti Herself. The Supreme Goddess brought into existence, the Trinity of Gods namely Brahma, Vishnu, and Mahadev. Mahashakti made the Trinity understand the reason for their existence.

She guided all the three Lords to observe and understand the respective part each one of them would perform along with their pre-determined set of contributions and responsibilities in order to fulfill their duties towards the world. Obeying the instructions of Goddess Mahashakti, the Tridev walked towards an ocean and in a seated position performed atonements for a very long period of time. Appeased with their dedication and obedience, the Divine Goddess showed up before them in Her most divine form which was of Siddhidatri Mata.

She then assigned Lord Brahma the role of being the one who would create the world, She entrusted Lord Vishnu with the duty to preserve the creation and the creatures that She would produce and She assigned Mahadev with the job of devastating the universes when the time comes. She also informed them that their powers reside in the form of their respective consorts and that their wives would assist them in performing the assigned tasks. She also assured them that She would be blessing each one of them with additional powers and Siddhis which will help them to complete their tasks.

With Her immense Teja (splendor), Goddess Siddhidatri created more other Gods, demons, demigods, the galaxies, universes, planets, solar system, flowers, the trees, the land, the water bodies, the animals, mountains, fishes, birds and everything that co-exists. All the flora and fauna thus came into being and the fourteen worlds were established at the same time. Hence, in Her Siddhidatri form, the Goddess is seen worshipped by Asuras, Devas, Gandharvas, Yakshas, and all the other creations of the world.

As mentioned in the Devi Purana, Siddhidatri Mata was appeased by the Lord Shiva’s worship and blessed Him with eight Siddhis namely

According to an ancient belief, the ‘Ardhanareshwar’ form of Lord Shiva has Goddess Siddhidatri as His significant half. Appeased with Lord Shiva’s worship, Goddess Siddhidatri blessed Lord Shiva with the ‘Ardhanareshwar’ form which is a symbol of Holy unification of divine feminine and male energies. In this form, half body of Lord Shiva and half body of Maa Siddhidatri unified thus creating the most powerful and divine form. As mentioned above, She is the creator of every particle that exists in this space all beings worship Her with utmost devotion in order to appease Her and to receive Siddhis from Her.

How to worship Siddhidatri?

The ninth day of Navratri is also known as Navami. As it is the last day of Navratri, this day is celebrated with great fervor and zeal by one and all. Let us take a look at how Siddhidatri Mata is worshipped. 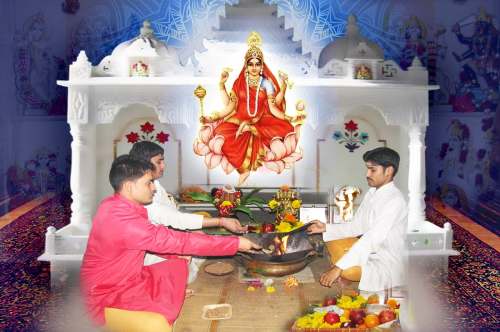