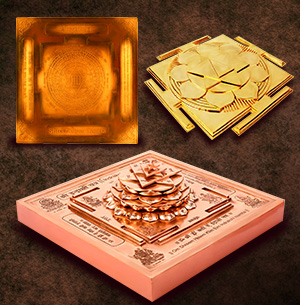 When it comes to Vastu, you always hear about mystic instruments such as Yantra and Pyramids that are used to correct the faults in design. Traditionally Yantra find seat in temples near the deity idols or are placed in altars or near entrances of homes. In South India, Yantra are drawn with Rangoli designs at entrances of homes during religious festivals. The famous Tirupathi temple is in the shape of a Shree Yantra and many attribute its power and fame to this geometry. But what does Yantra mean? How do they work? Are they really beneficial? Let’s get into the bottom and find out the core meaning.

A Yantra also referred as Mandala is a sacred figure or symbol characterized by simple geometric forms arranged in a symmetric design. These are mystical religion based diagrams which have an ultimate reality and are of strong astronomical esthetics. It carries the signification of a mantra or process. It can be etched on a plain surface or made in a three dimensional form or used as an amulet or charm. Adi Sankaracharya's Saundarya Lahiri is an authoritative work on Yantra. The literal meaning of Yantra is: "to control, curb, bind or influence".They can also be considered as diagrammatic representations of different Mantras and thus helps resonate positive energies disperse negative energies and help individual elevate spiritually.

As per ancient Vedic texts there are different kinds of Yantra meant for different purposes. Yantra geometries are three dimensional in nature but are represented as two dimensional when etched or drawn. Different types of Yantra include Planetary Yantra, Numerological Yantra, Yantra for different Gods and Goddesses and others. Yantra represent a Physical force or a creative energy. Yantra in Sanskrit means the chant that awakens energy when you place it anywhere in the environment around you. This energy is said to cleanse the environment and electrify the atmosphere with positivity.

As per Vedic texts the "Sri Yantra" is one of the most powerful and auspicious amongst all different Yantra as it represents energies of all Gods and Goddesses and basically is a representation of your entire Life which is a Play of Goddess Lalita.

Subtle Energy: If you see any divine object such as OM, Swastika or Trident (Hinduism), Cross (Christianity), Moon and Crescent (Islam), they have a distinct shape and this emits a specific frequency and cosmic energy pattern. One can draw a yantra on paper, wood, gemstone, metal, or earth, or can give it a three-dimensional shape. It would attract cosmic energies for Yantra science is based on the sacred Vedic geometries representing scriptural mantras.

Powers of Mantras: A Yantra is composed of geometrical shapes generating a subtle range of cosmic force matching the invoked energy. When you chant a Vedic mantra, the layers of energy in the microcosm vibrate on the same wavelength with the corresponding energy current in the macrocosm. Thus the energy of the Yantra and Mantra comes from the creation as a whole (Macrocosm).

Analogy of a Yantra

When you look at a Yantra, you will notice the certain symbols making up the entire Yantra. These symbols include bindu (dot), trikona (triangle), chakra (circle), shatkona (six-pointed star) (bhupura (square) and Padma (divine lotus)

Bindu: It indicates the energy and its extreme concentration at the centre. It is also called the centre of cosmic radiation. Bounded by different surfaces such as a triangle, a hexagon, a circle, the bindu represents the union with the force or creative energy ruling the yantra.

Trikona: It is the emblem of Shakti, the absolute female energy of the Divine. It completes the creation or manifestation of both, material as well as spiritual worlds. The triangle pointing down characterizes the Yoni which is the source of all creations. Pointing upwards signifies forceful spiritual desire, the transferal of one’s nature into the subtler sphere and the Fire Element because Agni always burns upwards. A triangle pointing downwards represents the Water Element for water flows down. Fire Element represents Shiva and Water Element represents Shakti

Shatkona: It is an archetypal amalgamation of two triangles structured in all the Yantra. It characteristically signifies the divine unification of Shiva (Male energy) and Shakti (Female energy) which is the cause of all creation.

Chakra: It stands for rotation which is central to the functioning of the macrocosmic progression. At the same time, the circle signifies perfection and the peaceful creative void of the Vishudha chakra. In the series of the five fundamental elements it represents the Air Element.

Bhupura: it represents the Earth Element that resides in the physical self. Yantra start with the dot and end with the square. It implies the way the cosmos evolves. It begins with the subtle energies at the centre, with granular at ether and then culminating in earth.

Padma: All the Vedic scriptures as well as the scriptures of other faiths consider lotus to be the divine emblem of purity that resides in the chakras. A lotus in Yantra represents the unconditional force of the Supreme Absolute Truth. The lotus serves as a divine seat for devas (gods). It also represents detachment. It grows in the mud but never touches even a tinge of mud, representing detachment to the external forces (material world) and maintaining the original nature which is pure and divine.

Yantra: An object of Meditation

When the mind is concentrated on a Yantra, the mental chatter ceases. Yantra is an aid to attain union with God through geometric visualization. It is window through which you can align with divine energy. Through resonance it connects you to the energy present in the macrocosm. Yantra increase the intensity of prayers and make the thoughts more strong and influential. The powers of a Yantra thrive on the reverberation of cosmic energies. When you focus at the centre of a Yantra, your mind is pitched into the creative force connected with the yantra used and the energy flows. Your wish and intention of prosperity and affluence along with a Yantra, say Mahalaxmi Yantra, is bound to yield more fruitful results as compared to an intention with the same wishes devoid of Mahalaxmi Yantra.
Yantra work in following ways

Yantra are the ultimate answer for establishing a vibration of large amplitude or resonance with the benefic energies of the cosmos. Thus the vibrations generated get us in contact with highly elevated energies & entities which help us attain spiritual course of conduct in our daily lives & enhance the spirituality within. 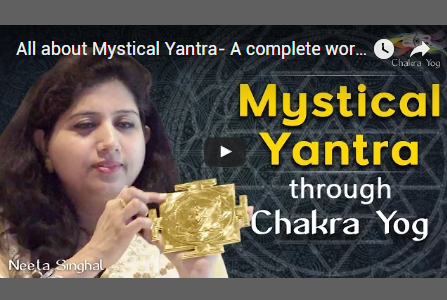 There are four basic variations:

Yantra for success in personal and professional life:

Yantra, besides fulfilling their fundamental purpose, helps prosper in career along with good health, wealth, happiness and success. These are etched in metals like Silver, Gold, Copper and Bhojpatra which are cheaper than gemstones and can be as effective as gems. They are the doorway to the cosmic universe. Maha Meru, or Sri Meru Chakra is the supreme of all Yantra. The transcendent geometry of the Sri Chakra is the genomic code of the Cosmic Space that redirects its positive vibrations to the place it is installed.

The Effect of Yantra on Your Wellbeing

One must always pay attention to the importance of placing correctly energized Yantra in the appropriate direction. They are best placed in the North East part of the dwelling as it is confluence of positive energies coming from the geometric lines from North and the rising sun in the East. However if North East part is not convenient, then it is best to place them closer to you on your desk or on wall or near entrance door. Some Yantra offer results instantly if the karmic potential is ripe. Some offer results gradually over a long period of time. Yantra for wealth and affluence require patience. For instance, Kuber Yantra works better after the first year. Yantra are also exceedingly helpful for health and averting accidents and mishaps.

Some of the Popular Yantra